What was noteworthy in Wellington was that while I am sure there are police that will show the brutal face of state power on the 4 February there are others, as New Zealanders, who are receptive and sympathetic to the message about the selling-off of our Nation and its sovereignty. It is thanks to the actions of some policemen that the goals of the march were met.

TPPA, Wellington – a petition is delivered to the Governor General Today a petition was delivered to the Governor General of New Zealand at the gates of his residence, Government House, demanding that the Governor General protect the democratic rights of New Zealanders by commanding the government to put the question of proceeding with, or withdrawing from TPPA to a binding referendum and to prohibit the government from signing any final agreement unless the People vote in favour.

It became clear when the rally arrived at the gates of Government House that no one was going to come out to receive the petition and the demonstrators were determined to stay until someone did.

One of the police present got on the phone to Government House and said that with the Governor General being absent it was important that someone was there to receive the petition on his behalf.

Shortly after that phone call the electronic gates quietly swing open and a pale figure, apparently a diplomat came out, was welcomed and received the petition.

This was followed by a short period of silence.

It is clear that nothing would have happened had it not been for the intervention of the police making it happen.

Right from the start there was a commitment to peaceful, non-violent protest (with an invocation of Parihaka from one of the young speakers).

One of the organisers of the rally asked those present to be watchful for anyone in the crowd acting as a provocateur, and to photograph them so they could be identified.

In the event the rally was a very peaceful, but powerful, dignified affair.

The demonstrators were heartened by the reponse from passing motorists with lots of toots.

This ceremony was followed by a hikoi (march) across the city to the grounds of Parliament, where actors staged a mock auction of New Zealand assets to rapacious corporate bidders.

Nearly 1000 people showed up at Cathedral Square around 2pm. "If the TPPA treaty is implemented then a substantial portion of our democracy will be dead," It's Our Future Christchurch's Charles Drace said.
'Democracy' arrived in a hearse and was put in the ground by the Prime Minister. 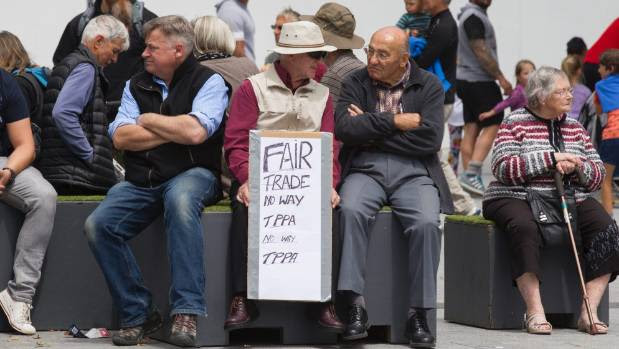 KIRK HARGREAVES
Michael Malloch (left) and Earle Pilcher discuss the ins and outs of the TPPA.
It's Our Future Christchurch resurrected 'Democracy' accompanied by Salmonella Dubs' new song, Jonkey's.
Following analysis by experts of the TPPA treaty text, Drace's organisation believed it was clear New Zealand's rights to make its own laws and regulations would be restricted by overseas corporations.
Revellers at the rally spoke out against the trade agreement, which will be signed in Auckland on February 4. 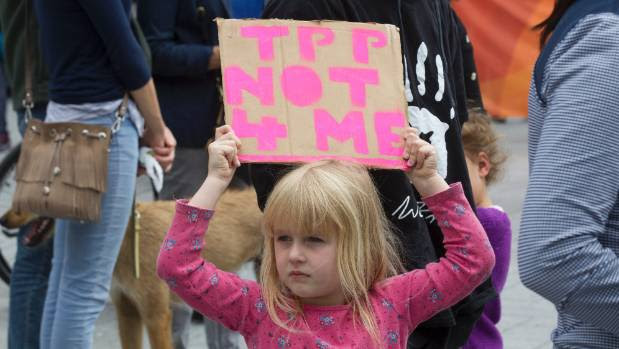 KIRK HARGREAVES
People from all walks of life attended the anti-TPPA protest in Cathedral Square on Saturday.

Veteran protester John Minto stood quietly near the back of the rally.
For him the deal provoked emotions of "anger".
"I think it's dreadful. It's a Bill of Rights for the US corps to come in and plunder. 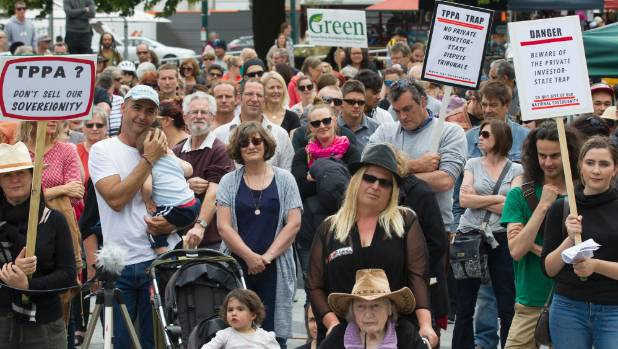 "The real problem with free trade agreements is that, while we all agree New Zealand is a trading nation, if you have open free trade what happens is that our manufacturing sector in New Zealand get gutted.
"If we are going to build up a strong, diversified manufacturing sector and a strong economy with well-paid jobs the only way we do that is through tariffs.
"Every other country that's developed a strong economy, the US, Japan, UK, Germany, they've all done that by putting tariffs to stop cheap products coming in and undermining their own industries," Minto said.
Protester Feroze Brailsford conceded there were some "fantastic parts" of the agreement, but on balance "it's not good for New Zealand".
Michael Malloch did not agree with the way the deal had been struck, believing it was undemocratic.
"I also think that it will not help fair trade.
"It will put the power into the hands of a few corporates. We've got to keep to democracy," he said.
Vic Mackay was "here for the big picture".
"For our freedom and for our kids."
She disliked the secrecy of the deal, saying New Zealand lived "in a time of transparency".
"I get the feeling everyone's a little bit complacent and 'she'll be right' ... Maybe that's a perfect time to bring something like this in," Mackay said.
The last major TPPA rally in Christchurch, held in August, attracted 3500 people, Drace said.
He and a fellow organiser estimated about 1000 had turned up to Saturday's rally.
Other anti-TPPA events in Christchurch on Saturday include a car enthusiasts' cruise, which the organiser Corey Nicholls says could include 200-300 vehicles.
Police on Thursday said they would be keeping an eye on the cruise, which the organisers say is not a boy racer meet, and taking enforcement action if necessary.

Hundreds of people gathered in front of the Governor-General's residence in Wellington today to present a petition asking him not to sign off on the Trans-Pacific Partnership.
It was one of numerous anti-TPP protests around the country leading up to the official signing of the controversial trade pact at SkyCity in Auckland on 4 February.
Organiser Greg Rzesniowiecki said people from various industries held placards at the entrance to Government House making statements such as "Support local, not global" and "Protect our freedoms".
He said the Governor-General's secretary, Gregory Baughen, accepted the petition, which was signed by more than 4500 people.
It was a moving handover, Mr Rzesniowiecki said. Youngsters hongied Mr Baughen as they passed over the petition, while a member of the crowd read out its contents.
The group were to finish their protest with a "Great New Zealand Sell-off" display outside Parliament.
Anti-TPP protests were also to be held in Rotorua, New Plymouth, Nelson, Christchurch and Dunedin today.
In Dunedin's Octagon, about 250 protesters declared the area a TPP-free zone.
Organiser Jen Olsen said Dunedin should follow suit and become the first city to declare itself TPP-free. 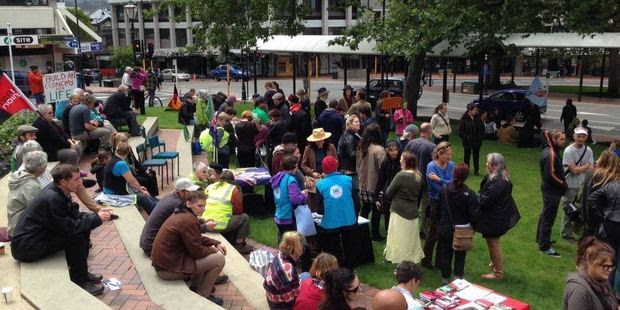 Up to 250 people have declared Dunedin's Octagon a TPP-free zone. Photo / Linda Robertson
The Octagon decision followed a move by the Waiheke Local Board in Auckland on Thursday to vote for the island and the Hauraki Gulf to become such a zone. The Octagon crowd heard from Labour MPs David Clark and Clare Curran, the first time the pair have spoken publicly since Labour declared itself opposed to the trade pact after years of uncertainty over where it stood.
Dr Clark said it had been a "hell of a ride" since he took on the trade portfolio last month.
The party had taken a "principled stance, not a populist stance" to the TPP, which breached New Zealand's sovereignty, he said.
New Zealand relied on trade, but not at any price.
Green Party co-leader Metiria Turei received the warmest response from the crowd, especially when she declared that the TPP would bring down the National Government.
She said she had been heartened by the anti-TPP speaking tour featuring United States trade expert Lori Wallach, who has been telling crowds in New Zealand about the lack of support for the trade deal on both sides of the political divide in the United States.
Anti-TPP demonstrations are expected to continue tonight, with car enthusiasts planning airport-to-CBD protest convoys in Whangarei, Auckland, Hamilton, Tauranga, Palmerston North, Wellington and Christchurch from 10pm. 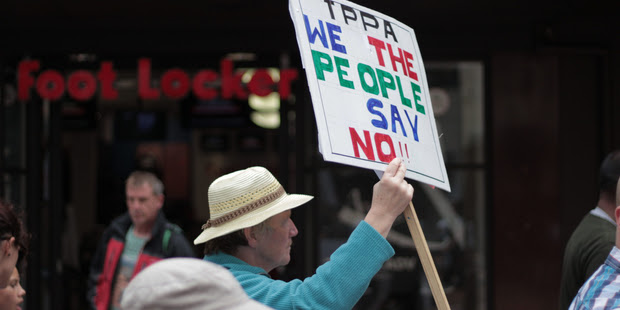 Anti-TPP protests are also being held in other parts of the country. Photo / Callum Osborne
In the Super City, councillor Cameron Brewer says the council has told its staff to stay away from the office and instead work from home on Thursday because of the likelihood of major protests at SkyCity, next door to the council headquarters.
"Council meetings have been cancelled and councillors are being sent 25km south to the Manukau Civic Centre that day," Mr Brewer said.
"I thought we resolved this is a pro-TPP council, after October's debate failed to get the numbers against it. I'm surprised ratepayers are now being asked to fund us and many staff to relocate for the day. We should be staying put, not running away. How pathetic is that.
"Rest assured council's overly dramatic relocation for the day will cost hundreds of thousands of ratepayers' dollars and won't make one bit of difference. The protesters are not after us, so why are we fleeing?
"Let's stay put and show some resolve. Thankfully council management were not advising the royal family during the London Blitz, otherwise they would've been the first to bail to Scotland. Keep calm and carry on, I say."
In a statement, council chief operating officer Dean Kimpton said: "We view this day as a normal work day for staff. However, with more than 3000 people working in the CBD, we want to help ensure minimal disruption to working on this day and use our mobile workforce and workplace strategy to help ease pressure on transport systems, car parking and pedestrian routes.
"As a result, an annual plan [budget] workshop involving a number of councillors and staff has been moved from the central city to the Manukau Civic Building," he said.
An Auckland Council spokeswoman said CBD-based staff had been advised that they might want to consider working at another location or from home on Thursday, which most have the ability to do.
"We would still expect some staff to come into their normal place of work if that's what they choose to do. We are, however, proposing to close the access to the car park on that day given activities around Federal St [SkyCity], which will affect visitors to the building, deliveries and some staff movement."
Cabinet minister Nikki Kaye's electorate office in the central Auckland suburb of Freemans Bay has been tagged in a protest against the trade pact.
Graffiti declaring, "NO TPP yes I voted", has been spray-painted onto the front of the building. 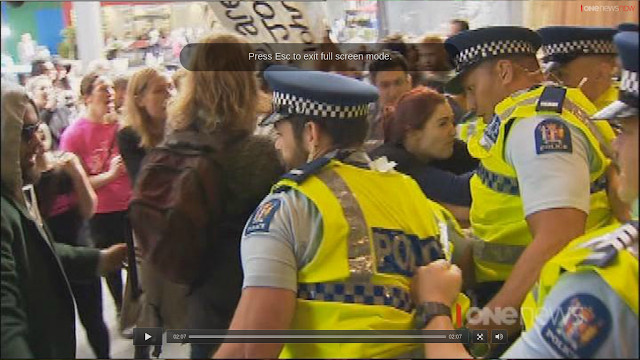 Police have been accused of ramping up tensions after officers called and visited activists today.