Human-Made Fires Pollute Air with Ozone Half a World Away

Fires in Africa and Southeast Asia contributed to western Pacific pollution, a study finds. Prior understanding attributed hefty levels of the harmful agent and greenhouse gas to natural processes. 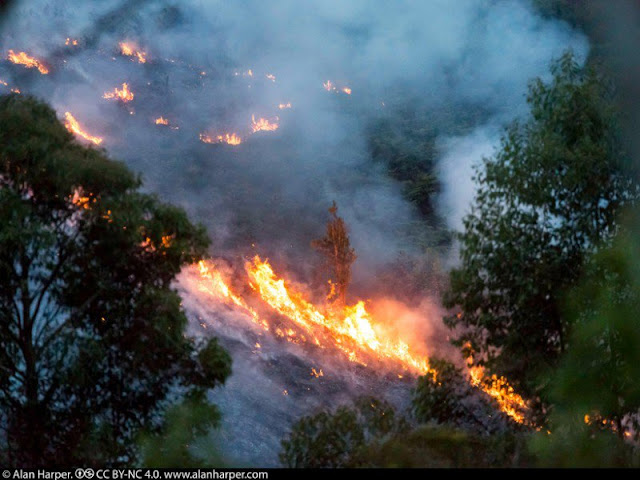 Ozone, a common air pollutant and greenhouse gas, harms lungs and plants and has contributed almost as much as methane to global warming since the start of the Industrial Revolution. Now researchers are reporting new evidence that local-scale slash and burn farming techniques, cooking fires, and wildfires can distribute large quantities of ozone across huge distances within the vast tropical belt that girds Earth. Ozone originating within this belt has the potential to harm health and the environment on the other side of the planet and to help drive climate warming that affects the entire world.
A recent study in Nature Communications found that ozone produced mostly by human-caused fires in Africa and Southeast Asia traveled throughout the lower atmosphere all the way to the western Pacific. According to the researchers, the study’s findings suggest that legislation and other efforts to limit ozone’s effects by targeting industry, vehicles, and other fossil-fuel-burning sources of the gas—mainly outside the tropics— may do little to address these important challenges.
“What’s unique with our study is that we’re in the tropical western Pacific, almost as remote as you can get in the Northern Hemisphere, and we’re still seeing large effects from fires in Africa,” said lead author Daniel Anderson, a graduate student in atmospheric and ocean sciences at the University of Maryland in College Park.
Whenever fires burn once-living organic material, such as wood or fossil fuels, they emit ozone into the atmosphere. Globally, fires contribute up to 10% of the ozone in the lower atmosphere, Anderson said. In the tropics, fire’s effect is magnified, he added, because weather patterns make it difficult for smoke created in the tropics to escape its roughly 15°N and 15°S latitude bounds.
Since the early 1990s, atmospheric scientists have known that fires produce ozone and have been aware of curiously high ozone levels over the sparsely populated, mostly nonindustrial western Pacific region, according to Anderson. However, researchers have mostly attributed the ozone abundance in the Pacific region’s lower atmosphere to a natural process of upper atmosphere ozone falling to lower altitudes. Also, prior studies that sought to link the pollution to fires found only partial evidence of the relation.
To track western Pacific ozone back to its sources, Anderson and his colleagues collected air samples in renovated Gulfstream 5 jets in January and February of 2014. Instead of seats, these planes housed scientific instruments that sucked air in from outside the plane. The scientists could analyze the samples on the spot or store them in sealed cans for later analysis.
Their investigation found a mixture of chemicals that could have been produced by fires or fossil fuel burning in their samples, but the presence of two telltale compounds—hydrogen cyanide and acetonitrile, which are produced almost exclusively by fires—indicated that the pollution came from fires, Anderson explained. “When you have all of those species together at one time in high amounts, then it’s a very good sign that it’s coming from fires because nothing else really makes them.”
Using the National Oceanographic and Atmospheric Administration’s Hybrid Single-Particle Lagrangian Integrated Trajectory (HYSPLIT) model, which is composed of meteorological data from all over the world, the researchers next retraced the pollutants to their geographic origins. The model enabled Anderson and his team to calculate where packets of air traveled during the previous 10 days, revealing that fires in Africa and Southeast Asia contaminated the air that migrated to the western Pacific.
The new study makes it harder to argue against biomass burning as the source of the ozone pollution, said Matthew Alvarado, a senior scientist at Atmospheric and Environmental Research Inc., headquartered in Lexington, Mass., who was not involved in the work. He cited the “weight of evidence” the new research has brought to bear on the question.
Anderson noted that people in sub-Saharan Africa and Southeast Asia rely on slash and burn farming and igniting cooking fires as essential parts of daily life. Prohibiting those practices would be like “telling Americans you aren’t allowed to drive cars,” so suitable alternatives are needed to address this ozone problem.
—Cody Sullivan, Writer Intern
Citation: Sullivan, C. (2016), Human-made fires pollute air with ozone half a world away, Eos, 97,doi:10.1029/2016EO044743. Published on 27 January 2016.