The Ukrainian economy in tatters

The War Breaks The Spine of Ukraine's Economy
Ukraine was already limping along, but the Russia-backed separatist rebellion in the east has crippled its economy 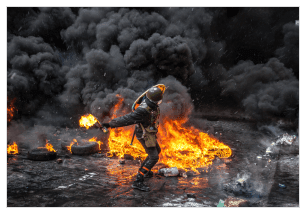 Maxim Eristavi is an independent writer based in Kyiv. He's been covering the 2014 Ukrainian revolution since the very first day and previously worked as CEO of Ukraine's first international news-radio station, Voice of the Capital, and as a journalist at Radio Free Europe/Radio Liberty.

What you need to know:

* Ukraine's hryvnia is in freefall, now the second-worst performing currency in the world
* Ukrainian economy is in the middle of a two year-long recession that is expected to deepen later this year
* Ukraine was already limping along, but the Russia-backed separatist rebellion in the east has crippled its economy. The country struggles to afford paying its war bills

In Kyiv, barely a day passes by without hearing of someone being laid off or getting their paycheck cut. Usual traffic jams have almost vanished, and on Saturday nights bars and restaurants are half-empty.

It's easy to spot the frustration of locals as they pass by currency exchange offices: the hryvnia is in free fall, having plunged to record 40 percent against the U.S. dollar this year. It's now the second-worst performing currency in the world-even than the Syrian pound is doing better.

Over the past half-year, Ukraine has gone through a bloody revolution, lost a chunk of its territory to Russia, and is now in the midst of its worst military conflict since the World War II. Funds have all but run out; the Ukrainian economy is collapsing under the weight of the war, and patriotism won't be enough to blunt the recession's impact.

"There are two news stories in today's world economy. First: Argentina announced a default, second - Ukraine didn't. And will never announce it", Ukrainian prime-minister Arseniy Yatsenyuk triumphantly boasted on July 31st after the parliament cleared the way for another $1.4 billion installment of an International Monetary Fund loan.

In fact, when it comes to parallels between Ukraine and Argentina, economic data does not back up the government's optimism. True, both countries have seen three recessions in the past five years, and both are caught in a prolonged and dangerous inflation spiral. But this year Ukraine's GDP will fall 7 percent, prices will rise almost 20 percent, the local government and the IMF predict. Ukrainian economy shrank even further in the second quarter of 2014, new data shows. The recession has been ongoing for over two years, but this year's political crisis has severely worsened the country's economic woes. Ukraine was already limping along, but the separatist rebellion in the east has crippled its economy.

Earlier this year, the International Monetary Fund, backed by other financial institutions and foreign governments, threw Ukraine a $27 billion lifeline to avert a default. It is Ukraine's third aid package since 2008, and IMF chief Christine Lagarde suggested that Ukraine may need even more aid this year.

Exchange rates in Kyiv on August 13, 2014. Ukrainian hryvnia sinks to record lows against US dollar

On the world's financial markets, Ukrainian bonds are already junk-rated. They returned just 0.2 percent in July, one of the worst performances in all of eastern Europe-but not worse than Russian bonds. Now, analysts warn that the Ukrainian economic mess has clouded the outlook for all of Europe, right at the time when Eurozone recovery was finally speeding up.

Among ordinary Ukrainians, the impact of the downturn is acutely felt. Many put their businesses and careers on hold in order to help the Maidan revolution, but after that job was done, there was still no relief.

"Everyday I ask myself when is this crisis going to end? Months have passed, but I still cannot even make a wildest bet," Olga Ivanova, an owner of local event-agency, told me. One of the youngest leaders in this industry, she opened her first business a couple of years ago. Things were going well for her, until suddenly the market collapsed at the end of 2013 with the start of the revolution. "For months I was hoping for quick recovery right after the revolution. But then the war came and now I simply cannot afford to wait any longer," Ivanova says. She has had to merge her small company with a struggling competitor so that both can have a chance to survive.

Despite increasing economic pressure, many Ukrainians continue to donate as much as they can to support the Ukrainian army in its fight against pro-Russia rebels in the East. The government is scrambling to pay the bills for the war, so the army's poorly equipped soldiers depend on these donations.

On July 31, in a last-minute vote, Ukraine's parliament authorized an additional $743 million for the army, which otherwise would be left without a cent starting August 1. Lawmakers decided to finance these military expenditures with additional tax hikes, including a mandatory "war-tax" of 1.5 percent for all Ukrainians.

"If the Ukraine army enters our city, this will be the next Stalingrad"

That won't come close to covering all of the war's costs, however. To repair the war devastation in Eastern Ukraine, the country needs at least $600 million, according to the Finance Ministry. Kyiv has, at most, half of that, and the fierce fighting in the region continues.

Still, newly-elected president Petro Poroshenko and his government promise billions of dollars in pending foreign investments as soon as the war is over. Ukraine remains one of the hardest places in the world to do business, and crucial anti-corruption reforms have stalled. Prime Minister Arseniy Yatsenyuk's recent attempt to resign following tensions within parliament just highlights the political turbulence that Ukraine still cannot overcome. Parliamentary elections, scheduled for this October, will only lead to more political and economic uncertainty.

So after a popular uprising full of hopes and dreams for a better future, the deepening economic crisis has been a cold shower for Ukrainians. Literally.

Vitali Klitschko, the newly elected Kyiv mayor, announced on August 4 that he will cut off all hot water for the Ukrainian capital, at least through the end of September. This move, supported by municipalities all around the country, is supposed to save energy so Ukraine can survive the upcoming winter without depending on Russian gas. Without hot water, millions of low-income Ukrainians will suffer; the country still relies heavily on a Soviet system of energy-inefficient centralized heating.

Vitali Klitschko, the newly elected Kyiv mayor, announces on August 4 that he will cut off all hot water for the Ukrainian capital


The growing gas shortage could be the last red line for the Ukrainian economy. As major Ukrainian industries are also rolling out emergency plans to save on gas consumption and heating costs, analysts cannot imagine this happening without additional and significant output cuts. This will force Ukrainian economy in another deep dive, the one it have no strength to survive.
Posted by seemorerocks at 06:42