Bill English battles for his job at Queenstown debate 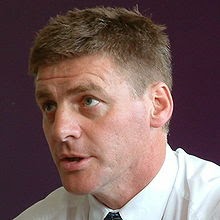 There was a full house in Queenstown last night for the ASB Great Debate as Finance Minister Bill English faced off against four men who want his job.

During the sometimes feisty debate some of the nation's top political leaders tackled big issues such as economics and social policy.

Mr English confirmed he will release details of tax cuts before the election, though he said they would be modest.

The Queenstown meeting was lively, even rowdy as English had to face pesistent questioning about “Dirty Politics' and about the secret TPP negotiations.

To say that English was uncomfortable and faltered, seems to me to be an understatement


English was interviewed about tax cuts and about contradictions between statements between himself and the PM.

He sounds uncomfortable and shifty to me and is obfusicates.

An establishment economist interviewed opined that there is currently no place for tax cuts.

Finance Minister Bill English has given his strongest indication yet about the level of any cuts should National be returned to government.

At a debate for the various party finance spokespeople in Queenstown last night, Mr English was also asked to defend his party's integrity in the light of the Dirty Politics allegations. 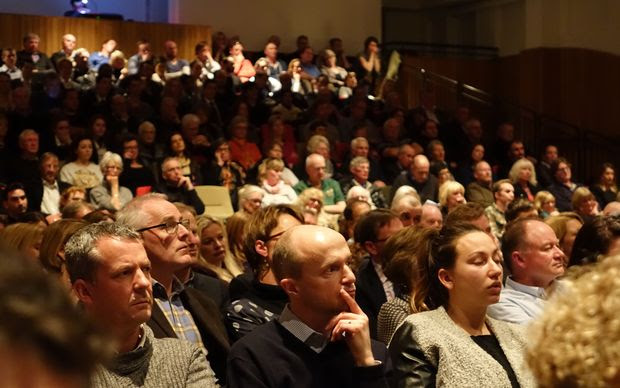 Mr English and spokespeople from the major political parties fronted up for the debate but New Zealand First's Winston Peters refused to show because Colin Craig from the Conservatives was there.

Mr English hinted that any tax cuts under National would not be large, and middle- and lower- income workers might expect to benefit.

"We'll look at moderate tax cuts for low and middle income earners and the amount of money available for that is likely to be relatively small. So if people are expecting some kind of package that says you'll get twenty bucks a week, we're not going to be announcing anything like that before the election."

The audience wanted to hear Mr English account for allegations made in the Dirty Politics book about National Party staff accessing the Labour Party computer system and removing private data.

Mr English said he did not condone that sort of behaviour.

Green Party co-leader Russell Norman launched an attack about the Trans-Pacific Partnership negotiations, suggesting the talks were secret because New Zealanders will hate what is in it and that it will undermine the country's democracy.

Asked whether the government should release the position held by New Zealand in the talks, Mr English told the audience the government could not release those details while negotiations were underway.

David Parker called Mr English irresponsible because of his position on superannuation. Mr Parker said paying retirees will cost the country more than the education and social welfare budgets in 30 years time.

But Mr English said he was comfortable with the numbers and the Prime Minister's stance at the previous election that he would rather resign than put up the retirement age.

He said that position remained going into this election, and the only way the National Party's view on superannuation would change was if there was a change in the leadership.

He said National would not be stating specific plans for tax cuts before the election, but the broad parameters of its future plans would be announced.