We are quickly approaching the point of no return as the US pincer movement on Russia draws closer to war.

Peter Lavelle has been a voice of reason and has been when necessary a critic of Russia. The neo-cons in Washington have crossed the rubicon and this latest move on Russia pushes us ever more close to war.

In this link from Democracy Now! featuring Johnathon Steele from The Guardian he discusses the very same concerns Peter Lavelle sums up in his obviously very concerned status update below.

Robin Westenra and i have been predicting this as was Michael C. Ruppert before his untimely demise. Hold on it will be a very bumpy ride and we may well yet get to see Nuclear Weapons used in anger.

Let's all be clear and transparent. If and when the Kiev regime requests and is granted NATO membership, then the entire post-WWII and OSCE regime comes to an end. This will be the west's formal declaration of war against Russia. Neoconland have be planning this moment for 2 decades. Fine. The west proves time and again it has no values when it suits its selfish geopolitical purposes.

The United States and NATO are openly accusing Russia of sending combat forces into Ukraine as tensions continue to mount.

According to the United Nations, nearly 2,600 people have been killed in eastern Ukraine since April in fighting between Ukrainian forces and separatist rebels sympathetic to Russia.

On Thursday, at least 15 civilians were killed when Ukrainian forces shelled the rebel-held city of Donetsk.

On Thursday, NATO released satellite images that it says show Russian artillery, vehicles and troops in and around eastern Ukraine.

We are joined from London by the Guardian’s Jonathan Steele, the organization’s former Moscow correspondent and author of many books, including "Eternal Russia: Yeltsin, Gorbachev, and the Mirage of Democracy."


NATO planning rapid-deployment force of 10,000 troops to counter Russia – report
NATO is reportedly working towards the creation of an expeditionary force composed of 10,000 troops from seven different member states as a result of escalating tensions with Russia over the conflict in Ukraine. 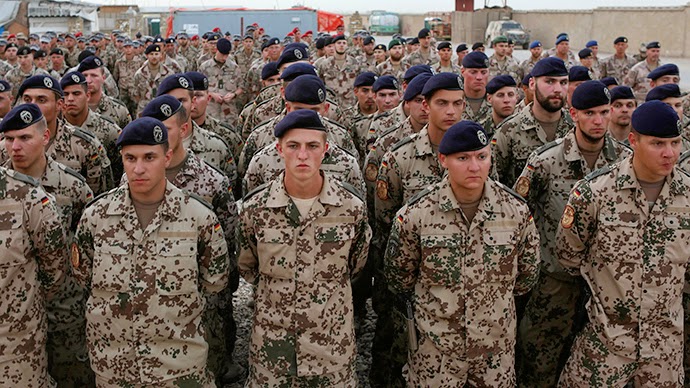 According to the Financial Times, the force’s creation will be spearheaded by Britain and involve contributions from Denmark, Latvia, Estonia, Lithuania, Norway, and the Netherlands. Canada is also interested in joining the group, but it’s not known what its final decision will be.

Although no formal announcement has been made, British Prime Minister David Cameron is expected to declare its formation at the upcoming NATO summit in Wales on September 4th.

Many specifics have yet to be worked out or announced, but planners are reportedly implementing ways to increase the number of soldiers involved even more if necessary. Air and naval units will be integrated into the group, as well as ground troops led by British commanders.

As noted by the Times, the creation of the force comes as a response to Russia’s involvement in the ongoing Ukrainian crisis, with the ultimate goal being to “create a fully functioning, division-sized force for rapid deployment and regular, frequent exercises.” NATO has accused Russia of deploying more than 1,000 troops into Ukraine to bolster separatists in the eastern part of the country.

Russia, however, insists that it does not have troops operating inside of Ukraine and has dismissed NATO’s assertions.

Despite the fact that NATO has opted not to act militarily in Ukraine – unnamed sources told Foreign Policy on Friday that there are no plans to confront Russia with anything more than stronger sanctions – Jonathan Eyal of the London-based Royal United Services Institute said the group needs to demonstrate that its eastern European members are just as integral to the alliance as other states.

“We need to end the idea of different zones of security in Europe,” he told the Financial Times. “We need to be talking about prepositioning, regular rotation of troops and making it very clear that we do not accept that the eastern Europeans are in some different category of membership of NATO.”

For his part, Russia’s envoy to NATO, Aleksandr Grushko, said any attempt to push stretch further into the region would impact Moscow’s own security planning.

Earlier on Friday, Ukrainian PM Arseniy Yatsenyuk said that his government would seek the cancellation of Ukraine's non-aligned status and resumption of the country's course for NATO membership 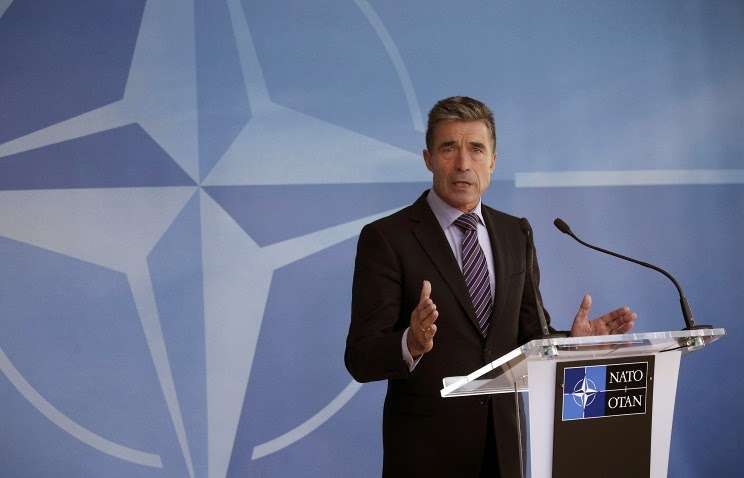 He also said that some NATO member-states "announced concrete financial contributions to these trust funds and it was signalled that more announcements may come forward at the summit in Wales next week."

"The whole purpose of these trust funds is to finance activities that can assist Ukraine in reforming and modernizing the armed forces with a view to making them stronger to defend Ukraine," Rasmussen said.

Earlier on Friday, Ukrainian Prime Minister Arseniy Yatsenyuk said that his government would seek the cancellation of Ukraine's non-aligned status and resumption of the country's course for NATO membership.

Rasmussen also accused Russia of being involved in the Ukrainian conflict.


Accusations against Russia of invading Ukraine are voiced repeatedly, but nobody has presented facts, Russian Foreign Minister Sergei Lavrov said on Friday after the meeting with his Iranian counterpart Mohammad Javad Zarif.

“It is not the first time when accusations addressed to us are heard. Since the beginning of the crisis, we have been accused, that we are to blame for everything".

“No facts have been presented to us either about ‘invasion’ or other issues,” Lavrov said. “It seems to me that concealing of facts is characteristic of the United States and some European countries over what is happening in Ukraine.”

There is not even one fact to confirm all the statements, the Russian minister said, adding that on every occasion the Russian side asked American and Western European colleagues to substantiate such accusations