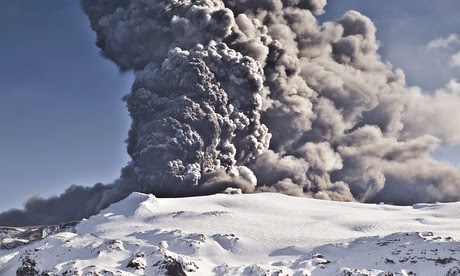 A small volcanic eruption has occurred under Iceland's Dyngjujökull glacier, prompting authorities to raise the warning code for aviation to red, the highest level, Iceland's meteorological office has said.


The region of the Bárðarbunga volcano, in the centre of the island nation, has already been evacuated due to days of heightened seismic activity there.


"It is believed that a small subglacial lava-eruption has begun under the Dyngjujökull glacier," the Icelandic met office said. "The aviation colour code for the Bárðarbunga volcano has been changed from orange to red."


The red alert is the highest warning on the country's five-point scale and indicates an eruption is imminent or underway with a significant emission of ash likely. The colour codes are intended to inform the aviation sector about a volcano's status.


"There has been intense earthquake activity at the volcano. We cannot exclude that this could be a big eruption," met office scientist Kristín Jónsdóttir said.


Ash from the eruption of Iceland's Eyjafjallajökull volcano in 2010 shut down much of Europe's airspace for six days, affecting more than 10 million people and costing $1.7bn.


Brussels-based aviation authority Eurocontrol said that as soon as the volcano had erupted, the Volcanic Ash Advisory Centre in London would produce a regular forecast about the levels of volcanic ash in the atmosphere.


Based on this forecast, civil aviation authorities may issue a notice but it was the responsibility of individual airlines whether they would operate and how they would adapt their flight schedules, Eurocontrol said.


There have been thousands of small earthquakes over the past week at Bárðarbunga, Iceland's largest volcanic system, located under the ice cap of a glacier but in a different range to Eyjafjallajökull.


The meteorological office said an Icelandic coast guard airplane was flying over the area with staff from the office and the civil protection agency. Data from the equipment on board the plane was expected later Saturday, it added.

"Data from radars and web-cameras is being received, showing no signs of changes at the surface," it said.
Posted by seemorerocks at 12:15