A MUST-READ article on dirty politics in New Zealand 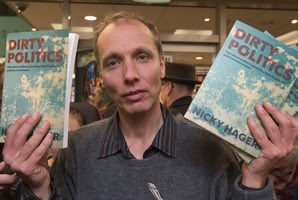 
The Dirty Politics saga cuts to the heart of political life in New Zealand. Over the past 10 years there has been an insidious shift in the way that government works, with increasingly autocratic, arrogant ministers taking away the levers of power from citizens and civil servants.

The independence of the civil service has been eroded, with ministers routinely interfering in operational decisions. Last year, the Law Society felt impelled to report to the United Nations that Parliament had been used to pass a succession of acts that strip away rights, freedoms and protections from citizens, in breach of the Bill of Rights. Ministerial accountability has become a farce.

It is this steady erosion of democratic checks and balances in New Zealand that makes politicians feel above the law and contemptuous of those they represent. As the old adage goes, power corrupts, and absolute power corrupts absolutely.


If many Kiwis feel disgusted with politics and politicians, and powerless at present, they have good reason.

If the Prime Minister's office has indeed worked with the SIS to attack the Leader of the Opposition, or colluded with a muck-raking blogger to vilify people who disagree with the ruling party, this is reprehensible, and a constitutional disgrace. It is the kind of governance that makes Kiwis feel terrible about their own country. It's not okay.

Unless executive power can be reined in, however, we can expect a succession and perhaps an acceleration of such abuses, no matter who is in power.

What's needed is a truly independent and high-level inquiry (perhaps a royal commission) to investigate the internal workings of government in New Zealand, and recommend a form of governance that has integrity, is truly democratic, and fit for the 21st century.

An election is one time when politicians are forced to listen to ordinary people. Kiwis from across the political spectrum have the chance to demand a much higher standard of conduct and decision-making from their elected representatives.

We have the right to live in a democracy where our leaders do not lie to us, or abuse their powers, or strip away our freedoms. They need to represent what's best, not what's worst about New Zealand. We are entitled to feel proud and confident about the way we're governed, not embarrassed and ashamed.

There are decent people in all political parties. They must take urgent steps to clean up politics in New Zealand, and to restore democratic checks and balances to the political process. It must adversely affect the lives of politicians, and make them wonder what happened to their own ideals, and how they became complicit in such a dirty game.