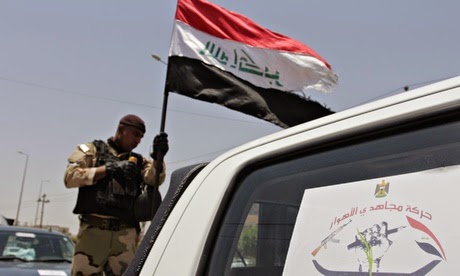 18th Aug: Yazidi volunteers are being trained by the Kurds to fight Daash. The Kurds are providing the Yazidis with arms, training, and uniforms.

22nd Aug: An attack on the Sunni Musab bin Omair mosque in Diyala during Friday prayers has left 68 worshippers dead. Locals are blaming Shia militias for the attack. They state that the attack followed the deaths of Shia militiamen in an IED attack and that this was a reprisal attack.

Government sources are claiming that the attack was either by Daash or some other militant group. They have called an enquiry and have stated that they will not flinch from prosecuting the guilty no matter who they are.

There were conflicting reports that the attack involved the use of a suicide bomber who blew himself up prior to the shooting.

22nd Aug: Abu Musa, spokesperson for Daash, is killed in Syria during an assault on the Taqba military base:
http://rt.com/usa/182256-is-spokesman-mosa-killed/

22nd Aug: The Iraqi National Alliance says that it will not compromise on the Ministries of Defense and Foreign Affairs.

23rd Aug: Musab Al Sinjeri a Daash commander in Diyal is killed along with his assistant Khalid al Dulaimi by the Iraqi Security Forces.

23rd Aug: Three people are killed and nine injured in a suicide bomb attack on the headquarters of the Intelligence Services in Baghdad.

23rd Aug: The Speaker of Iraq’s parliament, Salim al-Jubouri , and Iraq’s deputy Prime Minister, Saleh al-Mutlaq, suspend their participation in Iraq’s government over the Musab bin Omair Mosque attack, until there is a proper investigation.
Jubouri later states that efforts are under way to investigate those responsible and that militant groups claiming to be part of the Armed Forces and carrying out Sectarian or Criminal acts will be punished.

The Speaker also stated today that Shia parliamentarians are pressing for Central rule in Iraq, while Sunnis want more power to be devolved to the provinces.

23rd Aug: Singing different tunes: Kerry asks Iraqi Political Blocs not to set pre conditions to government formation. While Biden suggests that Iraq needs a Federal structure similar to that of the US, and one that the US is willing to help Iraq establish.

23rd Aug: Yazidi volunteer fighters ambush a three vehicle convoy of Daash near Sinjar Mountain and kill the occupants of all three vehicles they destroyed. The Yazidis also recovered arms and ammunition from the vehicles.

Ambushes and retaliatory attacks by Yazidi fighters are forcing Daash to carry out most of its activities after dark.

23rd Aug: A car carrying Baghdad number plates is attacked with a “sticky” bomb in Iraq. Three people were wounded in the attack.

24th Aug: Marthoya Afkham, spokesperson for the Iranian Foreign Ministry states that there are no Iranian troops in Iraq and that Iran has no plans on sending any.

24th Aug: The US carries out airstrikes on Daash positions east of Mosul and kills one.
Another 8 Daash fighters are killed by US airstrikes in Mosul
Meanwhile, the Iraqi Air Force carries out air strikes over the weekend

24th Aug: A car bomb targets a Shia area of Baghdad on Sunday killing 3 and wounding 15

24th Aug: Iraqi Forces repel an assault on the Baiji refinery north of Tikrit. The Iraqi Air Force attacks assaulting militants and bombs one of the buildings in which they took shelter.

The Iraqi forces claimed to have destroyed 4 tanks and 6 vehicles being used in the assault.

24th Aug: Shia cleric Qais Al Khazali, head of the Shia militia League of the Righteous, condemns the attack on the Musaib bin Omair mosque and calls for the perpetrators of the attack to be brought to justice.

The League of the Righteous (Asai’b Ahlal al Haq) has been accused of sectarian killings in the past and continues to be suspected of indulging in sectarian warfare.

25th Aug: Daash buries 40 of its fighters in northern Tikrit

Fuad Masum, the Presiddent of Iraq, has asked Javed Zarif to involve Iran in the conference on Iraq to be held soon.

He will also visit the Imam Ali (as) shrine and travel to Iraqi Kurdistan on Wednesday.

25th Aug: Qassim al Fadawi, former governor of Anbar, states that man primary responsible for the attack on the Sunni Musab bin Omair mosque in Diyala, which resulted in a large number of fatalities, has been arrested. Preliminary investigations show that the act was not a sectarian act but a criminal one. This would indicate that it was meant to incite sectarian killings.

25th Aug: Reigning in the militias: Prime Minister in waiting, Haider al Abadi states, “I confirm that weapons must remain in the hand of the state -- there is no place for any armed group.”

25th Aug: Daash gets paid in kind: A car bomb, the first of its kind in Mosul, goes off outside one of the Daash headquarters in New Mosul, Mosul. The number of casualties is reported to be high but unverified.

25th Aug: Two bombs explode in the Shia city of Karbala in south Iraq, one at a transportation hub, and leave many dead and injured.

25th Aug: Ten Shia worshippers are killed and 25 injured in Baghdad when a suicide bomber blew himself up inside a Shia Hussanieh in Baghdad.
(http://en.wikipedia.org/wiki/Hussainia)

25th Aug: The Sunni political bloc, Iraqi Forces Alliances, has presented an 18 page list to Haider Al Abadi for pre approval prior to them lending him support.
The demands include, but are not limited to:

The Sunnis see any steps being taken by Haider Al Abadi to form government in an ad hoc fashion to be similar to the way in which Maliki functioned and unacceptable.

25th Aug: The National Alliance has stated that it will name its new President after the formation of the Iraqi Government headed by Haider al Abadi

25th Aug: Kurdish authorities are prosecuting three high ranking officials who were in charge of security forces/arrangements when Sinjar fell. The three are:

25th Aug: Massoud Barzani refuses to sign into law an amendment that would allow for democratic protests in Iraqi Kurdistan. He cited the danger posed by Daash as sufficient to necessitate this suspension of civil liberties.

25th Aug: The Parliament of Iraqi Kurdistan holds a special session to deliberate on the Peshmerga/Kurdish forces fighting Daash in the north.

25th Aug: Asaad al-Shammari, a Daash terrorist who specialized in planting IEDs has ironically/justly been killed by an IED after Yazidi militia men holed up on mount Sinjar opened fire on him while he was planting a bomb.

25th Aug: The Fight for Jalawla continues, but the tables are now turned: It is now the Peshmerga forces that are laying siege to Jalawla being held by Daash. The Peshmerga forces have seiged the town from three sides and are preparing to invade it. Precautions have been taken to ensure that none of the Daash fighters escapes alive. Ten Peshmergas were killed over the past two days.

Peshmerga forces are being backed by the Iraqi Air Force.

25th Aug: The Egyptian Dar al Ifta launches a campaign to ban the use of the term “Islamic State” and is asking the international community and Muslims to refer to it instead as “QSIS” (Al Qa'ida Separatists in Iraq and Syria).
http://www.egyptindependent.com//news/dar-al-ifta-bans-use-%E2%80%9Cislamic-state%E2%80%9D-term

22nd Aug: Hezbollah condemns the beheading of the American Journalist in Iraq
24th Aug: The Al Nusra front releases Peter Theo Curtis, an American journalist who was kidnapped two years ago. The journalist was released after mediation by, guess who, Qatar.

24th Aug: Advantage Iran: Iran shoots down an Israeli drone attempting to fly over its Natanz nuclear facility. The drone was shot down by the Revolutionary Guards.
http://www.dailystar.com.lb/News/Middle-East/2014/Aug-25/268431-iran-airs-tv-footage-of-purported-israeli-drone.ashx#axzz3BL4OOJFR

24th Aug: Losing the north: The Syrian Government lost its final foothold in the north east of Syria, Taqba Air Base, to Daash. The fourth all out assault by Daash that resulted in 340 Daash casualties and 170 Government troops (numbers stated by the Syrian Observatory of Human Rights) was the deadliest so far.

Government airstrikes had targeted Daash fighters repeatedly but were unable to stop the rebel advance. The Syrian Air Force even used fuel bombs to try and stop the rebels. However, Daash was able to enter the base and Syrian troops then withdrew. There have been reports of beheadings and the Syrian Army and Air Force has lost some air assets and heavy equipment.

24th Aug: Malaysia arrests 19 people suspected of wanting to bomb a local brewery and planning to travel to Syria to fight for Daash:
https://news.vice.com/article/malaysia-arrests-suspected-islamic-state-militant-recruits-amid-fears-of-rising-extremist-support

25th Aug: Fifteen people are reported dead, twelve of them Houthi fighters and three belonging to opposing tribes in Al Jawf. Fighting is ongoing. The Houthis were protesting against discrimination by the government.

25th Aug: Iran announces its intention to supply arms to militants fighting Israel in the West Bank as a response to Israel flying drones over Iran.

25th Aug: First signs of trouble: Turkey sees protests over its large number of Syrian Refugee. The refugees are in a pitiful state with many resorting to begging in the streets.

25th Aug: With a straight face, Walid Muallem, of Syria offers the United States its help in its fight against Daash terrorism. He however warned the United States not to carry out air strikes on “Syrian” territory.

25th Aug: Kurdistan Workers Party (PKK) fighters have kidnapped three Chinese Workers in Eastern Turkey. The three were working on a power station being built by a Chinese Company. The Power plant was also attacked.

Waking up finally: “ISIS has received financing from donors in Kuwait and Qatar. Saudi Arabia funneled weapons to Syrian rebels and didn’t care if they went to ISIS. Turkey allowed ISIS fighters and weapons to flow across porous borders.”
http://www.nytimes.com/2014/08/25/opinion/a-necessary-response-to-isis.html?partner=rssnyt&emc=rss

Smoke and Mirrors, Foley’s execution video may be “staged”:


http://www.telegraph.co.uk/news/worldnews/middleeast/iraq/11054488/Foley-murder-video-may-have-been-staged.html
Posted by seemorerocks at 13:52