A moment of perfect irony 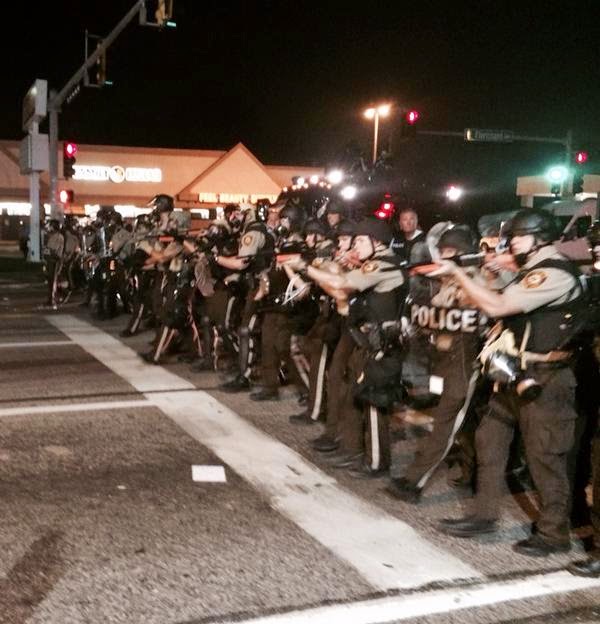 In a moment of perfect irony, Russian MP Sergey Neverov has put out a call for an international intervention in the wake of continuing violence in Ferguson, Missouri. This came after a tweet from MP Aleksei Pushkov, the committee for international relations chair for the State Duma, Russia’s lower house of Parliament, came down strongly against the use of tear gas and rubber bullets

Translated:
USA has used tear gas and rubber bullets to disperse a protest in Ferguson. Is not it a sign of dictatorship and excessive use of force?
As reported by RT, the State Duma, has already begun preparing for such an intervention with Aleksei Pushkov the likely Russian delegate to an international commission set up for addressing the continuing violence in Ferguson.
The envoy for the Russian Foreign Ministry’s envoy for Human Rights, Konstantin Dolgov, posted some particularly harsh criticisms as well.
A teenager was kneeling before policemen with his arms raised and still he was shot six times. It is worth remembering that over 400 people in the US become victims of policemen every year.
The US Department of State should be concerned about the situation in their own country. Instead of trying to calm the people after the killing of a young black man by the police they are deploying the National Guard against their own people. This means that the number of victims can increase. 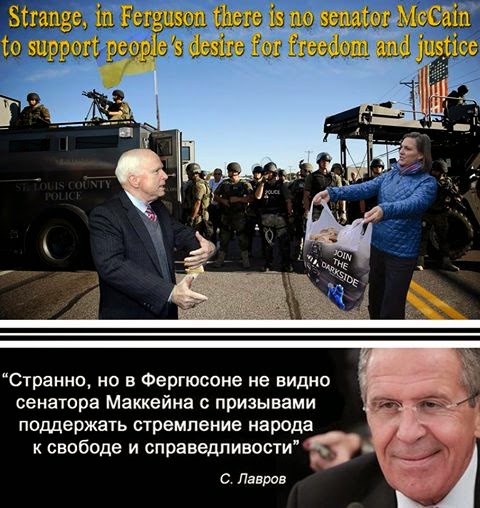 …
While demanding that other countries guarantee the freedom of speech and stop suppressing anti-government protests, at home the US authorities never show any leniency towards those who actively express their discontent with inequality, de-facto discrimination, and the position of second class citizens. As we have all seen, reporters who perform their professional duty also get their share of ill treatment.
To be carefully considered is that the US now has an estimated 6 million domestic terrorists which have been moving to engage in escalating the tensions in the St. Louis suburb. These terrorists have now been labelled as the single largest threat within the US. Using the metric which the US itself established, with the invasions of Iraq and Afghanistan, the Russians now are weighing the need for a peacekeeping mission to Ferguson as well as other US cities to help quell the violence which is threatening to destabilize the nation.
The irony in Russia now using the UN programs which the US pushed to legalize interventions around the world cannot be ignored. In fact, Russia has been engaged in deploying peacekeeping forces now for many years, deploying in partnership with Moldova within the breakaway republic Transnistria to prevent the nations collapse in to civil war.
If Russia does manage to call for such an operation within the US, and it sticks in the UN, we could be looking at a near reversal of fortune for the United States. Our once proud nation having devolved to little more than a police state controlled by an oligarchy. The real irony is how less than a week ago, such an action was contemplated as satire by vox. Now it is becoming all too real. To even further underscore the irony, during a live broadcast, CNN had the crowd behind them calling for help from North Korea. It is highly unlikely that the Democratic People’s Republic of Korea would intervene, but so far there has not been a public statement from the reclusive Asian nation.
And, to further add a level of irony, the US has already pre-approved such an action through the UN resolutions passed in order to authorize action in Afghanistan and Iraq. To prevent a Russian based operation would undermine US operations around the world.
Will this happen? Highly unlikely. But, Russia is at least enjoying the awkward situation which they have now put the United States into.