Lavrov: talks the only way to

find out if eastern regions

want to be part of Ukraine

SELIGER, Russia. Aug 27 (Interfax) - Only talks between the Ukrainian government and eastern Ukrainian regions can make it clear whether the eastern territories are willing to remain part of Ukraine, Russian Foreign Minister Sergei Lavrov argued on Wednesday.

"We are now convinced that everything possible must be done to ensure that they sit down at the negotiating table and start moving from an urgent ceasefire to trying to hear each other. Until they sit down we won't be able to understand whether they will be able to live together or not," Lavrov said at the Seliger 2014 youth forum.

"Unless a political dialogue is launched with the participation of all regions, we will never be able to understand whether it is realistic or unrealistic for the Ukrainians to reach an agreement. And when the current Kyiv authorities say, 'We will start a dialogue but not before Donetsk and Luhansk lay down their arms, and if they don't we'll try to achieve our goals in a military way,' it is an absolutely irresponsible attitude because when one says to people, 'Surrender first, and then we'll see what to do with you,' it sparks a chain reaction," the minister said.

"I'm sure that what has already been achieved in the regions of Luhansk and Donetsk consolidates these regions in their fight for what is most important - for the right to live in those lands the way their fathers and grandfathers did, and live the way they want to live as well, speaking the Russian language, providing their children with education in the Russian language, electing their own governors and legislative assemblies, being able to get the money from taxes on economic activities that are carried out on their territory, being able to maintain economic, cultural and purely human contacts with their relatives and friends in the Russian Federation and other countries. That is the main thing," Lavrov said

does not want spats - Lavrov

Russia’s Foreign Minister Sergey Lavrov said that the West started its “irrational attacks on Russia long before” this spring’s events in Ukraine, but insisted that Moscow is seeking to avoid “spiraling sanctions” with the EU and the US. 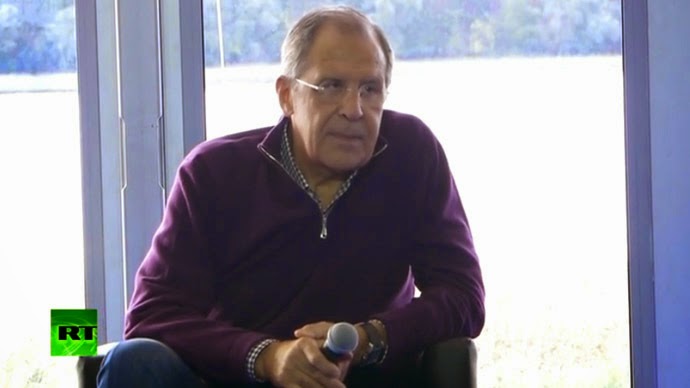 “I can only note that long before events in Ukraine the West’s attacks on Russia assumed an irrational form. It all started long before this spring.”

Lavrov accused Western political leaders of “stirring up” anti-Russian feelings among their electorates, saying that their attitudes towards Russia “require a reevaluation.”

“Political leaders in the West incite public opinion, and then claim it is the people who are forcing them to take anti-Russian measures.”

“I think the reason that Russia is under such heavy pressure is that, more than any other country, we are not afraid to talk about our interests and express our opinions. At the same time, we do not claim that they are the absolute truth, and we are open to listening to others. But we hope to get the same in return, and rely on our independence not being punished by others,” Lavrov said.

Lavrov said the United States and other Western countries were “going against the course of history” by attempting to “artificially” hold on to their influence.

“Some countries are trying to restrain the emergence of an egalitarian international arena. And if more unilateral sanctions are imposed on us to this end, we will take measures in response.”

He also claimed that the West's desire to maintain its status as the ultimate international arbiter was a"roadblock" to solving global problems, such as "terrorism, drug trafficking, spread of weapons of mass destruction, food shortages, epidemics, illegal migration and regional conflicts."

Lavrov, who has served as Russia’s foreign minister for a decade, said that the old “Cold War blocs” are no longer relevant in a “multipolar world,” and instead called for an emergence of “flexible and networked”alliances.

“We do not consider it a tragedy if some of our partners disagree with us on certain issues – as opposed to NATO, where any step out of line is punished immediately.”

When asked why Moscow hasn’t recognized the self-proclaimed Donetsk and Lugansk People’s Republics during the Q & A that followed the speech, Lavrov told his audience that Moscow was not interested in the breakup of Ukraine, but said that he hoped the anti-Kiev movements would secure greater rights for Russian-speaking minorities in the country.
“The gains that have been made by these republics should consolidate the region in their quest for what is most important – that they can continue living in these areas as did their ancestors, speaking Russian, teaching their children in Russian schools, and electing their own governors, as well as having the chance to retain some of the taxes they pay as a result of their economic activities.”

He also said that any settlement must be signed after a ceasefire, not “imposed” by Kiev “under the cover of bomb blasts.”

When questioned about the touted use of US-made fuel in the country’s four active Soviet-built nuclear power plants, Lavrov warned that the changeover would be “unsafe,” as the fuel rods are incompatible.“Such experiments could end badly, particularly in Ukraine, where the memory of Chernobyl is still fresh,” Lavrov said.

Under the pretext of an 'overt' Russian threat, NATO is pushing for a ‘readiness action plan’ that will bring the Cold War military bloc closer to Russian borders than ever - even despite objections from some NATO members. James Corbett, editor of the Corbett Report, an independent Japan-based news outlet, gave his perspective on the matter.

Civilian areas remain in the sights of Ukraine's army in the country's East - with residential parts of Donetsk and Lugansk being hit on a daily basis. Kiev says it's only targeting rebel fighters. The outskirts of the regional hub, Donetsk, have come under violent shelling once again – RT’s Paula Slier has more.