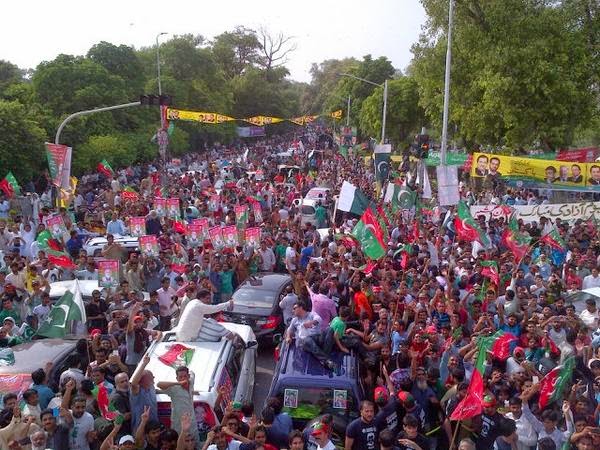 While most of the world is busy following the turmoil and war theatre in the Middle East and Ukraine, another war is continuing in Pakistan.

There is a revolution brewing which does not bear the hallmarks of the US sponsored kind. And as such is being opposed by every organ of the Pakistani puppet state.
There is a slow motion civil war where 40,000 Pakistanis have lost lives because of America’s Global War on Terror. A gift that keeps on giving as Pepe Escobar so aptly puts it. Thousands of civilians have perished and the government continues to dance to the tunes set by the IMF, United States and it’s cronies & the local puppet oligarchy.
As with most vassal states, the establishment and the status quo is ferociously defended by the Imperial Mouthpieces. And as with most conscious people, the majority of the country has grown weary of the false empty promises of a puppet state masquerading as Pakistan’s embryonic “democracy”.

The most revolutionary voice out of Pakistan right now is Pakistan Tehrek-e-Insaaf’s Imran Khan. Who is a popular cricket star turned politician. He has had a string of successes right from the cricketing world to his ambitious social project of a free cancer care hospital in Lahore, Pakistan. He has been in politics for approximately 18 years and has grown year on year, made mistakes, learned from mistakes and has kept marching on. He is a man with a vision and destiny, regardless of what his opponents say.
Imran is an ethnic Pushtun from the central province of Punjab and is unique in his appeal to a cross section of a strong 180 million Pakistani population divided across ethnic and religious lines.
Of course  for anyone who speaks about national interest and an independent foreign & domestic policy, Imran Khan is maligned daily by the elitists in Pakistani society. The usual hand picked puppet class vis a vis other client states.
Imran Khan has long been ridiculed in the national English press, especially Dawn. Which is the usual colonial chapter instrument of the Ministry of Propaganda. The NY Times, Washington Post or Kyiv Post of Pakistan. Imran Khan has been called even Taleban Khan for trying to negotiate with the Taleban.

The neoliberal puppet regime’s idea of a solution is to continue US drone strikes and military operations in Pakistan’s tribal areas where every man is a trained,seasoned and willing warrior. What was a few thousand militants has now, thanks to the “War on Terror”, grown into a full blown insurgency with a sympathetic population. Imran Khan has correctly stated that when the local population considers the militants as freedom fighters, then the war is already lost.

To take a gun from a tribal is like trying to take jewelry from a woman. What is the end game here? Kill 1 million Pakistanis so that America will be satisfied?

Of course the only solution is to eliminate the root cause of terrorism; American interference and drone strikes on the innocent civilians of Pakistan. Then only can Pakistan address it’s internal problems with extremism, an inadequate education system and poverty amongst a host of issues that have been left hanging for 60 odd years.

The biggest threat geopolitically to any puppet state is a united nation be it under an ayatollah or a dictator. A sovereign domestic and foreign policy is of primal importance. Without it, there is no democracy.  So who benefits from the status quo pathetic excuse for a democracy?

The answer always seems to be the US sympathetic oligarchy (include your industrialists, bankers, waderas etc). Oligarchy is not just restricted to the post soviet space, its a class that exists in most countries in varying shades and may easily work against the national interest.

The current billionaire Prime Minister,who is in power despite unaddressed claims of evidence of electoral fraud (a special Imperial gift to the 3rd world vis a vis Columbia and other vassal states), Nawaz Sharif was hosted in exile by Saudi Arabia and is an ally of the United States of America. Do I really need to explain further?

Everything is being analyzed on a micro level on an insane notion that free market hinged neoliberal democracy (that is literally destroying the planet) is good and will, and here is the kicker, save Pakistan from imminent doom should a social revolution succeed.

The typical establishment apologist jabs, like the one in yesterday’s Dawn newspaper, are replicas of “intellectual opinion” found across the mainstream presstitute media[1].
The aforementioned piece is essentially centered on two threats, to the social movement’s stated objectives, by the vassal state’s prime ally, the central bank.

The protesters at the capital on 16 August, two days after the National Day triggered march on the capital.

The following is very telling of what passes for normal in a vassal state.

“They could continue running the government and meeting its bills by running into overdraft with the State Bank, but they should know that the bank has in the past felt free to bounce provincial government cheques when it felt that the provincial authorities were being irresponsible in managing their finances.”

Translation: The central government can cut you off financially and watch you starve. A pretty brutal neoliberal “democratic” principle. A completely savage approach to collectively punish a people for dissent.

The idea of force is dismissed out of hand with one quick quip: “… threats that nobody is likely to take seriously.” and then another swift blow is dealt with “Without the revenue, will it also cut expenditures accordingly? “. The author is a classic mainstream journalist the likes of whom are now well known in other Imperial Mouthpieces like the NY Times, Guardian, Economist etc.

I simply do not see why there is such hatred,contempt (and ultimately fear) of a social movement? Why not suggest ideas or perhaps entertain the idea of well, a revolution.

In a revolution, you do use force where necessary. You do perhaps divert revenue from elsewhere and when the centre cuts you off, you march to the capital. But wait, they are already in the capital. This could actually happen, even if the chance is remote. That is why the organs of state are working overtime to kill the threat to the status quo.

Noam Chomsky beautifully sums it up when he says : “The smart way to keep people passive and obedient is to strictly limit the spectrum of acceptable opinion, but allow very lively debate within that spectrum….”
The spectrum of Pakistani neoliberal elite opinion rests on the foundations of a unicorn utopian democracy emerging from a corrupt rotten system that murders its citizens for dollars. Not just that but a system that has been pillaging the country for decades. But if any attempt to circumvent this “colonial democracy” is made, it will jeopardise the fairytale chance of Pakistan correcting course via the ballot box (which is routinely rigged in favor of the puppet oligarch of the hour).
Recently the Finance minister flew back from Dubai to answer Pakistan Tehrek-e-Insaf (PTI)’s white paper on government corruption[2]. He was attending the latest round of meetings with the IMF which has been raping Pakistan for decades.

So, who benefits from all this? The establishment,it’s sycophants and the classic hodge podge of neoliberal elites.