Of course the semantic difference between “soldiers from Russia” and “Russian troops” will be beyond Obama, especially if he wants an excuse to extend sanctions
---SMR

Putin: go ahead, call it an invasion. Call it a WAR. I dare you. Then we'll have to give you a real one and there will be no going back. Do it.

West: stop...your...uh...doing stuff that's bad & stuff... in our pet "new Ukraine". You must accept our regime change! And pretty please stop the bad stuff with the bad people. Or... or... sanctions... sanctions!

Obama threatens Russia with new sanctions over Ukraine
President Barack Obama acknowledged during an impromptu press conference on Thursday afternoon that the United States is considering new sanctions to impose against Russia over the escalating crisis in Ukraine. 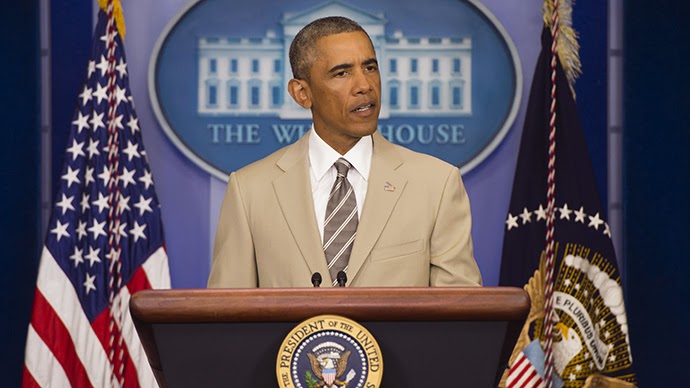 From the White House, Pres. Obama told reporters that he’s certain Russia is playing a direct role in the ongoing fighting in eastern Ukraine between anti-Kiev separatists and the country’s military, and that the US is weighing further sanctions to intensify the restrictions previously waged against Moscow.

“As a result of the action Russia has already taken and the major sanctions we’ve imposed,” Obama said, “Russia is already more isolated than any time since the end of the cold war.”

“The separatists are backed, trained, armed, financed by Russia. Throughout this process we’ve seen deep Russian involvement in everything that they’ve done,” Obama added.

That behavior, he added, “will only bring more cost and consequences to Russia.” After speaking with allies, Obama continued, he expects a new wave of sanctions to come soon. The president is expected to meet with NATO partners next week, and said the US “will continue to stand firm with our allies and partners” to protect Ukraine from further encroachment.

“In our consultation with our European allies,” Obama said, “…my expectation is we will take additional steps, primary because we have not seen any meaningful action on the part of Russia to try and actually resolve this in a diplomatic fashion.”

Earlier Thursday, US State Department spokesperson Jen Psaki said during a press conference that there are “additional tools and sanctions” being considered against Russia.

Psaki and the president’s remarks sandwiched a meeting of the United Nations Security Council in New York City, during which representatives from the US, United Kingdom, Australia and others all urged Russia to refrain from further escalating the situation near its border with eastern Ukraine.

“In the face of this threat, the cost of inaction is unacceptable," Samantha Power, the US ambassador to the UN, said during the meeting.

On his part, Pres. Obama added that the US has ruled out the possibility of a military response.

“We are not taking military action to solve the Ukrainian problem. What we’re doing is to mobilize the international community to apply pressure on Russia. But I think it is very important to recognize that a military solution for this problem is not going to be forthcoming,” he said.

“Ukraine is not a member of NATO, but a number of those states who are close by are,” he added, “and we take our Article Five commitments to defend each other very seriously — and that includes the smallest NATO member as well as the largest.”

NATO released new satellite images on Thursday, 28 August 2014, that show Russian combat forces engaged in military operations inside the sovereign territory of Ukraine. The images, captured in late August, depict Russian self-propelled artillery units moving in a convoy through the Ukrainian countryside and then preparing for action by establishing firing positions in the area of Krasnodon, Ukraine. Russia's response - "reports on Russian troops in Ukraine are false."

Via USNATO,
The source of the images is an independent firm named Digital Globe. The images have not been altered or changed by NATO. Additional information has been added to identify locations, dates and equipment. DigitalGlobe images can be independently verified: http://www.digitalglobe.com
Story by SHAPE Public Affairs Office 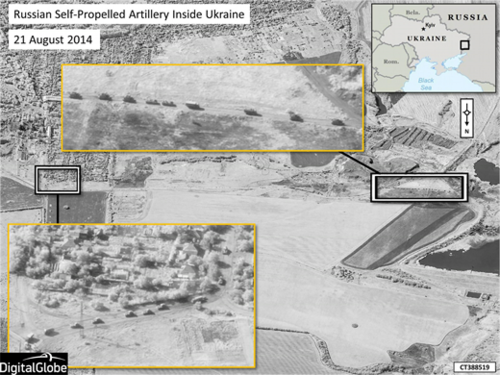 Image 1 shows Russian military units moving in a convoy formation with self-propelled artillery in the area of Krasnodon, Ukraine, well inside territory controlled by Russian separatists. The image was captured on 21 August 2014. There is confidence the equipment is Russian, since Ukrainian units have not yet penetrated this far into separatist controlled territory 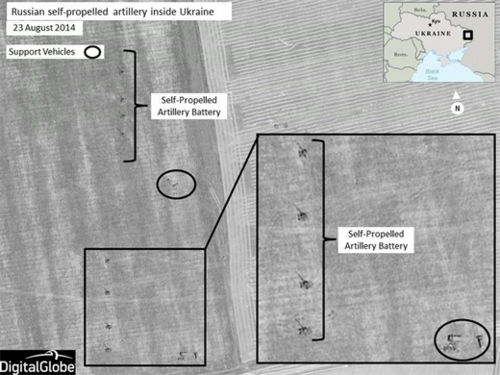 Image 2 shows Russian self-propelled artillery units set up in firing positions near Krasnodon, Ukraine. They are supported by logistical vehicles which are likely carrying extra ammunition and supplies. This configuration is exactly how trained military professionals would arrange their assets on the ground, indicating that these are not unskilled amateurs, but Russian soldiers. Russian artillery systems like these have recently shelled Ukrainian positions outside the city of Luhansk in conjunction with a separatist counteroffensive to attempt to break the Ukrainian siege of the city 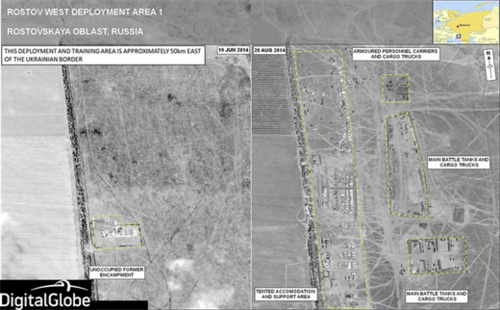 Image 3 includes two pictures (left and right) and shows a military deployment site on the Russian side of the border, near Rostov-on-Don. This location is approximately 31 miles or 50 kilometres from the Dovzhansky, Ukraine border crossing.

The image on the left was captured on 19 June 2014 and shows the area to be mostly empty at this time. The image on the right was taken two months later on 20 August 2014 and shows the same location. Russian main battle tanks, armored personnel carriers, cargo trucks and tented accommodations can all be clearly seen. This is one example of the multiple encampments that Russia has positioned near its border with Eastern Ukraine. Many of these forces are deployed within a few kilometers of Ukraine, and are capable of attacking with little warning, and could potentially overwhelm and push-back Ukrainian units. Russia has also moved significant numbers of combat aircraft and helicopters to airfields along the border. Russian unmanned aircraft routinely cross into Ukrainian airspace.

Some equipment from these locations is moved across the border and is used to resupply and equip separatist forces operating in Ukraine. For months, Russia has provided separatist fighters with heavy equipment in the form of tanks, armored vehicles, artillery, and multiple rocket launchers. Air defense systems have also been provided to separatists, even following the downing of Malaysian airlines flight MH17 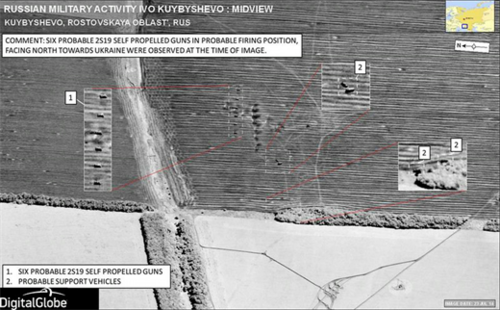 Image 4, captured on 23 July 2014, depicts what are probably six Russian 153mm 2S19 self-propelled guns located in Russia near Kuybyshevo. This site is situated 4 miles, or 6.5 kilometres, south of the Ukraine border, near the village of Chervonyi Zhovten. The guns are pointed north, directly towards Ukrainian territory (see North indicator on image). See image 5 for an overview of where these guns are situated in relation to Ukrainian territory. 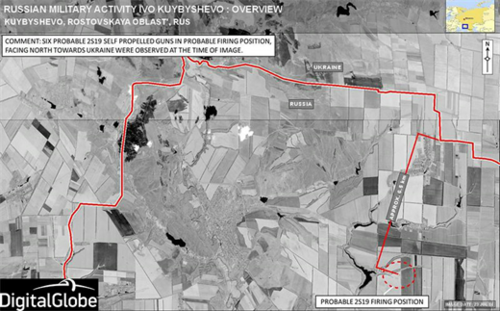 Image 5 shows a wider overview including the position of the self-propelled guns from image 4. Note the North indicator on this image, and remember that the guns are orientated in this location. It is clear that from this location, it would be impossible NOT to fire into Ukrainian territory. This is clearly NOT an exercise; these guns are being used to support separatist forces operating in the territory of Ukraine.
*  *  *
"Proof" indeed...
*  *  *
Merkel looking...
*MERKEL: RECEIVING REPORTS ON RUSSIA TROOP PRESENCE IN UKRAINE
*MERKEL SAYS EU TO DISCUSS POSSIBLE TOUGHER RUSSIA SANCTIONS
*  *  *
Russia's reponse:
*RUSSIA SAYS REPORTS ON ITS TROOPS IN UKRAINE ARE FALSE: RIA

Of course the semantic difference between “soldiers from Russia” and “Russian troops” will be beyond Obama, especially if he wants an excuse to extend sanctions

“I would advise Western politicians and the public at large to avoid yielding to such media provocations. Many seem to be quite accustomed to hearing lies, if you don’t mind my saying so, from officials in Kiev. Just don’t believe them,” Naryshkin told the media on Thursday.

He quoted a number of examples to explain what made him so certain. “Firstly, they are talking about a high concentration of Russian troops on the border. I would ask this counter question: what would the defense ministry of any other country be doing at a time when full-scale combat operations involving heavy armaments, multiple rocket launchers and aircraft were on in the territory of a neighboring state? In the meantime, this is precisely what is happening to our regret in the territory of a fraternal country, Ukraine,” Naryshkin said.

He believes that in such situations "any country is in a position to take proportionate steps to ensure its own security".

Another example Naryshkin mentioned concerned the presence of troops in the territory of neighboring states. “Just take a look at how many cases there were of Ukrainian military in large numbers crossing the border into our territory,” Naryshkin said.

He recalled that whenever that happened, Russia extended a helping hand. The military were fed and given first medical aid and none of such incidents was presented as a provocation by Ukraine.

“I would like to ask why have the Western mass media and politicians never raised their voices to declare such incidents were acts of aggression or of military intrusion into the Russian territory? Such things never happened and they should be regarded calmly,” Naryshkin said.

He sees no need for calling an urgent meeting of the lower house of parliament in the wake of Poroshenko’s statement. “We keep working as usual,” Naryshkin said
Posted by seemorerocks at 09:22