Council On Foreign Relations: The Ukraine Crisis Is the West’s – Not Putin’s – Fault
George Washington 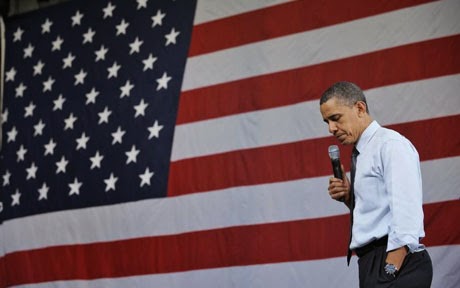 We’ve previously reported that it’s the West’s encirclement of Russia – breaking a key promise which led to the break-up of the Soviet Union – which is behind the Ukraine crisis.

The U.S. State Department spent more than $5 billion dollars in pushing Ukraine towards the West.  The U.S. ambassador to Ukraine (Geoffrey Pyatt) and assistant Secretary of State (Victoria Nuland) were also recorded plotting the downfall of the former Ukraine government in a leaked recorder conversation.  Top-level U.S. officials literally handed out cookies to the protesters who overthrew the Ukrainian government.

And the U.S. has been doing everything it can to trumpet pro-Ukrainian and anti-Russian propaganda. So – without doubt – the U.S. government is heavily involved with fighting a propaganda war regarding Ukraine.
The news is starting to go mainstream …
Specifically, the Council On Foreign Relations (CFR) is a very mainstream, hawkish group.
CFR’s flagship publication – Foreign Affairs – has just published a piece blaming the Ukraine crisis on the West.
The piece by John Mearsheimer – in it’s September/October 2014 issue – accurately notes:

The United States and its European allies share most of the responsibility for the crisis. The taproot of the trouble is NATO enlargement, the central element of a larger strategy to move Ukraine out of Russia’s orbit and integrate it into the West. At the same time, the EU’s expansion eastward and the West’s backing of the pro-democracy movement in Ukraine — beginning with the Orange Revolution in 2004 — were critical elements, too. Since the mid-1990s, Russian leaders have adamantly opposed NATO enlargement, and in recent years, they have made it clear that they would not stand by while their strategically important neighbor turned into a Western bastion. For Putin, the illegal overthrow of Ukraine’s democratically elected and pro-Russian president — which he rightly labeled a “coup” — was the final straw. He responded by taking Crimea, a peninsula he feared would host a NATO naval base, and working to destabilize Ukraine until it abandoned its efforts to join the West.  Putin’s pushback should have come as no surprise. After all, the West had been moving into Russia’s backyard and threatening its core strategic interests, a point Putin made emphatically and repeatedly. Elites in the United States and Europe have been blindsided by events only because they subscribe to a flawed view of international politics.

U.S. and European leaders blundered in attempting to turn Ukraine into a Western stronghold on Russia’s border. Now that the consequences have been laid bare, it would be an even greater mistake to continue this misbegotten policy.

The West’s final tool for peeling Kiev away from Moscow has been its efforts to spread Western values and promote democracy in Ukraine and other post-Soviet states, a plan that often entails funding pro-Western individuals and organizations. Victoria Nuland, the U.S. assistant secretary of state for European and Eurasian affairs, estimated in December 2013 that the United States had invested more than $5 billion since 1991 to help Ukraine achieve “the future it deserves.” As part of that effort, the U.S. government has bankrolled the National Endowment for Democracy. The nonprofit foundation has funded more than 60 projects aimed at promoting civil society in Ukraine, and the NED’s president, Carl Gershman, has called that country “the biggest prize.” After Yanukovych won Ukraine’s presidential election in February 2010, the NED decided he was undermining its goals, and so it stepped up its efforts to support the opposition and strengthen the country’s democratic institutions.

When Russian leaders look at Western social engineering in Ukraine, they worry that their country might be next. And such fears are hardly groundless. In September 2013, Gershman wrote in The Washington Post, “Ukraine’s choice to join Europe will accelerate the demise of the ideology of Russian imperialism that Putin represents.” He added: “Russians, too, face a choice, and Putin may find himself on the losing end not just in the near abroad but within Russia itself.”

The West’s triple package of policies — NATO enlargement, EU expansion, and democracy promotion — added fuel to a fire waiting to ignite. The spark came in November 2013, when Yanukovych rejected a major economic deal he had been negotiating with the EU and decided to accept a $15 billion Russian counteroffer instead. That decision gave rise to antigovernment demonstrations that escalated over the following three months and that by mid-February had led to the deaths of some one hundred protesters. Western emissaries hurriedly flew to Kiev to resolve the crisis. On February 21, the government and the opposition struck a deal that allowed Yanukovych to stay in power until new elections were held. But it immediately fell apart, and Yanukovych fled to Russia the next day. The new government in Kiev was pro-Western and anti-Russian to the core, and it contained four high-ranking members who could legitimately be labeled neofascists.

Although the full extent of U.S. involvement has not yet come to light, it is clear that Washington backed the coup. Nuland and Republican Senator John McCain participated in antigovernment demonstrations, and Geoffrey Pyatt, the U.S. ambassador to Ukraine, proclaimed after Yanukovych’s toppling that it was “a day for the history books.” As a leaked telephone recording revealed, Nuland had advocated regime change and wanted the Ukrainian politician Arseniy Yatsenyuk to become prime minister in the new government, which he did. No wonder Russians of all persuasions think the West played a role in Yanukovych’s ouster.

Putin’s actions should be easy to comprehend. A huge expanse of flat land that Napoleonic France, imperial Germany, and Nazi Germany all crossed to strike at Russia itself, Ukraine serves as a buffer state of enormous strategic importance to Russia. No Russian leader would tolerate a military alliance that was Moscow’s mortal enemy until recently moving into Ukraine. Nor would any Russian leader stand idly by while the West helped install a government there that was determined to integrate Ukraine into the West.

Washington may not like Moscow’s position, but it should understand the logic behind it. This is Geopolitics 101: great powers are always sensitive to potential threats near their home territory. After all, the United States does not tolerate distant great powers deploying military forces anywhere in the Western Hemisphere, much less on its borders. Imagine the outrage in Washington if China built an impressive military alliance and tried to include Canada and Mexico in it. Logic aside, Russian leaders have told their Western counterparts on many occasions that they consider NATO expansion into Georgia and Ukraine unacceptable, along with any effort to turn those countries against Russia — a message that the 2008 Russian-Georgian war also made crystal clear.

In [a] 1998 interview, [the top American expert on Russia, George] Kennan predicted that NATO expansion would provoke a crisis, after which the proponents of expansion would “say that we always told you that is how the Russians are.” As if on cue, most Western officials have portrayed Putin as the real culprit in the Ukraine predicament.

Mearsheimer gives a way out of this mess:

There is a solution to the crisis in Ukraine, however — although it would require the West to think about the country in a fundamentally new way. The United States and its allies should abandon their plan to westernize Ukraine and instead aim to make it a neutral buffer between NATO and Russia, akin to Austria’s position during the Cold War. Western leaders should acknowledge that Ukraine matters so much to Putin that they cannot support an anti-Russian regime there. This would not mean that a future Ukrainian government would have to be pro-Russian or anti-NATO. On the contrary, the goal should be a sovereign Ukraine that falls in neither the Russian nor the Western camp.

The United States and its European allies now face a choice on Ukraine. They can continue their current policy, which will exacerbate hostilities with Russia and devastate Ukraine in the process — a scenario in which everyone would come out a loser. Or they can switch gears and work to create a prosperous but neutral Ukraine, one that does not threaten Russia and allows the West to repair its relations with Moscow. With that approach, all sides would win.

Will saner heads prevail, and back away from the abyss before it’s too late?
And see this.