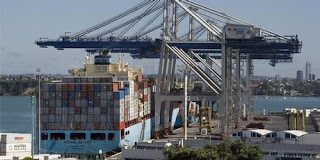 New Zealand Herald
New Zealand's current account deficit widened in the second quarter, as foreigners earned more from their local investments, including insurance companies that incurred earthquake-related losses in the first three months of the year.
The current account gap was $2 billion in the three months ended June 30, up from $1.53 billion in the first quarter, according to Statistics New Zealand. The annual gap grew to $7.47 billion, or 3.7 per cent of gross domestic product, from a revised deficit of $7.2 billion, or 3.6 per cent of GDP three months earlier.
The balance of payments figures have provided a counter-intuitive snap-shot of New Zealand's external position, with the deficit shrinking last year because foreigners earned less here and a weak domestic economy took in less imported goods. Now that profitability is improving and imports rising, the figures are painting a gloomier picture.
The income deficit widened to $2.5 billion in the second quarter from $2.16 billion three months earlier. Foreign investors' earnings from investments in New Zealand rose by $700 million, as insurers made smaller losses.
The government statistician has revised its measurement of New Zealand's external assets, including use of updated tax department data. It shows the nation's external liabilities exceeded assets by $140.2 billion at June 30, amounting to 70 per cent of GDP, from revised net liabilities of $136 billion, or 68.7 per cent at March 31.
The revisions added some $10 billion to the measure of overseas assets. The nation's international financial liabilities edged up to $253.9 billion from $253.5 billion at March 31.
The surplus on international trade weakened to $700 million, as a weaker balance on services more than offset an improved goods surplus driven by exports of dairy and meat, which pushed the terms of trade to a 37-year high in the latest three month period.
Overseas visitors spent $148 million less in the June quarter than three months earlier, with travel disrupted by the ash cloud from the Chile volcano, and following the February 22 earthquake in Canterbury.


Economists were expecting a quarterly deficit of $690 million, for an annual gap of $7.98 billion, or 4 per cent of gross domestic product, down from $8.3 billion, or 4.3 per cent, in the first quarter.
Posted by seemorerocks at 12:11