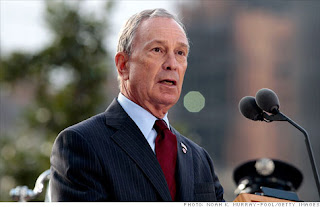 NEW YORK (CNNMoney) -- New York City Mayor Michael Bloomberg is worried that high U.S. unemployment could lead to the same kind of riots here that have swept through Europe and North Africa.
"You have a lot of kids graduating college, [who] can't find jobs," said Bloomberg, during his weekly radio show on Friday. "That's what happened in Cairo. That's what happened in Madrid. You don't want those kinds of riots here."
That was the mayor's response when asked about the poverty rate, which rose to 15.1% in 2010, its highest level since 1993, according to census data released Tuesday. About 46.2 million people are now living in poverty, 2.6 million more than last year.
"The public is not happy," he said. "The public knows there is something wrong in this country, and there is. The bottom line is that they're upset."
Riots have gripped various countries in European cities, including Athens and London, fueled by young people infuriated by high unemployment and austerity measures, which in some cases has led to looting. High unemployment among youth is also one of the driving forces behind the Arab Spring, as impoverished protestors in North Africa and the Middle East rose up against their heavy-handed governments.
"The damage to a generation that can't find jobs will go on for many, many years," said Bloomberg.
For article GO HERE
Posted by seemorerocks at 14:18