"That's right... the crimes and debt of governments and financial institutions are going directly on the backs of taxpayers. And who will carry the weight? The people who will "pay" for this impossible largess through austerity measures, failing infrastructure, and liquidation of public and sovereign wealth directly into the hands of the bankers. Meantime, we're all holding our breath through the end of the week. -- MCR" 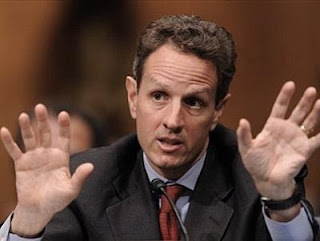 Business Insider,
27 September, 2011
God's gift to Wall Street, Secretary Treasury Tim Geithner, says he has finally convinced Europe that the world will end if Europe doesn't bail everyone out the way the US did.
On ABC's World News With Diane Sawyer, Geithner said that Europe finally gets it:
“If you listen carefully to what they said this weekend, not just to us in private, but what they said publicly, they’re foreshadowing now the escalation that’s going to come. And we’d like them to get on with it.”
The "escalation," presumably, is a full-on Euro-TARP bailout, in which the losses on the idiot loans made by Europe's banks to Europe's fringe countries are transferred to Europe's taxpayers.
One can only hope that the rescue plan willl include forced bank writedowns and recapitalizations, which Geithner's US version of the bailout didn't--an error for which the country is still paying the price.
Geithner put the fear of God in Europe at the IMF meeting, at which he warned of “cascading default, bank runs and catastrophic risk” if Europe didn't get the situation under control.
EU Goes From Monetary Union To Suicide Pact
Zero Hedge,
26 September, 2011
As alleged details are leaked about an alleged proposal to leverage the EFSF all I can do is cringe. I'm waiting for some actual details, but as far as I can tell, Europe is attempting go all in. It is going to make leveraged bets on itself. If it doesn't work, the senior debt holders will own Europe if the BRICs buy the senior tranche and will end in a fast and furious death spiral if the senior tranche is owned by the ECB or European banks. We may get a lift on the news. We are trying to rally on the back of the news right now. But if this plan goes ahead, even the slightest cold in the future will turn into the plague. There will be no strong countries left as they will have tied themselves to the PIIGS anchor with a Gordion Knot that will never be untied in time.
Haven't they seen what happens to SIV's? Are the so confident in an economic recovery that will risk it all at this time? If they get it wrong and it doesn't work, there will be no fall back.
All I can hope is they are tired and too happy with the late night "solution" and the markets initial reaction that after the initial euphoria, cooler heads, like Schaeuble, will prevail. This has the makings of an Epic disaster in the making.
The plans to ring fence Greece, to erect support for banks and other countries all made sense. Painful, but made sense. If this even manages to avoid pain, it ensures the next crisis won't be manageable.
I do like the idea that the EFSF is going to become an "investment bank". At least it is consistent with solving every problem with more of the same.  The best part will be when they pay up to poach talent from the banks that they are bailing out. With Gardening leave in Europe it should take about 6 months before the first employee can start.
I will take a look at the details but in meantime, for first time in this crisis, am worried that not only are they doing something that won't work, but something that will make the problem intractable and ensure that the crisis ends worse than anything we had post Lehman.
and the latest from a more conventional point of view
Merkel tries to rally support for Greece and euro ahead of crucial EFSF vote
Chancellor faces widespread scepticism to enlarging eurozone bailout fund among German public and her own MPs 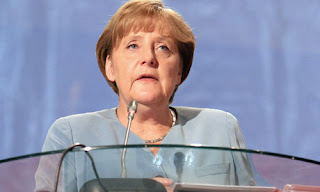 Germany pledged support to Greece today in a desperate effort to shore up the eurozone, but fell short of revealing the package of measures that the markets hope will be enough to save the single currency.
The chancellor, Angela Merkel, pledged solidarity at a meeting with her Greek counterpart, George Papandreou, just two days ahead of a crucial vote in the German parliament on the expansion of the bailout fund, which is regarded as the first step to increasing the firepower of the eurozone countries enough to buy up bonds and buttress troubled banks.
However, conscious of animosity among the majority of German voters towards helping the less prudent nation, Merkel attached strings to her support, calling on Greece to "do its homework" in implementing painful cuts and reforms.
For article GO HERE
Posted by seemorerocks at 11:05