Coverage of Deepwater Horizon - from the British media?! 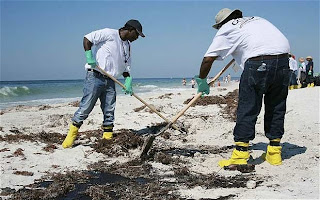 the Telegraph
21 September, 2011
Researchers from Auburn University found the environmental impact of the spill is continuing 17 months since oil leaked into the ocean, after an explosion on the Deepwater Horizon.


They found that "mats" submerged in the seabed for more than a year had been broken up by tropical storms and gave off the tar balls.


The pollution found on Alabama beaches this month had "essentially identical" chemical composition to those from after the spill.
Researchers now "question the validity of the widely-held belief that submerged oil from the Deepwater Horizon accident is substantially weathered and depleted".
BP said it would "continue to have crews out collecting tarballs as the reports come in" but the report would not change its immediate plans.
On Wednesday, BP's share price dropped 1.3pc to 409.1p as it also emerged that the group of obscure Russian investors suing BP and two of its senior staff have almost doubled their claim to £3.1bn.
The lawsuit follows ongoing tensions at TNK-BP between its joint owners, BP and four oligarchs.
Small shareholders in TNK-BP, led by Andrey Prokhorov, claim the British company caused the joint venture to be excluded from a £10bn deal with Russian state oil company Rosneft. They originally filed a claim for £1.75bn, strongly contested by BP, but they now allege that losses are higher as they had not included overseas opportunities
Posted by seemorerocks at 11:40