Look out! More on China 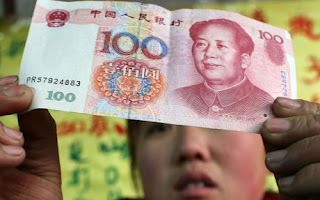 
Here is an interesting email from reader "Kevin" regarding the crashing loan-shark market in China.


I am a long time reader and want to bring to your attention on a new development in China: private business owners are disappearing or jumping off buildings because they can no longer pay off black market shark loans.


According to national new paper Economics Information (part of state media Xinhua), on 9/22, Hu Fulin, owner of the biggest eyeglass manufacture of the city of Wenzhou disappeared, leaving behind 2 billion RMB debt.


On 9/27, owner of "Zhengdeli", a shoe manufacture jumped off of a 22 story building and killed himself.


Since April this year 29 private business owners have disappeared, all of them had over 100 million RMB businesses. 11 of the 29 owned shoe manufacturing businesses.


An analyst from China Investment (China's Sovereign investment fund) pointed out that it's because they are squeezed by a rapid increase of component and labor costs. A rising RMB is also a reason why many export oriented companies are hit. In August, Zhou Dewen, President of Wenzhou Small-Medium Business Development Association said the profit margin of Small-Medium businesses in Wenzhou has dropped to under 5% and absent of policy changes, 40% of businesses in Wenzhou will go out of business by next Spring Festival (late Jan 2012)”


Another article http://finance.sina.com.cn/roll/20110929/005910558780.shtml (titled: China's Shark Loans Crashing; "Grey Finance" Brewing the Chinese Crisis) states that most of those owners have borrowed "private" loans (typically 70% of all loans), with MONTHLY interest rate ranging from 3% to 10%.


About 89% of families/individuals and 59% of companies in Wenzhou participated in such "private loan" schemes. In Erdos (the ghost city you blogged many times), such "private loans" are more than 200 billion RMB with annual interest rate over 60%. Now they are crashing, causing rampant unfinished real estate projects in Erdos.


Note that Wenzhou is one of riches cities in China (No. 3 in disposable income per capita), and is considered the "Birthplace of China's Private Economy". Wenzhou people are among the first that got in trades, manufacturing, export, and in recent years real estate investment/speculation. The Wenzhou economy is considered the "weathercock" of Chinese economy.”


"Economic Information Daily" correspondent from the multi-confirmed the day before and then there were two causes of Wenzhou City, inability to repay loan sharks and jumping events. According to informed sources, the two business owners are the local shoe factory owner, debt of millions.


Since April this year, Wenzhou, missing more than 80 business owners, the company closed, the event staff pay talks, since September alone, there are up to 25 cases. A local lender told reporters, "At present, only the flight of capital Longwan area estimated to have 100 million or more, many SMEs liabilities, the banks accounted for 30%, accounting for 70% civil usury."


Some sharks can reach up to 180% per annum. ... "many companies debt snowball, private lending market has not been given attention now has about 25% local to 30% of companies in trouble, some in the suspension or semi-shutdown state, but by the end of this class companies are more likely accounted for 40% to 50%. "


The translations are choppy, but the ideas very easy to spot. 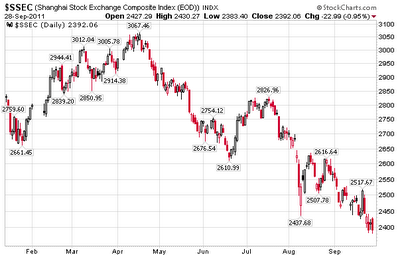 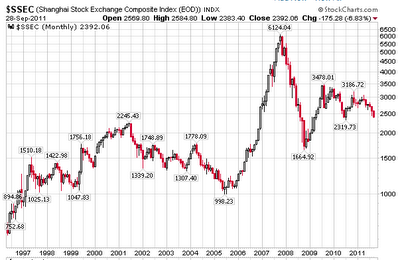 The Shanghai stock market depicts a credit bubble that collapsed in 2008, partially rebounded, and is sinking once again.


China did not decouple from the global economy, nor is there any reason to believe it will, or should. China's debt bubble, housing bubble, and copper Ponzi financing schemes are collapsing.

Wall Street Journal
BEIJING—Rapidly rising wages in China have reached the point at which foreign manufacturers need to give up on the notion of the country as a low-cost production base, a senior Hyundai Motor Co. executive said Thursday.
Jae-Man Noh, head of Hyundai's joint-venture operations in China, said average manufacturing-worker wages in China—about 27,000 yuan ($4,200) a year per worker in 2009—are likely to double by 2015 from current levels.
Auto makers are expected to be affected as much as other industries by the trend, if not more, Mr. Noh said, adding that wage costs for many foreign auto manufacturers already have doubled in less than a decade. He said that a rival foreign auto maker that Hyundai has researched has seen worker wages in China rise to 49,000 yuan a year per worker in 2010, up from 24,500 yuan a year in 2003.
"We need to let go of our perception that the Chinese market is a low-cost production base," Mr. Noh told a group of reporters at Hyundai's office in Beijing. He didn't offer specifics on Hyundai's wage costs in China.
For article GO HERE
Posted by seemorerocks at 17:53