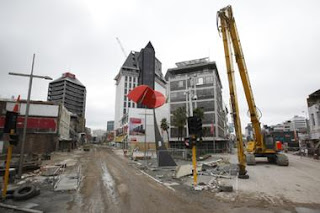 Radio New Zealand
Government-backed insurer AMI has reported a heavy loss due to the cost of earthquake claims.
The Christchurch-based company lost $705 million in the year to June compared to a $33 million profit the previous year.
The company says the cost of claims from the three major earthquakes in Canterbury in the past year is more than the $500 million it has in reinsurance cover.
Nearly all the shortfall relates to the 22 February earthquake.
AMI has also added another $229 million to cover the prospect of higher claim costs.
The company says the final cost remains unknown and it is drawing on its reinsurance and reserves to meet claims as they come due.
The insurer says it has $2.3 billion in assets and chairman Kerry Nolan is confident the company will not need to call on Government's $500 million financial backstop package.
The company is seeking fresh capital to strengthen its financial position.
Meanwhile, Finance Minister Bill English says the current estimate of the likely cost to the Government if its support package is called upon is $337 million.
Posted by seemorerocks at 13:57