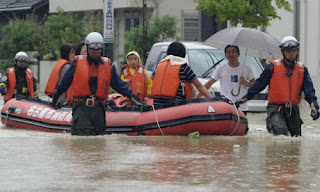 the Guardian,
21 September, 2011
More than a million people in central Japan have been urged to evacuate as the country braces for the arrival on Wednesday of a powerful typhoon.
Reports said evacuation warnings had been issued to 1.3 million people, including 800,000 in the city of Nagoya, 170 miles (270km) west of Tokyo.
Typhoon Roke is thought to have killed five people even before it makes landfall. Police in Gifu prefecture said a nine-year-old boy and an 84-year-old woman were missing after reportedly falling into a swollen river. The body of a middle-aged man was discovered in a river in Nagoya early on Wednesday morning.
Rolling TV weather forecasts warned that Roke would make landfall on Wednesday, bringing torrential rain and violent winds.
It is expected to cling to Japan's south-west coast before moving north-east over Tokyo and on to the north-east region affected by the 11 March earthquake and tsunami.
Nuclear officials played down fears the typhoon could cause further damage to the Fukushima Daiichi power plant, where workers are battling to cool reactors that melted down in the March disaster.
A spokesman for Tokyo Electric Power, the plant's operator, said cooling systems used to keep the reactors stable would not be endangered by the typhoon. Every possible measure had been taken to prevent leaks of radioactive water, he said.
The meteorological agency warned that rivers in parts of central Japan were overflowing. NHK television showed residents in some areas wading through knee-high water.
"In Aichi the heavy rain is causing some rivers to overflow," an agency official told reporters. "I would like to ask people to exercise caution against potential disasters from torrential rain, strong winds and high waves."
Roke's arrival comes two weeks after typhoon Talas triggered floods and mudslides that left 67 people dead and 26 missing.
The meteorological agency described the eye of Roke as "very strong" and advised residents living in its path to exercise the "greatest possible vigilance".
The approaching typhoon has already caused disruption to factories and power output.
Chubu Electric Power, which supplies the central region, said it had lost 1,870 megawatts of hydropower output but there was no threat of electricity shortages.
More than 200 domestic flights were cancelled and bullet train services were suspended in some areas.
Toyota said it would close 11 factories in central Japan early to ensure the safety of employees. The carmaker said it would make up for lost output on subsequent shifts. Many commuters in Tokyo have been advised to leave work early.
By mid-morning on Wednesday the typhoon was located about 25 miles (40km) off the Kii peninsula in western Japan, generating winds of up to 135mph (216km/h).
It was expected to reach the Tokyo area in the afternoon and the tsunami disaster zone in the evening.
Heavy rain is expected in many areas of Japan's main island of Honshu through to Thursday morning, according to Kyodo news agency.


Typhoon Roke Moves Away From Japan on Path Toward Kuril Islands
Sept. 21 (Bloomberg) -- Typhoon Roke moved back over the Pacific on a path to the Kuril Islands after causing flooding, transportation disruptions and at least three deaths in Japan.
Roke was just off Japan's northeast coast at about noon New York time with winds of about 130 kilometers (80 miles) per hour, according to the Japanese Meteorological Agency's website. The storm brought 40-kph winds to the area around the nuclear power plant in Fukushima stricken by an earthquake and tsunami earlier this year, said Jeff Masters, co-founder of Weather Underground Inc. in Ann Arbor, Michigan.
For story GO HERE
Posted by seemorerocks at 21:09