Demonstrations against the banksters 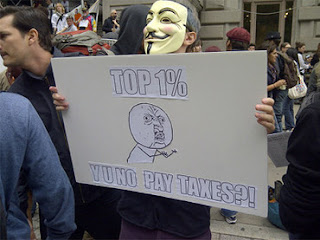 RT
18 September, 2011
Hundreds of demonstrators (Business Insider says 'thousands') gathered near Wall Street in New York City to protest against the existing financial system, which they say is the cause of the economic crisis and is fueling social injustice.
The organizers planned the rally on Wall Street for months to express anger over the rule of the “capitalist political system” and the rule of the rich. Some referred to the movement simply as September 17, after the date of the rally. Others dubbed it the “United States Day of Rage.”
The “Occupy Wall St.” movement had stated beforehand that its mission was to bring 20,000 people “to flood into Lower Manhattan, set up beds, kitchens, peaceful barricades and occupy Wall Street for a few months.”
According to the organizers, the demonstration was inspired by the massive protests that took place in Egypt, Greece, Spain and Iceland. An “Occupy Wall St.” group on Facebook calls on followers to “deploy this emerging stratagem against the greatest corrupter of our democracy: Wall Street, the financial Gomorrah of America.” 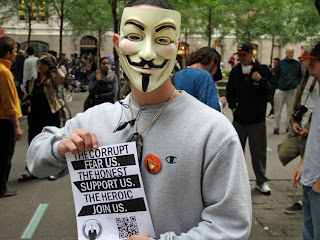 The protesters claim that they are “the 99 percent that will no longer tolerate the greed and corruption of the 1 percent.”
The activists have been coordinating the event through social media.
However, much of the protesters’ targets were blocked by police, who prepared for the demonstration and shut down sections of Wall Street near the New York Stock Exchange and Federal Hall, The New York Times reported.
Throughout the day, hundreds of people gathered in Lower Manhattan debating and waving signs with messages such as “Democracy Not Corporatization” and “End the Oligarchy.”
The protesters say they are going to rally all night long and are calling on people to join the demonstration on Sunday and Monday.

More on the demonstrations on Oil Free Fun