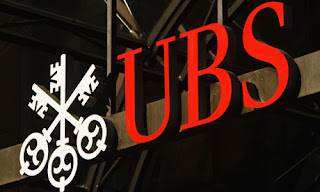 UBS sets up committee led by David Sidwell, independent director on the board, to investigate unauthorised transactions
the Guardian,
18 September, 2011
The boss of UBS is under fresh pressure after the Swiss bank upped the cost of the alleged rogue trading by Kweku Adoboli – to $2.3bn (£1.45bn) from $2bn – and claimed his activities had been hidden by "fictitious" trades.
Oswald Grübel, a veteran banker who was lured out retirement to try to rescue UBS two years ago, told the Swiss weekly Der Sonntag that he had no intention of resigning despite calls to take responsibility for the alleged rogue trading incident.
In attempt to explain the events that led up Adoboli being charged with fraud and false accounting on Friday less than 48 hours after being arrested by City of London Police, the Swiss bank said on Sunday said the losses had been incurred in the past three months through "unauthorised speculative trading" in futures contracts on stock market indices on the S&P 500 on Wall Street, Germay's Dax index and the Euro Stoxx index, which is based on basket of eurozone stocks.
The bank said Adoboli, who is in custody awaiting a bail hearing on Thursday, had hidden the extent of his trading activities because of "fictitious" trades, using complex financial instruments known as exchange traded funds. EFTs are designed to mimic market movements without holding the actual stocks.
For article GO HERE
Posted by seemorerocks at 18:09