Wall Street Journal
Swiss drug giant Roche Holding AG has stopped delivering its drugs for cancer and other diseases to some state-funded hospitals in Greece that haven't paid their bills, and may take similar steps elsewhere, a stark example of how the European debt crisis that has jolted global financial markets is having a direct effect on consumers.
In Greece, Roche is boosting deliveries to pharmacies, which have paid their bills more reliably, Chief Executive Severin Schwan said in an interview on Friday. Patients at some hospitals now must take their prescriptions to a local pharmacy, and, in the case of intravenous or injected cancer drugs, bring them back to the hospital to be administered, he said.
Mr. Schwan said patients haven't been deprived of their medication as a result of the new measures, which he said Roche may need to adopt in Spain, as well. Some state-funded hospitals in Portugal and Italy have also fallen far behind on payments, he said.
For article GO HERE
Antibiotics losing the fight against deadly bacteria

the Independant,
18 September, 2011
Our last line of defence against bacterial infections is fast becoming weakened by a growing number of deadly strains that are resistant to even the strongest antibiotics, according to new figures given to The Independent on Sunday by the Health Protection Agency (HPA).
The disturbing statistics reveal an explosion in cases of super-resistant strains of bacteria such as E.coli and Klebsiella pneumoniae, a cause of pneumonia and urinary tract infections, in less than five years.
For article GO HERE
Number of Children Poisoned by Medication Rising Dramatically, Study Says
Cincinatti Children’s
Friday, September 16, 2011
The number of young children admitted to hospitals or seen in emergency departments because they unintentionally took a potentially toxic dose of medication has risen dramatically in recent years, according to a new Cincinnati Children’s Hospital Medical Center study.
The rise in exposure to prescription products has been so striking that the Centers for Disease Control and Prevention has established the PROTECT Initiative, intended to prevent unintended medication overdoses in children.
For article GO HERE
Head of nuclear watchdog criticizes TEPCO over blacked-out documents 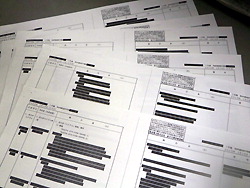 Mainichi News,
18 September, 2011
The head of a government nuclear watchdog has criticized Tokyo Electric Power Co. (TEPCO) for not being transparent enough, after it submitted documents earlier this month that were mostly blacked out.
"Why don't they release all the information? There are problems with TEPCO's attitude toward providing information," Hiroyuki Fukano, 54, head of the Nuclear and Industrial Safety Agency (NISA), told the Mainichi in an interview on Sept. 16.
The documents in question include an operation manual for responding to nuclear accidents.
For article GO HERE
Massive U.S. Embassy In Iraq Will Expand Further As Soldiers Leave

Huffington Post
WASHINGTON -- American combat troops in Iraq may be heading to the exits -- or not -- but the U.S. government's enormously expensive intervention there is hardly coming to an end.
In a telling sign of how dangerous and chaotic Iraq remains more than eight years after President George W. Bush launched the war against Saddam Hussein, U.S. diplomats, military advisers and other officials are planning to fall back to the gargantuan embassy in Baghdad -- a heavily fortified, self-contained compound the size of Vatican City.
For article GO HERE
Pakistan search for energy could run afoul of U.S. Iran sanctions

McClatchy
ISLAMABAD — Pakistan's power supply network is in deep crisis, pounding the economy and making life miserable for average Pakistanis. But one of the solutions that Pakistan has proposed to fix the problem, a natural gas pipeline from Iran, faces objections from the United States. This week U.S. officials warned Pakistan not to depend on Iran.
There is no place where the country's energy shortage isn't profound. Rural areas are without electricity for up to 16 hours a day while towns often go without for as many as 12 hours daily, forcing factories to close and plunging homes into darkness.
Natural gas supplies are rationed, with factories in the country's most populous province, Punjab, going without two days a week.
Pakistan's economic output is cut by at least 4 percent because of the shortages, the government estimates, something that hampers the country's hopes to battle extremism by creating more economic opportunities. The outages also feed political discontent, triggering frequent, if local, street protests.
Solving the energy problems is a top priority for the United States' aid program, with a State Department delegation here this week, led by Ambassador Carlos Pascual, the Obama administration's special envoy on international energy affairs.
But Pakistan's plans for a 1,700-mile natural gas pipeline from Iran, which would provide Pakistan with a cheaper source of fuel for electricity generation, is a stumbling block.
For article GO HERE
Posted by seemorerocks at 11:17