Again, after the Federal Reserve announced its latest round of QE ("Operation Twist") and with panic in Europe the markets have crashed again.


There is lots of coverage - but here's what Business Insider and the Guardian have to say about the day's events.

MARKETS DESTROYED AROUND THE WORLD: Here's What You Need To Know 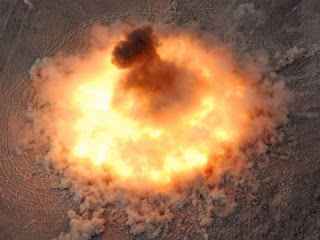 Business Insider
22 September, 2011
Obliteration!
But first, the scoreboard:
Dow: -387.37
NASDAQ: -79.69
S&P 500: -36.19
And now, the top stories:
• The "day" really started yesterday around 2:20 when the FOMC released its highly anticipated "Operation Twist" announcement. Markets were already down modestly heading into that, but the selloff got serious after that, and stocks really fell out of bed. To some extent, the selling was a "sell-the-new" kind of thing, and perhaps to some extent some were disappointed that Bernanke didn't go further. Alongside the announcement, yields on long-term Treasuries plunged through the floor.
• Not long after the market closed, more bad news from Washington came: The House voted down a continuing to keep the government open. A government shutdown is a real possibility.
• That selling carried through. Asia got smoked across the board last night. Hong Kong fell 4.8%. Korea fell another 2.9%. What's more, Chinese flash PMI came in weak, confirming slowdown fears there.
• But the real pain was in Europe, where French banks continue to be at the center of the show. They got demolished on all kinds of ugly headlines, like Mohamed El-Erian talking about a huge run on them (in an FT piece) and a story BNP Paribas going to the Mideast looking for fresh cash. This of course lead to selling in everything else, and all the major indices got destroyed. Clearly the crisis is not a "Greek" crisis anymore. The banking system has been infected.
Europe, too, clocked in with a bad PMI report. The slowdown is real.
• And the follow through continued in the US. Dow futures were already pointing to a loss of about 200 points when at 8:30 AM we got (yet) another disappointing initial claims report. Later at 10:00AM, we did actually get a surprisingly good reading from the FHFA home price index, but nobody cared.
• Markets trashed everything and everyone all day. Stocks got clobbered (never mounting anything resembling a comeback), commodities got destroyed, gold got smashed, oil fell below $80, and the Swiss Franc continued to cede its supersafehaven status. Only the yen, the dollar, and US Treasuries (where yields continue to plumb fresh lows) turned in positive/respective showings. BTW: If gold investors are bummed about the 4% decline today, silver investors, who lost over 8% should be annoyed.
• There wasn't much mitigating on the corporate front today. FedEx, the ultimate economic bellwether, warned about next quarter's earnings. Bank of America fell because, well, it's Bank of America. Morgan Stanley got really hit on concerns over its French bank exposure. From the tech world, reports seemed to confirm that Meg Whitman will be the next CEO of Hewlett-Packard once it gets around to firing to actually firing the current CEO, Leo Apotheker.
Stock markets tumble after Operation Twist … and doubt
US Federal Reserve strategy to calm financial markets causes investor fright as markets from London to Asia plunge 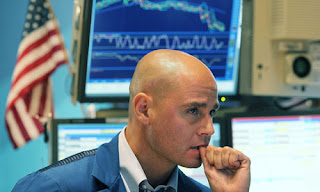 the Guardian,
Thursday 22 September 2011 10.25 BST
Stock markets tumbled on Thursday and the pound slumped to a one-year low against the US dollar as investors took fright at a gloomy warning about the world economic outlook from the US central bank.


The US Federal Reserve's Operation Twist – its latest attempt to stimulate the American economy – failed to calm financial markets. The FTSE 100 index in London plunged 266 points to 5022, a 5% drop. Other European markets also suffered heavy losses.


The sell-off came after the Fed unveiled a $400bn (£260bn) bond-buying plan on Wednesday to ward off a double-dip recession.


The City had been "left reeling" by the sharply negative tone adopted by the Fed on Wednesday night, when it warned that the US economic recovery was at risk, said Joshua Raymond, chief market strategist at City Index.


"The negative tone struck by the Fed in terms of the serious headwinds and downside risks facing the US economy sent a ripple through the markets," said Raymond.


In Europe, the European Central Bank came under pressure to take action itself after a worsening in the services and manufacturing sectors sparked warnings that the economic recovery was definitely over. This was exacerbated by news that industrial orders in the eurozone slid for the second month in a row in July.
Federal Reserve gloom


The Fed's open markets committee said the economic outlook had deteriorated sharply, noting there were "significant downside risks" to its economic forecasts and indicating that a full recovery was years away. "Recent indicators point to continuing weakness in overall labour market conditions, and the unemployment rate remains elevated," it said.


This drove the Dow Jones down 2.5% on Wednesday, while the Standard & Poor's 500 index lost 3%. The dollar hit a seven-month high on Thursday as investors scrambled for safety.


Commodities tumbled on news that Chinese factory output had shrunk for a third month in September as flagging overseas demand put the brakes on new orders. Brent crude oil lost more than $2 to $107.50 a barrel, while US crude dropped $3 to $82.92 a barrel. Copper lost 3.3% on the London Metal Exchange, falling to a 10-month low of $8,028.75 a tonne.
"It is another blow after the Fed's language about downside risks on the economy really hurt sentiment," David Thurtell of Citigroup in Singapore told Reuters.


The Fed's move came on same day that the Bank of England was also getting ready to pump more money into the British economy.
Double twist


"Operation Twist", named after a similar measure launched in the 1960s under President Kennedy, will see the Fed buying $400bn (£258bn) of long-term Treasury bonds by June 2012 and selling shorter-term debts. The measure is aimed at driving down long-term interest rates across the economy, in an attempt to reduce the cost of borrowing for indebted homeowners and struggling firms.


In another effort to help the ailing US housing market, the Fed chairman, Ben Bernanke, said that as the mortgage-backed securities it owns matured, it would reinvest the proceeds in buying new mortgage bonds. Economists called the measures a "double twist".


Gary Jenkins, head of fixed income at Evolution Securities, said: "Twist and doubt? You have to hand it to the Fed. They have gone all retro on us and persuaded the market to call their latest attempt at intervention 'Operation Twist' rather than 'QE 3'. The latter might imply that the first two attempts didn't quite work out as hoped so far better to change the name."


He added: "The basic idea is of course to stimulate economic growth by persuading investors into risk assets … the one thing that is clear is that Mr Bernanke is prepared to use all the weapons in his armoury in order to try and ensure that the US does not enter a long period of low growth, so Operation Twist may not be the last intervention unless it works. And of course the UK is about to follow suit."


Paul Ashworth, chief US economist at Capital Economics, was not convinced Operation Twist would do much good. "The big question is whether this latest action will accomplish anything. We doubt it. Judging by the modest rally in 10-year treasury yields since the announcement, most of this was already priced in.


"More generally, the cost of borrowing simply isn't the problem. Businesses don't have the confidence to invest and half of all mortgage borrowers don't have the home equity needed to refinance at lower rates."

Huffington Post
22 September, 2011
Moody's Corp on Wednesday cut the debt ratings of Bank of America Corp, Wells Fargo & Co and Citigroup Inc, three of the largest U.S. banks, on worries the government would be less likely to support a large lender if it got into trouble.
For article GO HERE
Posted by seemorerocks at 10:43