Italian Bank Execs Worry About Contagion From A Greek Default 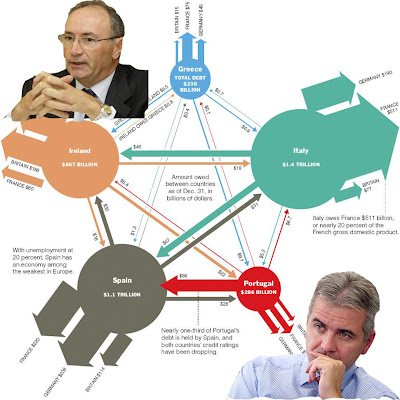 To get this illustration full size GO TO

Italy pays record high rates at debt sale
(Reuters) - Italy paid the highest yield on a 10-year bond since the introduction of the euro at an auction on Thursday, the first long-term sale since Standard and Poor's cut the country's sovereign ratings.
Reuters
Italy's funding costs remain under pressure despite a pick-up in risk appetite driven by expectations of a stronger euro zone rescue fund as analysts said the government's tentative reaction to the debt crisis had damaged investors' confidence.
Although paying a high price, Italy managed to sell 7.86 billion euros of long-term bonds, reassuring markets on its funding abilities and moving closer to an overall issuance target of 430 billion euros for the current year.
The 10-year yield rose to 5.86 percent at the auction, up from 5.22 percent a month ago. The bid-to-cover ratio was 1.374 compared to 1.269 in August.
"That's eye-watering yield levels" for the 10-year bond, said David Schnautz, a rate strategist at Commerzbank.
He said the yields were not yet at a level where they challenged the sustainability of Italy's 1.9 trillion euro debt pile, but added: "Obviously it's not a comfortable level on a sustained basis. Despite ECB intervention for more than one month Italy is still printing at these levels to get the paper out of the way."
The European Central Bank started buying Italian and Spanish bonds at the beginning of August in a bid to protect the bloc's third- and fourth-largest economies from a spreading debt crisis. But the purchases have failed to put a lasting lid on borrowing costs.
Market pressure has eased somewhat over the last few days,
but at 366 basis points the spread between 10-year Italian BTPs and German Bunds is not far from the record high of 416 basis points it hit at the height of the crisis.
Rome paid the most in three years at a short-term auction on Tuesday, the first debt sale since S&P cut Italy's ratings by one notch on September 20 citing poor growth prospects and damaging political uncertainty.
Italy has benefited less than other euro zone peripheral peers such as Spain from improved risk sentiment as its fractious government is widely seen as too weak to push through unpopular reforms to boost the country's anemic growth rates.
($1 = 0.733 Euros)
Posted by seemorerocks at 18:09