We’re In A Global Recession: Why This Crash Should Have Come Sooner 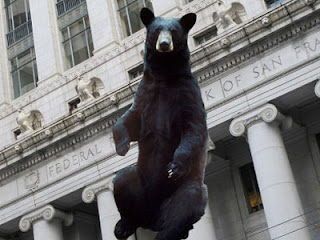 Business Insider,
23 September, 2011
A confession: I’m too excited, nervous, and agitated to start this post cleverly, so let's just get to the economic heart of things.
As anyone with a financial pulse knows, yesterday specifically and this week generally marks, well, the beginning of the end.  The end of geo-political economic optimism, hope, and confidence. And, at least for me, this moment could not have come soon enough.
Bloomberg outlines the financial carnage in Global Stocks Drop 20% Into Bear Market as Debt Crisis Outweighs Profits: “Stocks fell, pushing the MSCI All- Country World Index of 45 nations into a bear market for the first time in more than two years, after the worsening European debt crisis and threat of a U.S. recession erased more than $10 trillion from equities since May.”
Well, financial world, welcome to the show. Those of us who have been paying attention have been not-so-patiently waiting for you.
What, I may ask, took you so long?
As the economic world now turns its worried eye to the “traditional” financial experts, commentators, and reporters, those of us who saw this coming from a financial mile away feel the need to take you all to task. Honestly, financial markets, what the f#ck did you think was going to happen this year?  Not just this year, but throughout the past 3; you know, since 2008, when this global recession really started? Who and/or what did you think was going to spark any kind of growth to get us out of this financial disaster?  You HAVE read at least one basic primer on economics, right?
Let’s take a look at this from a rational, non-system approach (you know, one that actually understand the intersection of policy, economics, and finance): between the past 10 to 30 years (depending on which country/region you’re looking at), both the United States and Europe enjoyed tremendous debt-fueled growth, which inevitably led to unprecedented economic development and prosperity in the developed world.  And while this debt-fueled growth created a modern-day financial fairytale, it masked underlying fissures within the1st world debt infrastructure that continued to grow even as world headlines breathlessly touted “Economic Sunshine And Lollipops For All!”  These fissures have since split permanently, taking with them much of the debt-fueled growth of previous decades. In short, we’re all screwed.
Where my intellectual frustration lies, however, is in how LONG it’s taken the financial powers-that-be to understand and react to the fundamentals driving this past week’s crash.  While it’s all well-and-good that Pimco’s Mohamed El-Erian now warns the world of an impending “double-dip” recession, I’d argue we’ve been, with a few financial exceptions and explanations, in a recession since 2008.  Sure, the markets have exhibited fits and starts of growth and development, but ultimately, the world economy has, at least for now, semi-permanently contracted, starting with the initial shrinkage that really started in 2008.
In short, the financial world – with its inherent optimism, ignorance, and intellectual blindness - has screwed us again.  By failing to understand that governments and policy-makers have only so many economic magic bullets (side-note: interesting how desperate Wall Street – that bastion of “Hands Off My Pocketbook!” – now seems in begging and pleading Daddy Government to rescue it from its own mistakes), players in the financial markets have driven us deeper into this not-impending-anymore! global recession.  By failing to acknowledge the obvious – there’s only so much growth that comes from debt and, well, bill-callers eventually always come calling – the world’s financial-powers-that-be have continued spending, investing, and trading as if something – anything! – could and would come along at any financial moment and rescue us from our own sloth and greed.  All this week’s market meltdown showed us is, really, is what’s been true all along: we’re economically screwed.  And will be for years to come.
And, of course, a final note to the markets: my predictive voice may be hoarse, tired, and worn-out, but here goes again.  GREECE IS SET TO DEFAULT.  There are NO economic bullets in the European Union’s policy-making gun that can make up for the math of this debt-issue.  Even more interestingly?  It’s possible, and likely, that Ireland will start calling the EU to task about the strict terms of the Irish plan, post-Greek default.  The European Union will, most likely, splinter, re-form, and take on a newer, more-efficient financial face.
But then again, you guys DO know best…right?
Posted by seemorerocks at 10:24