The Eurozone crisis continues to deepen 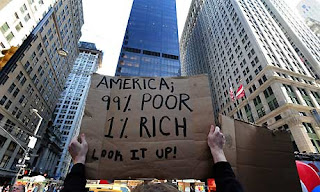 
The International Monetary Fund warned on Tuesday that the United States and the eurozone risk being plunged back into recession unless policymakers tackle the problems facing the world's two biggest economic forces.
In its half-yearly health check, the Washington-based fund said the global economy was "in a dangerous place" and that its forecast of a slow, bumpy recovery would be jeopardised by a deepening of Europe's sovereign debt crisis or over-hasty attempts to rein in America's budget deficit.
"Global activity has weakened and become more uneven, confidence has fallen sharply recently, and downside risks are growing," the IMF said as it cut its global growth forecast for both 2011 and 2012.
For article GO HERE
IMF cuts UK growth forecast to 1.1% and questions pace of cuts
George Osborne warned that slower pace of deficit reduction will have to be adopted if economy continues to struggle 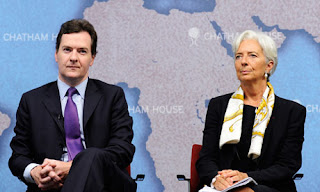 The International Monetary Fund has cut its growth forecast for Britain for the third time in nine months and warned George Osborne that further underperformance would warrant a policy U-turn.
The fund said the UK continued to struggle and advised that a slower pace of deficit reduction would be necessary were the economy to continue to expand less rapidly than expected
For article GO HERE
The Most Stunning Part Of S&P's Downgrade Of Italy

Business Insider
20 September, 2011
The most stunning part of S&P's downgrade of Italy was this part:
More subdued external demand, government austerity measures, and upward pressure on funding costs in both the public and private sectors will, in our opinion, likely result in weaker growth for the Italian economy compared with our May 2011 base-case expectations, when we revised the outlook to negative.
Let that sink in: S&P is blaming the downgrade (in part) on government austerity measures because they've negatively impacted growth.


You'd think that that one acknowledgment should overturn all of the conventional wisdom about deficit cutting— that it can't be achieved through cutting spending, especially since S&P are the kings of conventional deficit wisdom.
And furthermore, you have to think of all the S&P-induced austerity that has arisen (even in the US, somewhat), as countries specifically try to avoid further ratings actions, only to dig themselves further into the hole.


This is not a trivial point, since government debt is arguably the biggest issue of the day around the world. S&P just admitted that spending cuts make debt service harder.
For article GO HERE
FROM RT

Eurozone crisis could push Britain back over the edge, Cable warns
The Independant
20 September, 2011
Britain could be hit by a second financial crisis or face years of stagnation similar to that suffered by Japan, the Business Secretary Vince Cable warned last night as he painted a grim picture of the nation's economic health.
He told The Independent fringe meeting that the ingredients were still in place for an economic "perfect storm".
Dr Cable admitted the gloomiest scenario is that Britain could plunge into a new financial crisis prompted by the collapse of the Greek and other eurozone economies. He also warned that Britain could suffer years of weak growth similar to the stagnation endured by Japan in the 1990s.
For article GO HERE
Lenders press Greece to shrink state and avoid default 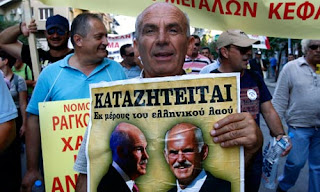 (Reuters) - International lenders told Greece on Monday it must shrink its public sector to avoid running out of money within weeks, as investors spooked by political setbacks in Europe dumped risky euro zone assets.
Adding to concerns, Standard & Poor's cut its ratings on Italy in a major surprise that threatens to stoke fears of contagion in the debt-stressed euro zone.
Greece is near a deal to continue receiving bailout funds, a Greek finance ministry official said after a conference call with lenders, though "some work still needs to be done."
U.S. stocks recovered some of their losses on the news.
For articel GO HERE
Posted by seemorerocks at 10:16