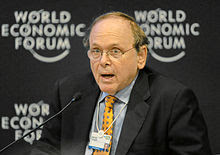 Clusterfuck Nation
This much can be stated categorically about the USA these days: the more distressed our economy gets, the more delusional thinking you will encounter. People want to assign the cause of their misery to this or that (socialism, abortion, Jews, the New World Order). People want to believe that their world is a safe place with bright prospects (climate change is a myth, we have a hundred years of shale oil). The realm of oil is especially ripe for misunderstanding, since we depend on the stuff so desperately, and the world's geology is complex indeed, and then you have to bring math and money into the picture. But it's another thing when professional propagandists take the stage and attempt to systematically mislead the public.
Such is the case with two ersatz bombshells zinging across the web-waves this past week, fired off by two of the foremost professional liars on the scene. The first comes from the oil industry's leading prostitute, Daniel Yergin of Cambridge Energy Research Associates (CERA), owned by the mammoth HIS consulting company. CERA is the main public relations shop for the oil industry. Its mission is to blow smoke up America's ass in order to keep investment dollars flowing into oil companies because oil companies prefer to use other people's money to perform their risky operations. They make a lot of money themselves, and accumulate it diligently, but they are not so foolish as to squander it on dry holes and adventures in alchemy.
So, last week Daniel Yergin came out with a blast in the Wall Street Journal affecting to debunk peak oil. His own theory is much like Irving Fisher's economic theory set out October 21, 1929 that "stock prices have reached what looks like a permanently high plateau."  Three days later, the markets crashed and the Great Depression commenced. Yergin says we've hit a permanent plateau for oil production. He is pimping for a bonanza in shale oil, tar sands, and other innovative ventures in picking "fruit" that is not hanging so low anymore. He says:
"Meeting future demand will require innovation, investment and the development of more challenging resources. A major reason for continuing growth in petroleum supplies is that oil previously regarded as inaccessible or uneconomical is now part of the mix, such as the "presalt" resources off the coast of Brazil, the vast oil sands of Canada, and the oil locked in shale and other rocks in the U.S."
Spoken like a true PR whore. Translation: give us money. Calling all investors. Give your dollars to the folks working the Bakken play, or Eagle Ford down in Texas. These shale plays represent oil that is trapped in "tight," low-permeability rock that has to undergo fracturing operations ("fracking") before you can drain it out. It costs a lot more to get oil this way than by sticking a pipe in the ground and running a pump-jack to get it out the old-fashioned way. There are more than a few dirty secrets about the shale oil plays, but the biggest one is that you have to throw a huge amount of capital and steel at it to keep it running as an ongoing enterprise, and that money - other people's money - will be in shockingly short supply in the years head.
Those troubles distant rumblings you hear in places like Greece, Portugal, Italy, Spain - that's the sound of the world's money whooshing into a black hole, which is what happens when debts are not repaid. Something very similar is happening in the USA, where all the unresolved mega-borrowing of the past thirty years is whirling down the drain, never to be seen again, and a craven corporate oligarchy (there, I said it) is working tirelessly to hoard the last remaining vestiges of money before it either deflates across that event horizon, or inflates away to nothing by digital multiplication. In either case the result is the same: you're broke.
Here's the truth about the US shale plays: they will never amount to more than about one million barrels-a-day (m/b/d) in production under any circumstances (the nation uses 19 m/b/d); and even more probably the money will not be there to keep the shale oil coming very many years into the future. You can take that to the bank (if your money has any value when you get there, and if the bank has not cratered).
In our fugue of techno-narcissism, America wants to believe that we can just keep on being what we used to be, pizza, DisneyWorld, WalMart, and all. So, the second big buzz of the week came courtesy of Goldman Sachs, in a sloppy press release saying America would be the world's top oil producer in 2017, at 10.9 m/b/d. The effrontery of these thieving pricks!


They apparently pulled the information out of chief Goldman flak Lucas Van Praag's ass. One might infer that Goldman Sachs is campaigning to raise money for the oil industry by suggesting a bonanza is underway. It's a crude ruse. The actual "confidential" report - as opposed to the brief summary in the media - shows that Goldman Sachs arrives at this position by referring to non-oil substances as oil. Neat trick. Be sure to call Goldman Sachs to invest your remaining savings in algae secretions and ethanol.
No doubt, though, that these two PR offensives will accomplish their secondary mission: to gird the hopes and wishes of the political right-wing, who are hell-bent on keeping this country from entering a plausible future. Watch these idea take flight and wonder that you live in such credulous nation.
Posted by seemorerocks at 12:21