Trouble spreads in the Middle East 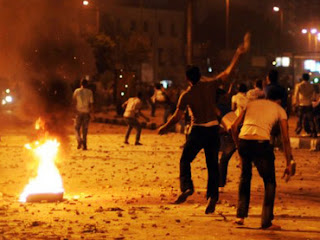 RT
15 September, 2011, 16:14
The Israeli ambassador and almost all staff have been evacuated from the country’s embassy in the Jordanian capital, Amman, amid growing fears of an assault on the mission similar to last week’s attack in Egypt.
Fears of violent anti-Israel protests similar to those that erupted in Cairo were sparked following calls for a “million-man march” outside Israel’s embassy in Amman.
The action, scheduled for Thursday, had been organized via Facebook. The motto, “No Zionist embassy on Jordanian territory” was published online earlier this week and has already attracted thousands of pledges to attend the demonstration.
The Jordanian protesters, reportedly led by leftists, labor unions and Islamists, were expected to start gathering near the embassy by 1400 GMT. Their demands include the embassy's closure, expulsion of the ambassador from Jordan and the annulment of the 1994 peace treaty with Israel.
Routine diplomatic protocol stipulates that in ordinary situations all employees should return to Israel every weekend, with the exception of one diplomatic representative and a security team, the Haaretz newspaper reported.
But in the light of growing fears of an escalation of anti-Israeli violence and plans for a demonstration in front of the Amman embassy, Benjamin Netanyahu ordered that the diplomats be brought home a day ahead of schedule.
The move comes against a backdrop of tension ahead of the expected bid for UN recognition of Palestinian statehood. Nearly half of Jordan's six million residents are of Palestinian descent.
There is also growing friction with Turkey, which recalled its ambassador to Israel after the Jewish state refused to apologize for killing nine Turks in a military raid on a Gaza-bound aid flotilla last year.
Last weekend, protesters stormed Israel's embassy in Cairo in a 13-hour rampage that prompted the evacuation of nearly all Israeli diplomats from Egypt.
Israel will decide on Saturday whether its Amman diplomats will return to Jordan on Sunday as usual, Al-Jazeera newspaper reported, citing diplomatic sources.
Posted by seemorerocks at 18:08