The NZ media looks at the European situation - at last!

Euro dithering sends sell signal for world shares
Today’s nonsense comes from the New Zealand Herald.  Quite what solution they see to the crisis I can’t quite see.
Do they imagine that if the Greeks take their medicine they are going to be able to pay back their debt?  Along with Spain, Portugal, Ireland, Italy, the UK, the USA and just about every other country.
Growth is dead. 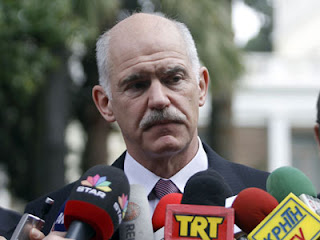 New Zealand Herald,
20 September, 2011
Equities on both sides of the Atlantic slumped as the inability of European Union leaders to find a solution for the Greek fiscal crisis has investors throwing in the towel and running for cover.
International lenders will review whether Prime Minister George Papandreou can satisfy the conditions of the country's rescue loans. The Greek leader cancelled a US visit that was to begin on the weekend.
Today, EU and International Monetary Fund inspectors held a teleconference with Greek Finance Minister Evangelos Venizelos to assess whether the government is eligible for an aid payment of 8 billion euros due in October.
Investors have all but given up hope that Greece will avoid a default.
"My analogy on the euro zone is we're playing a massive game of Whac-A-Mole. No one has any idea of what the resolution is," Phil Orlando, chief equity market strategist at Federated Investors in New York, told Reuters.
"The bigger problem is it doesn't appear to me at least that the Greek people have the appetite to follow through on the austerity measures."
In late trading in New York, the Dow Jones Industrial Average dropped 1.32 per cent, the Standard & Poor's 500 Index shed 1.34 per cent and the Nasdaq Composite Index fell 0.81 per cent.
In Europe, the benchmark Stoxx 600 Index ended the day with a 2.3 per cent drop.
The euro was hit, too, as the currency last traded 1.2 per cent weaker at US$1.3634. The euro was likely to test last week's seven-month low of US$1.3495 again soon, traders told Reuters.
Underpinning a fiscal crisis in the US was President Barack Obama's US$3 trillion plan to lower US deficits by raising taxes on the rich.
The proposal failed, not surprisingly, to draw support from Republicans who labelled it a political stunt with little chance of becoming law. Obama made it clear though that he won't sign any bill to cut the deficit unless it contains tax increases.
Meanwhile, Federal Reserve policy makers are gearing up to debate the world's largest economy at a two-day meeting beginning Tuesday.
Amid the turmoil investors sought the relative safety of US Treasuries. Yields on 10-year notes dropped 12 basis points to 1.93 per cent at 1.58pm in New York, according to Bloomberg Bond Trader prices.
"Policy makers are unable or unwilling to do anything," David Ader, head of US government bond strategy at CRT Capital Group LLC in Stamford, Connecticut, referring to European officials, told Bloomberg News. "That is why people are buying two-year notes at 15 basis points even when they know the risk is we're going to see the Fed in here selling them."
Even gold, typically a safe-haven, fell, with gold futures for December delivery shedding 2.2 per cent to US$1,774.70 an ounce on the Comex in New York.
Others remain optimistic about the precious metal. Gold may climb 21 per cent to a record US$2,200 an ounce by the end of 2011, Tony Hall, the London-based chief investment officer of Duet Commodities Fund Ltd., told Bloomberg.
Posted by seemorerocks at 09:46