Prepare, hunker down and keep small

Michael Ruppert in his latest video alert has talked about events happening at great speed - and in concert.  In the United States we are coming to the date when the Super Comittee has to make decisions on cutbacks to spending; FEMA has run out of funds to cope with present weather disasters and now a government shutdown is imminent because Congress is on holiday as are parliaments in Europe.
There is a definite sense that the elite have known of Peak OIl for years and recongnise what is happening and the economy is being shut down.
We should be ready for major changes.
Mike Ruppert is warning that what is coming in the coming weeks is essentially the introduction of the New World Order.
He is suggesting that peopele prepare, hunker down and stay close to home.
None of us know out this is going to play out and whether thigns are coming to a head but watching the news every day I would have to concur that something very serious is happening.
Senate Has Enough Votes To Defeat Continuing Resolution: Government Shutdown Imminent

Zero Hedge
23 September, 2011
As predicted:
• SENATE HAS VOTES TO DEFEAT HOUSE SPENDING PLAN; VOTE CONTINUES - BBG
Next up: headline risk and a push for Bernanke to print more. Why? Because when all is said and done the market will have plunged (even more) on the realization there is no fiscal stimulus coming in the next two years, despite the Chairman's clever gambit.
From Reuters:
"With aid to victims of natural disasters running out, the Democratic-controlled U.S. Senate on Friday rejected a broad spending bill that had passed the Republican-controlled House of Representatives hours earlier.
As voting continued on the measure, Democrats had rounded up enough votes to defeat the bill, which would replenish dwindling disaster-aid funds and ensure the government can continue to operate past Sept. 30, the end of the fiscal year."
and from the Guardian -
US spending bill defeated in Senate
Senate majority leader Harry Reid says bill, which was passed in the House of Represenatives, does not provide enough aid relief 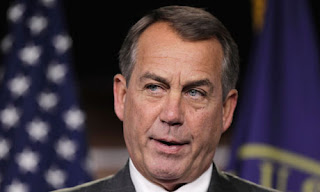 the Guardian
24 September, 2011
A US government shutdown remains a possibility after the US Senate rejected a stop-gap spending bill that had passed the Republican-controlled House of Representatives hours earlier.
As voting continued on the measure, Democrats had rounded up enough votes to defeat the bill, which they said did not contain sufficient aid for victims of natural disasters.
Senate majority leader Harry Reid earlier said he planned to discuss with Senate Republican leader Mitch McConnell how to craft a bill that could be more palatable to Democrats.
Congress is up against a 30 September deadline, when the fiscal year ends and government money runs out.
Adding to the urgency, aid for American victims of tornadoes, wildfires and other disasters could dry up by Monday if Congress does not replenish a dwindling relief fund. Funding for everything from national parks to law enforcement could expire in a week.
Even in the face of rock-bottom approval ratings of Congress, the dispute saw lawmakers struggling to bridge their differences to pass even the most essential legislation.
By a largely party-line vote of 219 to 203, the House approved a bill that would keep the government running through 18 November and provide $3.65bn for disaster relief in one of the most extreme years for weather in US history.
On Thursday, Reid said of the bill: "It fails to provide the relief that our fellow Americans need as they struggle to rebuild their lives in the wake of floods, wildfires and hurricanes. It will be rejected by the Senate."
House Republican leaders had to quickly rewrite the bill after an earlier defeat in order to minimise defections from lawmakers aligned with the conservative Tea Party movement.
Democrats overwhelmingly opposed the bill on the grounds that disaster aid was inadequate. They said a $1.5bn cut to an electric-vehicle programme, included to partially offset the increased disaster aid, would kill some jobs in hard-hit states like Michigan.
The No2 House Republican, Eric Cantor, brushed off Reid's threat and said the House intended to adjourn for a week-long break on Friday.
"I guess Harry Reid will have to bear the burden of denying the disaster victims the money that they need," Cantor told reporters.
House speaker John Boehner said the dispute would not lead to a government shutdown. Congress has more than a week to resolve its differences, and every spending debate this year has gone down to the wire.
Boehner and other Republican leaders have promised to lower the temperature on Capitol Hill after fierce budget battles with Democrats pushed the government to the brink of a shutdown in April and the edge of default in August.
The months of turmoil in Washington have spooked consumers, rattled investors and led to a cut in the country's top-notch AAA credit rating.
Republican leaders have struggled at times to rein in a Tea Party faction that has shown no appetite for compromise, even as a special bipartisan committee searches for hundreds of billions in budget savings that will likely require painful sacrifices for Republicans and Democrats alike.
At a behind-closed-doors meeting on Thursday, Boehner said that the stubbornness of those Republicans unwilling to compromise would weaken their party's bargaining position with the Senate.
That was evidently enough to convince 24 Republicans to change their position.
The revived bill included one tweak: it killed a $100m dollar loan for Solyndra, the failed solar-panel maker that has drawn scrutiny for its ties to the Obama administration. That would have little practical effect, as the company has already declared bankruptcy and the loan programme is set to expire next week.
Posted by seemorerocks at 19:06