A warning for those concerned about food freedoms

Canada: Urban farmer digs in over Lantzville ban
A slightly older story but a warning for us in New Zealand as we face the Food Bill being passed into law. 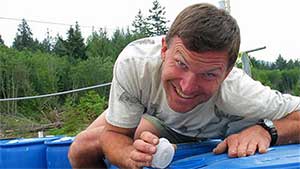 CBC News,
29 July, 2011
A Vancouver Island farmer is fighting a bylaw that prevents him from selling the produce he grows on his residential property, saying farming should be unrestricted by laws.
The District of Lantzville, located just north of Nanaimo, has threatened Dirk Becker with legal action unless he applies for a temporary use permit to farm. But Becker has refused, saying farming should be a right.
Becker has been battling the district since last November, after a neighbour complained Becker was growing produce on his one-hectare residential lot, and selling it at a local farmers market which he founded several years ago.
Becker, who also markets himself as a public speaker for social change, is an outspoken proponent for local and organic food production and sustainability.
The district is working on a new bylaw that would allow for-profit farming on residential property, but in the meantime it's sent Becker a letter, threatening to take him to court unless he applies for a temporary permit.
But Becker is refusing and has called on the district to withdraw its threat of legal action.
"It's not operating in good faith that they're saying 'We're changing the bylaw, but we're going to prosecute you under the old bylaw,'" said Becker.
He also wants the district to create a committee to review the proposed bylaw, which he says would still prevent him from growing enough food to make his business viable.
Public support growing says Becker
Becker says two independent organizations have been created which agree with his point of view, and 500 letters of support have been received by the council.
"So what's happened is more and more people have come to the realization that what Nicole and I are doing is very important and needs to not only be allowed, but appreciated and encouraged and protected and facilitated," he said.
Lantzville Mayor Colin Halme was not available for comment, but in a statement posted on the District of Lantzville website in March, the mayor said the district was not opposed to urban farming but that it needs to develop policies that worked for everyone.
"Although council has been receiving a variety of communications on the numerous benefits of local food production, there have also been concerns expressed as it relates to the increase of traffic, odour (stemming from the organic materials used in these instances), importation of foreign materials, potential contaminants, potential well contamination, water use and pests," said the statement.
"Further, the question has been raised as to why intensive agricultural activities should be allowed within residential areas when there is significant agriculturally zoned properties that are not currently being used for agricultural activities," said the statement.
Posted by seemorerocks at 21:54