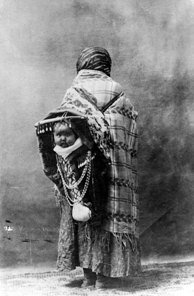 Several Native American tribes tell a story about an old woman who wanders the roads of life with her grandson. For unexplained reasons, they are poor and hungry, caught in the winds of fate without food and shelter. They arrive at a village where people are busy with preparations for a great feast. The old grandmother knocks on doors and asks for food for herself and her grandson. Despite the evident abundance, they are refused entrance. She is rebuked for interfering with the big feast and for distracting people from their tasks and efforts.
The old woman and child trudge along and enter a poor village where people barely have food to eat. Despite, and because, of the poverty there, they are invited to share in a communal soup that is mostly water. The old woman commends the people for inviting them to the table and adds some crystals from her pocket to the soup. Surprisingly, the thin gruel takes on a rich flavor that satisfies everyone.
The old woman explained that the crystals are salt from the earth, something necessary for survival, but also able to bring out the flavor of life. She showed the people where to gather salt and taught them a ritual for making peace with each other. They say that is how it came to be that salt is commonly used and why the elders are considered to be the “salt of the earth.”
A story like this persists because it has many levels of meaning. On one level, it reminds people that hunger and poverty can happen to anyone, young or old. It also depicts a common human fault wherein those who have more than they need often feel too busy and self-satisfied to give to those in greater need. Meanwhile, those who understand the effects of poverty and loss often feel compelled to share what little they have.
Thus, a deeper kind of poverty becomes revealed. Those unwilling to share with others in times of need display a spiritual poverty that overvalues material possessions while conveniently undervaluing the sufferings of those less fortunate.
The point here isn’t simply moralistic; but more that life ceases to flow and can lose its flavor when people simply hold onto what they have received. A great feast can be bland and can fail to satisfy one’s genuine hunger for a taste of the essence of life.


For life to have real flavor, something salty and genuine is needed. Salt is whatever can cut through the false pretenses and superficial levels in order to bring out the deeper feelings and essential elements that make the shared experiences of life meaningful, satisfying and memorable.
The story of salt tends to be told when people are fiercely at odds and worried about survival. The old salt woman represents those who are the “salt of the earth,” the ones with enough heart to protect and care for others, especially the young. She represents the elders who are supposed to add the salt of experience and wisdom to the daily soup of existence. For the elders know the danger of allowing the disparity between the village of the “haves” and the village of the “have-nots” to grow too great.
Modern disparity studies show that too great a gulf between the rich and the poor contributes to the overall of anxiety in a culture. Excessive disparity also increases the rates of serious illness and surprisingly does so at all economic levels of a culture. At some level we are all in the same soup. Those who refuse to understand this tend to lose the real flavor of life even if they rise to the top or win some elections.
Too great a divide between those more fortunate and those less wealthy specifically endangers the children. The new report on poverty in America shows more and more people falling into hunger with the greatest increase in poverty found amongst children. While people argue over issues of national security and the viability of social security, the basic levels of cultural insecurity are growing and the most vulnerable are increasingly being refused entrance to the feast of life.
Something has gone very wrong when those old enough to know better wind up cheering for the misfortune of others and voting for abstract ideas that lack an understanding of human suffering as well as the salt of wisdom. The elders are supposed to be “worth their salt.” They are supposed to be able to add the salt of wisdom to the soup of civilization. And, they are supposed to recognize the essential vulnerability of all children as well as the need for meaningful opportunities for all young people.
It is no accident that the one who holds and protects vulnerable children and helps bring people together is an older woman. Traditional cultures often had meaningful roles for women beyond the age of child-rearing. The original meaning of grandparent goes far beyond the simple sense of a biological predecessor or the issues of a family inheritance. The grand mother imagined and worked for the well being of all the children and she had enough salt to speak truth to power.
Grandparents become truly grand, not by simply having grandchildren, but by learning to see the inner grandness in each child. Grandparents are those who take on the responsibility for sustaining the grandness of the dream of life. Someone old enough to become a grandparent should be wise enough to see the big picture; and the big picture always involves more than simple survival, just as the deepest problems we face are never simply economic.
Those who trade in politics and economics often become caught in short-term solutions and self-preserving strategies. However, the old notion of the elders did not involve an elected position; rather it is a soulful condition that can bypass local politics as well as national pretenses in order to preserve life and dignity for the greatest number of people.
Sometimes “it’s the economy, stupid” and sometimes it is stupid and foolish and cowardly to pretend that the economy is all that matters. More and more children are growing up in the village of hunger and poverty; more and more young people cannot find a job, much less a career opportunity.
Those aren’t signs of an economic downturn; they are indications of a loss of grandness and a failure of human courage. While people argue about which faction gets how much of the national pie, the grandness of the underlying dream of America becomes increasingly tarnished and diminished.
In the end, we are each others’ security. The bigger question may be whether or not the grandmothers and grandfathers of the current generation can find enough salt to insist that human decency and honest compassion be exercised for the benefit of all before the next round of uninspired political fighting occurs? In the end, a culture is not measured by its gross national product, but by the way it treats those who are most vulnerable and most in need.
Posted by seemorerocks at 11:47