I thought that these comments from Michael Ruppert summed up the current situation very well -
“I look at the economic stories out of Europe today and they are all so... vacuous. They say little except that, behind the scenes, the book cooking and the corralling of financial players continues.
Rumors are still driving rallies while all of the un-addressed fundamentals remain as un-fixable as ever. It will never be possible to achieve enough growth to repay these astronomical debts.
Today's stories are back to focusing on seedling trees while missing the enormity of the forest. This is all being dragged out over the short term. "Until what or when?", you ask.
I don't know.
But everything that is happening continues to tie as many elements of the European and global economies together, making sure that Japan, the BRICs, the U.S. and even China are sitting in the same sinking boat.
For now, all we can do is watch and not get too caught up in the minutia because they reveal little that can be called truth”. -- MCR
Merkel pushes through rescue package in step towards tackling the eurozone's sprawling debt crisis 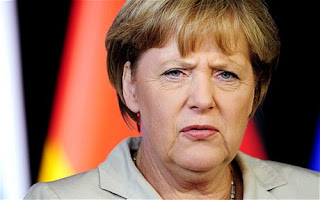 the Guardian
29 September, 2011
Angela Merkel has successfully corralled her government into voting for the revamped euro bailout fund, asserting her authority as chancellor by pushing through the bill without needing to rely on opposition help.
Of 611 MPs present in a highly-charged sitting at the Bundestag on Thursday morning, 523 voted in favour of expanding the powers of the European Financial Stability Facility (EFSF).
Under the plan, the EFSF will be enlarged to €440bn (£382bn). It will also be given the ability to give "precautionary loans" to struggling European countries, buy EU government debt, and provide funding to shore up the capital reserves of European banks.
The result was a triumph for Germany's shaky coalition government and marked a major step towards tackling the eurozone's sprawling sovereign debt crisis. Some analysts, though, argue that more radical measures will be needed.
For article GO HERE
Posted by seemorerocks at 11:01