Think that China is immune to economic breakdown? 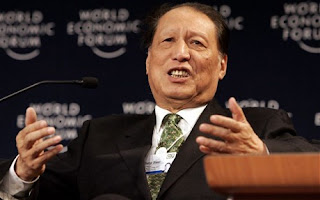 Monetary tightening in China threatens to pop the $1.7 trillion (£1.07 trillion) credit bubble in local government finance and expose the country's simmering "subprime" crisis, according to the Communist Party's economic guru
Ambrose Evans-Pritchard
the Telegraph,
7:00PM BST 17 Sep 2011
Cheng Siwei, head of Beijing's International Finance Forum and a former deputy speaker of the People's Congress, said interest rate rises and credit curbs to cool overheating were inflicting real pain on thousands of companies used by local party bosses to fund the construction boom
.
"The tightening policy is creating a lot of difficulties for local governments trying to repay debt, and is causing defaults," he told a meeting at the World Economic Forum in Dalian. "Our version of subprime in the US is lending to local authorities and the government is taking this very seriously."
"Everybody assumes that they will be bailed out by the central government if they default, but I disagree with this. It means that the people will ultimately pay the bill for it all, at a cost to the broader welfare."
"Those who are not highly indebted are forced to help those who are," he said, echoing the debate over moral hazard that has divided opinion in the West since the banking rescues.
Local governments have created more than 6,000 arms-length companies to circumvent restrictions on bond issuance, creating a huge patronage machine for party bosses that has largely escaped central control.
The audit office said the loans have reached $1.7 trillion (£1 trillion). While some of the money has been used to finance much-needed investments in water systems and roads, a large part has fuelled unbridled construction with a dubious rate of return.
The local governments depend on land sales for 40pc of their revenue so the process has become incestuous and self-feeding. Such reliance on property sales revenues has greatly aggravated the post-bubble crisis in Ireland.
Mr Cheng said China is entering a "very tough period" as growth runs into the inflation buffers, threatening the sort of incipient stagflation seen in the West in the 1970s and leaving the central bank with an unpleasant choice. "The inflation rate and the growth rate are conflicting with each other: it is very troubling," he said, describing what is known to economists as the Phillips Curve dilemma.
Posted by seemorerocks at 11:23