Something so insignificant that it did not warrant mention on New Zealand news.
As far as reports of “no damge” at Fukushima, let’s wait and see - I don’t see any reasons to believe Tepco.
Typhoon Roke spares Fukushima nuclear plant
At least 16 dead or missing and transport system in chaos as floods and landslides strike central Japan 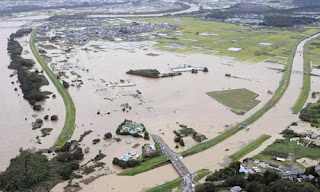 the Guardian,
Thursday 22 September 2011 10.08 BST
Typhoon Roke has moved north across Japan, leaving at least 16 people dead or missing.
Concerns had been raised that the powerful typhoon could threaten safety at the Fukushima Daiichi nuclear power plant, which was sent into meltdown by an earthquake and tsunami on 11 March, but officials said the plant was unaffected.
Hiroki Kawamata, a spokesman for the plant's operator, Tokyo Electric Power (Tepco), said there had been no further leaks of radioactive water or material into the environment. "We are seeing no problems so far," he said.
The typhoon had reached the country's northern island of Hokkaido by Thursday morning after weakening overnight, but there were no immediate reports of damage. The storm was generating winds of up to 78mph.
It reached the city of Hamamatsu, about 125 miles (200km) west of Tokyo, on Wednesday before cutting a path to the north-east and through Tokyo.
Up to 42cm of rain fell in some areas, triggering landslides and flooding.
Police and local media reported 16 people dead or missing, most swept away by rivers swollen by rains in southern and central regions. One person died in a landslide in the northern Iwate prefecture, and two people were swept away in Sendai in the north-east.
Hundreds of tsunami survivors in government shelters in the Miyagi prefecture town of Onagawa were forced to evacuate because of flooding risks.
Strong winds brought down power lines in many areas and officials said more than 200,000 households in central Japan were without electricity on Wednesday.
In Tokyo, rush hour trains were suspended and thousands of commuters were stuck at stations across the city. Long queues formed for buses and taxis.
"The hotels in the vicinity are all booked up so I'm waiting for the bullet train to restart," Hiromu Harada, a 60-year-old businessman, said at Tokyo station.
The Kyodo news agency reported that 5,000 people had stayed inside Shinkansen bullet trains at Tokyo and Shizuoka stations overnight.
The storm had triggered landslides in parts of Miyagi prefecture that had been affected by the March earthquake and tsunami. The local government requested help from the army, and dozens of schools were closed.
An earthquake struck on Wednesday just south of Fukushima, in Ibaraki prefecture. Officials said it posed no danger to the Fukushima Daiichi plant and that it did not cause damage or injuries.
Heavy rains sparked floods and caused road damage in Nagoya and other cities, the Aichi prefectural government said. More than 200 domestic flights were cancelled.
Posted by seemorerocks at 10:25