Financial and economic news from Europe

Geithner Plan for Europe is last chance to avoid global catastrophe
Europe, the G20, and the global authorities have one last chance to contain the EMU debt crisis with a nuclear solution or abdicate responsibility and watch as the world slides into depression, endangering the benign but fragile order that has taken shape over the last three decades.

the Telegraph
25 September, 2011
By Ambrose Evans-Pritchard
The threat of cascading default, bank runs, and catastrophic risk must be taken off the table," said US Treasury Secretary Tim Geithner over the weekend.
"Sovereign and banking stresses in Europe are the most serious risk now confronting the world economy. Decisions cannot wait until the crisis gets more severe."
Euroland's dysfunctional arrangements are no longer a local affair. As the European Central Bank's Jean-Claude Trichet said in Washington, EMU is at the epicentre of a global sovereign debt crisis that risks engulfing all, and is more intractable than 2008 because governments themselves are now crippled.
China, India, Brazil and the world's rising powers will not escape lightly this time if leaders let events spiral out of control. European banks have lent $3.4 trillion to emerging markets (BIS data), or three quarters of external loans to these countries.
The International Monetary Fund warned last week that emerging markets face the risk of "sharp reversals" or even a "sudden stop" if there is further spill-over from Europe. This comes at a time when Asia and parts of Latin America are already in the topping phase of a credit boom, one of epic proportions in China where loans have doubled to almost 200pc of GDP over the last five years.
For article GO HERE
Only ECB has power to 'scare' global stock markets, warns IMF
Brussels has until November's G20 summit to work out how best to turn the €440bn bailout fund into €2tn war chest

the Guardian.
25 September 2011
The International Monetary Fund has warned that the immense firepower of the European Central Bank (ECB) would be needed to "scare" the financial markets and prevent an intensification of the turmoil threatening to send the global economy back into recession.
With investors poised to give their verdict tomorrow on the weekend talks in Washington of finance ministers and central bank governors, European policymakers insisted that fresh moves to scale up the fighting fund to support struggling members of the single currency were in the offing.
Brussels has a deadline of the Cannes G20 summit in early November to flesh out its proposals but is waiting for a key vote in the German parliament this week on the expansion of the European Financial Stability Facility (EFSF) before deciding how best to turn the €440bn (£380bn) pot of capital into a €2tn war chest.
For article GO HERE
Libya conflict may cost UK £1.75bn
Research suggests defence bill may be seven times government estimate, prompting calls for full spending breakdown 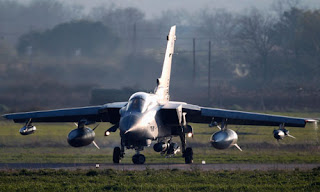 the Guardian,
Sunday 25 September 2011 19.37 BST
The true cost of the UK's involvement in the Libya conflict could be as high as £1.75bn – almost seven times more than government estimates, according to a new study. Research by a respected defence analyst suggests that the government has given a misleading picture of the costs of supporting the military operation, now in its seventh month, leading to demands for a proper spending breakdown.
For article GO HERE
BAE Systems plans to cut 3,000 more jobs as defence budgets are squeezed
Worst affected business is BAE's military aircraft division in Warton, Lancashire, which builds the Eurofighter Typhoon jet
the Guardian,
25 September, 2011
Union leaders will seek urgent talks with the defence group BAE Systems after it emerged the firm is planning to axe a further 3,000 jobs in a "shocking" and "devastating" blow to the industry.
The job cuts come after the company cut 15,000 roles worldwide over the past two years in a cost-cutting programme that many observers expect to continue into next year. Last year's cull, which included about 1,400 redundancies announced just weeks before Christmas, was described as the "beginning of the end" for the UK's military aircraft manufacturing industry.
For article GO HERE
UBS jobs in peril as CEO quits over alleged rogue trader scandal
Fears for staff at Swiss bank as Oswald Grübel resigns over allegations Kweku Adoboli lost £1.5bn in unauthorised trades 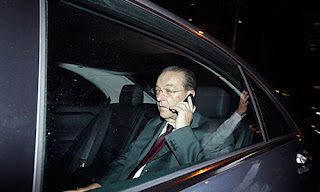 the Guardian, 25 September, 2011
Fears for hundreds of City jobs were raised on Saturday after the dramatic resignation of the boss of UBS, who fell on his sword following the $2.3bn (£1.5bn) alleged rogue trading scandal that has engulfed the Swiss bank and raised calls for a sweeping overhaul of the "casino" investment banking industry.
With Kweku Adoboli, the 31-year-old alleged rogue trader facing four charges of fraud and false accounting still in custody, Oswald Grübel resigned to "bear full responsibility for what occurs" at the bank, which employs 6,000 people in the UK.
For article GO HERE
Posted by seemorerocks at 12:08