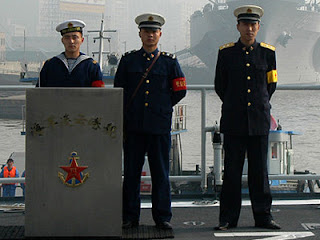 Business Insider
Influential Chinese Communist Party-run newspaper, the Global Times has warned that "every means possible" should be used to halt India's Oil and Natural Gas Corporation (ONGC) exploration in The South China Sea.
The editorial highlights China's concern that India's dealings with Vietnam will lead to a partnership meant to counter China's actions in the Indian Ocean.
India's The Hindu newspaper published an editorial in response saying: "Chinese society has already been indignant about India's intervention in the Dalai (Lama) problem…India should bear in mind that its actions in the South China Sea will push China to the limit."
These developments come after accusations by Vietnam claiming China cut undersea cables by ships employed by PertoVietnam, and a strange Chinese warning three weeks ago when an Indian vessel left its Vietnamese dock.
China's editorial closed with some ominous rhetoric: "We should not leave the world with the impression that China is only focused on economic development, nor should we pursue the reputation of being a “peaceful power,” which would cost us dearly. China has been peaceful for so long that some countries doubt whether it will stick to its stated bottom line. China should remind them of how clear this line really is.’
Posted by seemorerocks at 14:53