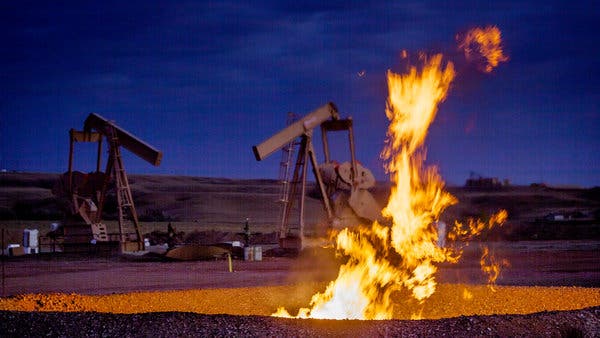 
WASHINGTON — The Trump administration, taking its third major step this year to roll back federal efforts to fight climate change, is preparing to make it significantly easier for energy companies to release methane into the atmosphere.


Methane, which is among the most powerful greenhouse gases, routinely leaks from oil and gas wells, and energy companies have long said that the rules requiring them to test for emissions were costly and burdensome.
The Environmental Protection Agency, perhaps as soon as this week, plans to make public a proposal to weaken an Obama-era requirement that companies monitor and repair methane leaks, according to documents reviewed by The New York Times. In a related move, the Interior Department is also expected in coming days to release its final version of a draft rule, proposed in February, that essentially repeals a restriction on the intentional venting and “flaring,” or burning, of methane from drilling operations.
The new rules follow two regulatory rollbacks this year that, taken together, represent the foundation of the United States’ effort to rein in global warming. In July, the E.P.A. proposed weakening a rule on carbon dioxide pollution from vehicle tailpipes. And in August, the agency proposed replacing the rule on carbon dioxide pollution from coal-fired power plants with a weaker one that would allow far more global-warming emissions to flow unchecked from the nation’s smokestacks.

“They’re taking them down, one by one,” said Janet McCabe, the E.P.A.’s top climate and clean-air regulator in the Obama administration.

Officials from the E.P.A., the Interior Department and the White House did not respond to emails and telephone calls seeking comment.

Industry groups praised the expected changes. “It’s a neat pair” of proposals on methane, said Kathleen Sgamma, president of the Western Energy Alliance, an association of independent oil and gas companies that is based in Denver. The Obama-era E.P.A. methane rule, she said, “was the definition of red tape. It was a record-keeping nightmare that was technically impossible to execute in the field.”
Ms. Sgamma praised the Trump administration for turning the oil companies’ requests into policy, noting that the Obama administration frequently turned proposals from environmental groups into policy. “It all depends on who you trust,” she said. “That administration trusted environmentalists. This one trusts industry.”
The regulation of methane, while not as widely discussed as emissions from cars and coal plants, was nonetheless a major component of Mr. Obama’s efforts to combat climate change. Methane makes up only about nine percent of greenhouse gases, but it is around 25 times more effective than carbon dioxide in trapping heat in the atmosphere. About one-third of methane pollution is estimated to come from oil and gas operations.

The forthcoming proposals from the E.P.A. and Interior Department would allow far more methane to leak from oil and gas drilling operations, environmentalists say. “These leaks can pop up any time, anywhere, up and down the oil and gas supply chain,” said Matt Watson, a specialist in methane pollution with the Environmental Defense Fund, an advocacy group. “The longer you go in between inspections, the longer leaks will go undetected and unrepaired.”
The proposals exemplify President Trump’s policy quest to roll back regulations on businesses, particularly oil, gas and coal companies. While significant aspects of the president’s broader agenda — including immigration and trade policy, and the proposed border wall with Mexico — remain mired in confusion, and as the administration struggles under the investigation into the presidential campaign’s ties with Russia, the E.P.A. and Interior Department have steadily pressed forward with rollbacks of environmental regulations.
“In other areas of policymaking, like immigration and health care, they appear to have brought into the administration ideologues who don’t know a lot about policymaking,” said Cecilia Muñoz, who directed the White House Domestic Policy Council in the Obama administration. “But in climate change and energy, they appear to have brought in people who know exactly what they’re doing, and know exactly where the levers are.”
The pace of the proposals has not been slowed by the resignation in July of Scott Pruitt, who left the top job at the E.P.A. under a cloud of ethics scandals. Andrew Wheeler, a former coal lobbyist who worked in the E.P.A. under the first President George Bush, is now the agency’s acting chief.

The E.P.A.’s new methane proposal, according to the draft seen by The Times, would loosen a 2016 rule that required oil and gas drillers to perform leak inspections as frequently as every six months on their drilling equipment, and to repair leaks within 30 days. The proposed amendment would lengthen that to once a year in most cases, and to as infrequently as once every two years for low-producing wells. It would also double the amount of time a company could wait before repairing a methane leak from 30 to 60 days.

It would also double the amount of time required between inspections of the equipment that traps and compresses the natural gas, from once every three months to once every six months. On the Alaskan North Slope, where oil and gas companies contend that harsh weather makes it difficult to conduct inspections, such equipment would only have to be monitored annually.

In addition, the E.P.A. proposal would let energy companies operating in states that have their own state-level methane standards follow those standards instead of the federal ones. That would include states such as Texas, where the pollution standards have been more lax than federal standards.