Queensland has to import grain to help drought-stricken farmers

Drought wipes out Qld grain crops, forces tonnes to be imported from WA to help farmers 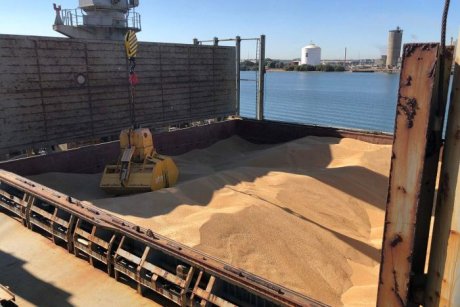 A shipment of grain worth more than $15 million has arrived in Queensland, destined for drought-stricken cattle farmers crying out for feed.

The 30,000 tonnes of grain, which arrived from Western Australia into the Port of Brisbane this week, will be driven out to the Darling Downs, west of Brisbane, where local supply is running out.

The commodity is normally exported from Queensland, but due to poor growing conditions it is having to be shipped in to supply feedlots.

"It is certainly not common, and unfortunately it doesn't look like stopping in the near future.

"There's no other supply, so it's a necessity.

"It has got to the stage where stock literally don't have anything else to eat, so if this grain doesn't come in then they have no food source, and there's only unfortunately one outcome that comes along with that."

"Some are claiming it's as bad as the Federation drought over 100 years ago," Mr Newton said.

He said some growers were lucky enough to plant a few isolated crops due to storm activity in March and April, when there was some moisture, but he was not one of them and considered his season a failure.

He said the Darling Downs had the highest concentration of feedlots in the country, and with pastures so dry, more cattle were relying on growers' grain crops to survive, with each beast consuming about 12 kilograms of feed every day.

"We've pretty well exhausted all of the supplies that are available locally," he said.

"All of the silos on farms and even the bulk handlers are getting pretty well cleaned out now."

He said if the current demand was maintained, the shipments would have to continue for the next 12 to 18 months.