Why Putin Is Smiling At The 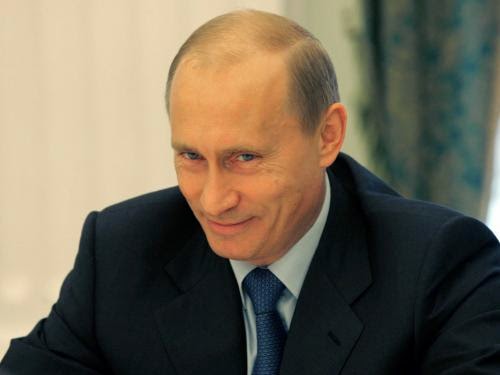 
One of the recurring themes the western media regurgitates at every opportunity is that while the western "diplomatic" sanctions against Russia are clearly a joke, one thing that will severely cripple the economy is the capital market embargo that has struck Russian companies, which are facing $115 billion of debt due over the next 12 months.


Recall that not a single Russian Eurobond issue has successfully priced since Russia's peaceful annexation of Crimea. Surely there is no way Russia can afford to let its major corporations - the nexus of its petroleum trade - go insolvent, which is why Putin will have to restrain himself and beg western investors to come back and chase appetiziing Russian yields (with other people's money of course).

Turns out this line of thought is completely wrong.


Russian companies, facing $115 billion of debt due over the next 12 months, will have the funds even as bond markets shut because of the Ukraine crisis, according to Moody’s Investors Service and Fitch Ratings.

Firms will have about $100 billion in cash and earnings at their disposal during the next 18 months, Moody’s said in an analysis of 47 businesses April 11. Almost all 55 companies examined by Fitch are “well placed” to withstand a closed refinancing market for the rest of 2014, it said in a note on April 16. Banks have more than $20 billion in foreign currency to lend as the tensions prompted customers to convert their ruble savings, ZAO Raiffeisenbank said.

“The amount of cash on balances of Russian companies, committed credit lines from banks and the operating cash flows they will get is sufficient for the companies to comfortably service their liabilities,” Denis Perevezentsev, an analyst at Moody’s in Moscow, said by phone on April 17.


So, Russia can comfortably extend its Ukraine campaign well into 2015? Truly great news for Kiev, which is already bankrupt, and which is scrambling to get every last bcf of gas it can get its hands on before  Gazprom finally pulls the plug in under a month.

Ah, the miracles of positive cash flow... and how quickly it eliminates any so-called political leverage the bearer of the world's reserve currency thought it may have had, leading ultimately to this.

Posted by seemorerocks at 17:57