A vast swath of sea ice that painstakingly formed as somewhat cooler conditions had finally settled in near Svalbard and Frans Joseph Land in the Barents Sea was shattered yesterday as a powerful, heat-laden Arctic cyclone screamed up out of a rapidly warming extreme North Atlantic.
The storm originated west of the Norway coastline where, in recent years, a repository of exceptionally warm water has collected. This near-Arctic and Barents Sea warm pool has resulted in numerous effects including a forced recession of sea ice by hundreds of miles during winter time as well as providing impetus for various anomalous heat waves in Scandinavia in recent years.
This time, the heat pool was the genesis for a powerful storm that delivered an intense package of early season warmth to a section of sea ice drifting in the North Barents Sea region.
Warm Storm Impacts

In the above image, provided by NASA’s  LANCE-MODIS sensor, we can see a 250 mile section of sea ice that had extended out into the Barents Sea over the past few weeks during a cooler period as warmer conditions shifted to the Laptev, East Siberian, and Beaufort Seas. The date of this shot is April 16. To the lower left is the tip of Svalbard. Upper left is the far edge of Frans Joseph Land. Another few hundred miles to the right of far right frame is Northern Norway.

The storm, for now is off frame.

Now on April 17, we can see the storm center in the far left frame near the tip of Svalbard. At this point, the storm has bombed out to an extraordinarily powerful 950 mb low, packing 60+ mph winds. In its upper quadrant, it carried with it temperatures ranging from 10 to 20 C above typical seasonal averages. Perhaps more importantly, through cyclonic forces it pumped waters that were up to 5 C above average temperature up from the depths and into the ice pack. This kind of cyclonic Ekman Pumping, in recent years, has had an increased potential to rapidly reduce sea ice due to warmer surrounding water conditions and warmer waters at depth.
Note that rapid sea ice disintegration is already involved in the wake of this severe Arctic Cyclone.

Now, today, on April 18, we can see that in the aftermath of this powerful Arctic Cyclone there is very little contiguous sea ice left. What remains is what in sea ice parlance can be termed nilas — very thin and diffuse ice of 0-10 centimeters in thickness. Note that the entire 250 mile zone is completely involved in this very visible ice loss and that such losses continue on past Frans Joseph Land and into the Kara Sea.
Further Implications for the 2014 Melt Season

Melt season in the Arctic is now well involved. In addition, we have numerous weaknesses in the Northern Hemisphere Jet Stream that continue to funnel much warmer than average air over the Arctic Sea Ice. Alaska, Siberia and the Barents all continue to see strong warm air impulses that progress well into the zone covered by sea ice.
Today, according to GFS model measures for the zero hour, average Arctic temperatures are 2.24 C above the, already warmer than normal, 1979 to 2000 average. This is a rather high spike for spring, when Arctic temperatures typically start to settle back down after seeing high levels of global warming associated heat amplification during winter time.
The excess heat had already pushed Arctic sea ice extent measures down to near record lows as of April 17. According to NSIDC, extent measures had fallen to 13.9 million square kilometers yesterday, the second lowest level in the measure. With full effect from the recent intense storm not yet fully realized, it is possible that impacts in this region alone could reduce total values by at least 100,000 square kilometers.

Yet one more major blow to sea ice from a powerful warm storm type system. And, in this case, with melt season progressing rapidly and with so much heat already shifting into the Arctic, it is highly unlikely that this zone of newly dispersed ice will see much in the way of recovery over the coming weeks.
Links:
LANCE-MODIS
NSIDC
Pogoda i Klimat
Global Forecast Systems Model
Persistent Arctic Cyclone and the Warm Storm of 2013

Arctic sea ice area is in steep descent, as illustrated by the image below. Sea ice area was only smaller at this time of the year in 2007, for all years for which satellite data are available.

Earlier this year, on March 9, 2014, Arctic sea ice area was at a record low for the time of the year. Since then, area did show some growth for a while, to the north of Scandinavia. This growth could be attributed largely to strong winds that made the sea ice spread with little or no growth in volume. The 30-day Naval Research Laboratory animation below shows recent sea ice speed and drift.

Indeed, sea ice volume in March 2014 was the 2nd lowest on record. Only March 2011 had a lower volume as discussed in a recent post. The 30-day Naval Research Laboratory animation below shows recent sea ice thickness.

Low sea ice volume and area jointly suggest there could be a total collapse of the sea ice later this year, in line with observation-based non-linear trends. For years, this blog has warned that observation-based projections point at Arctic sea ice disappearance within years, with dire consequences for the Arctic and for the world at large.

As said, winds are responsible for much of sea ice variability, and winds could either slow down or speed up such a collapse. On this point, it's good to remember what Prof. Peter Wadhams said in 2012:

". . apart from melting, strong winds can also influence sea ice extent, as happened in 2007 when much ice was driven across the Arctic Ocean by southerly winds. The fact that this occurred can only lead us to conclude that this could happen again. Natural variability offers no reason to rule out such a collapse, since natural variability works both ways, it could bring about such a collapse either earlier or later than models indicate.

In fact, the thinner the sea ice gets, the more likely an early collapse is to occur. It is accepted science that global warming will increase the intensity of extreme weather events, so more heavy winds and more intense storms can be expected to increasingly break up the remaining ice, both mechanically and by enhancing ocean heat transfer to the under-ice surface."

The image on the right, produced with NOAA data, shows mean coastal sea surface temperatures of over 10°C (50°F) in some areas in the Arctic on August 22, 2007. 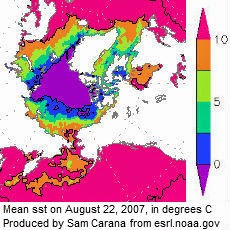 In shallow waters, heat can more easily reach the bottom of the sea. In 2007, strong polynya activity caused more summertime open water in the Laptev Sea, in turn causing more vertical mixing of the water column during storms in late 2007, found a 2011 study, and bottom water temperatures on the mid-shelf increased by more than 3°C (5.4°F) compared to the long-term mean.

Another study found that drastic sea ice shrinkage causes increase in storm activities and deepening of the wind-wave-mixing layer down to depth ~50 m (164 ft) that enhance methane release from the water column to the atmosphere. Indeed, the danger is that heat will warm up sediments under the sea, containing methane in hydrates and as free gas, causing large amounts of this methane to escape rather abruptly into the atmosphere.

Such warming would come on top of ever-warmer water that is carried by the Gulf Stream into the Arctic Ocean and that has already been blamed for large methane releases from the seafloor of the Arctic Ocean last year.

The prospect of an El Niño event, as discussed in an earlier post, makes the situation even more dire.

The consequences of sea ice collapse will be devastating, as all the heat that previously went into transforming ice into water will be asbsorbed by even darker water, from where less sunlight will be reflected back into space. The danger is that further warming of the Arctic Ocean will trigger massive methane releases that could lead to extinction at massive sclae, including extinction of humans.


Hopefully, more people will realize the urgency of the situation and support calls for comprehensive and effective action as discussed at the Climate Plan blog.