Two years ago on Radio NZ they made conclusion that the Antarctic "was not melting like the Arctic" at the very time when scientists were discovering the terrible rate of loss.

All nonsense of course.

The truth was that the ice is being melted from underneath.

"Temperatures in the Antarctic Peninsula have increased by 4.5 degrees Fahrenheit (2.5 degrees Celsius) over the past 50 years — five times the rate of the rest of the planet. And scientists think that warm ocean waters could be melting Antarctica's glaciers as they flow under the floating tongues of ice."

Now, as the good scribes they are they report on this latest paper without any sense of context.

A part of the world's largest ice shelf is melting ten times faster than the rest of it, and water heated by the sun is responsible, a study shows. The National Institute of Water and Atmospheric Research (NIWA) discovered the process happening to the Ross Ice Shelf in Antarctica as part of collaborative research which has just been published in the journal, Nature Geoscience.

NIWA marine physicists Mike Williams and Craig Stewart, and a team from the UK, studied the ice shelf for several years to record how it was melting, and what was causing it.

Dr Williams said the Ross Ice Shelf was about the size of France, and the northwest corner was melting much faster than the rest of the shelf - which was linked to summer heat from the top layer of the ocean


There is a large ocean expanse in front of the Ross Sea Ice Shelf which does not have sea ice because of strong offshore winds. This area, the Ross Sea Polynya, absorbs heat from the sun quickly in summer and drives very high levels of melt underneath the front of the ice shelf.

This is the first study to show how important the heat from the sun is for melting ice shelves, prior to this work it was thought to have only a minor affect.

"What we've always assumed is that the big ice shelves have very low melt rates, so this study changes that perspective and says actually there's another way in which these ice shelves are vulnerable, and if we're wanting to predict what might happen in the future, we need to understand and we need to include that in our modelling," Dr Williams said.


Floating ice shelves stabilise the parent ice sheet, and loss of the major ice shelves would lead to accelerating ice flow and sea-level rise of several metres or more.


The team, including scientists from Cambridge University and the British Antarctic Survey, collected four years of data from an oceanographic mooring installed under the Ross Ice Shelf with instruments measuring temperature, salinity and currents.


Installing the mooring required drilling a hole through 260m of ice and then lowering it into 600m of ocean beneath the shelf.


The data showed that warm water from the upper layer of the open sea transports heat into the cavity under the ice shelf causing melt rates to nearly triple during summer.


Dr Williams said climate change was likely to result in less sea ice and higher surface ocean temperatures in the Ross Sea - which suggests that melt rates in this region will increase in the future.


"This study builds our understanding of the important but rarely observed processes that drive melting of ice shelves. Understanding and monitoring these processes is critical to predicting the future of the ice sheet and global sea level."

Part of the world's largest ice shelf is melting 10 times faster than expected due to the sea warming around it, research shows.
The Ross Ice Shelf, a floating slab of Antarctic ice the size of France which juts into the ocean, is more vulnerable to global warming than previously thought.

The finding suggests that surface water heated by the sun also plays a crucial role in melting ice as well their exposure to warm deep ocean water, as is often thought.
Looking at data over the course of four years, the researchers found that this water flowed under the ice shelf, causing melt rates to almost triple in the summer.
Loss of ice shelves removes a barrier to glaciers transporting water to the ocean, allowing sea levels to rise.
The team, from Cambridge University, spent several years investigating how the Ross Ice Shelf's north-west sector interacted with the ocean beneath it.
Former Cambridge scientist Doctor Craig Stewart, now at the National Institute of Water and Atmospheric Research (NIWA) said: 'The stability of ice shelves is generally thought to be related to their exposure to warm deep ocean water.
However, he and his team found that solar heated surface water also plays a 'crucial role' in melting ice shelves.
The team took measurements of temperature, salinity, melt rate and ocean currents using instruments passed through a 850 feet (260-metre) borehole.
Four years' worth of data were also collected from an oceanographic mooring installed under the ice shelf.
In addition, a custom-made radar system was employed to survey the changing thickness of the ice.
The instruments showed that surface water heated by the sun flowed into the cavity under the ice shelf, causing melt rates almost to triple in the summer.
Doctor Stewart added: 'Climate change is likely to result in less sea ice, and higher surface ocean temperatures in the Ross Sea, suggesting that melt rates in this region will increase in the future.'
Dr Poul Christoffersen, from Cambridge University, pointed out that collapsing ice shelves can double or triple the speed at which glaciers flow to the ocean.
'The difference here is the sheer size of the Ross Ice Shelf, which is over 100 times larger than the ice shelves we've already seen disappear,' he said.
'The observations we made at the front of the ice shelf have direct implications for many large glaciers that flow into the ice shelf, some as far as 900 kilometres (559 miles) away.'
The findings are published in the latest issue of the journal Nature Geoscience. 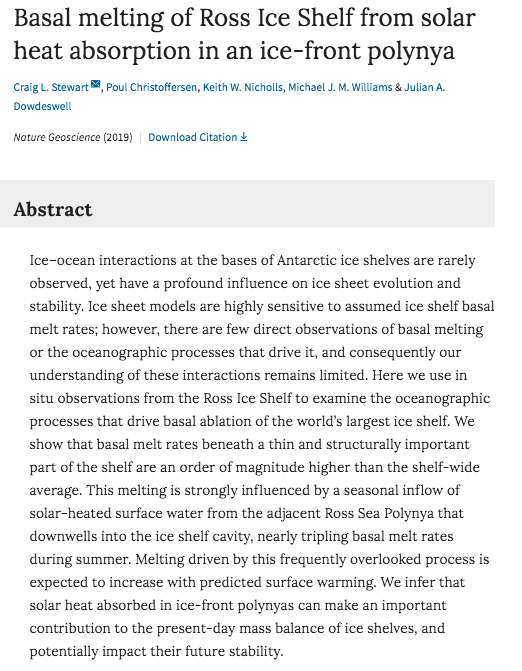