"The dog ate my breakfast": the police's new version of events 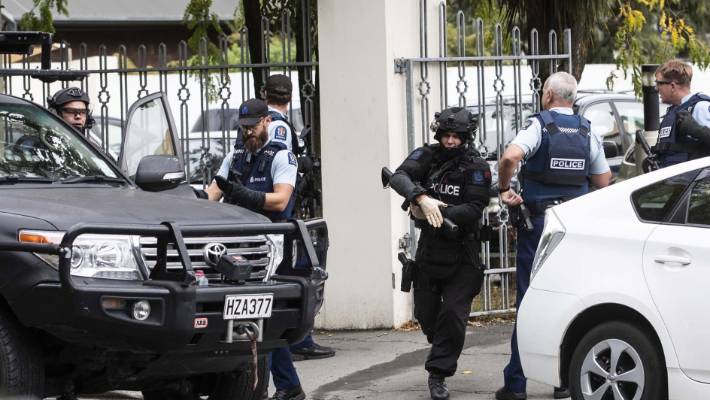 The first armed police to arrive near Christchurch's Al Noor mosque after a gunman's massacre did not see the suspect drive away because a bus blocked their view.
By the time first responders got to the Deans Ave mosque, where 43 people were fatally shot on March 15, the suspect was already a minute away from his second alleged target, the Linwood mosque.
In the minutes after the terror attack began at 1.40pm, police also believed they had three shooting scenes on their hands. There were reports that shots were fired at Christchurch Hospital's emergency department, but it later transpired that did not happen. 15.
Police learned about the Linwood attack at 1.56pm, when a member of the public flagged down a police car and told them shots had been fired in Linwood.


It took police 10 minutes from the start of the shooting at Deans Ave to get a description of the vehicle the alleged shooter was driving.
The new details are contained in a just-released timeline of the police response to the Christchurch terror attacks.
On Wednesday, Commissioner Mike Bush said the public should have as much information about the response as possible.
ARREST 18 MINUTES AFTER ATTACK STARTED

At 1.41pm, police received the first 111 call. By 1.43pm, all available police units were en route to the Al Noor Mosque.
At 1.46pm, AOS members arrived near the scene. They left their vehicle, started approaching the mosque and a member stopped to help a critically injured victim.
"At this point the alleged offender is leaving the area, and his vehicle is obscured from the view of these AOS members by a bus," Bush said.
Bush said at this time there was no vehicle description, no information an offender had left the mosque, or how many shooters there were.
Police and AOS and frontline staff arrived at the Al Noor mosque at 1.51pm.
It took the alleged offender six minutes to get to the Linwood mosque. He was there for three minutes, before leaving at 1.55pm.
Police did not have a description of the offender's vehicle until 1.53pm, just after it was sighted on Bealey Ave heading towards Fitzgerald Ave.
At 1.56pm, police were told shots were fired at the Christchurch emergency department.
Sixteen seconds later, a member of the public flagged down a police car and said shots had been fired in Linwood.
At 1.57pm, the vehicle was seen by a police car on Brougham St and a pursuit began. The vehicle was stopped at 1.59pm and the offender was apprehended, Bush said.
In the same minute, police arrived at the Linwood mosque.
There were 18 minutes from the time of the first 111 call to the arrest of the offender.
At 2.06pm, it was confirmed no shots had been fired at the hospital.
"I reaffirm my previous comments that police staff acted as quickly as humanly possible given the rapidly unfolding nature of the event, and the information available to us in that very brief period of time," Bush said.
The investigation team was still focussed on confirming certain details, particularly timings from a number of electronic systems and devices with different internal clocks, Bush said.
The information released on Wednesday was the best information he had to date, and what police could release without compromising the criminal investigation or trial, he said.
"I want to emphasise we are still in an investigation phase and now a prosecutorial stage."
To provide "absolute transparency", an independent team, including a Queen's counsel, would debrief on the police response.
"The debrief is an important process to ensure any lessons are learnt, and used to inform future operational responses," Bush said.
The attacks prompted New Zealand's terror threat level to be lifted to "high" for the first time in the country's history. On Wednesday, this was downgraded to medium, meaning police will no longer routinely carry firearms.
International police were in Christchurch for a specialist training course on March 15. Officers from Queensland, New South Wales, Victoria, Western Australia and Hong Kong, as well as New Zealand Defence Force personnel, responded alongside New Zealand police and gave first aid at the Linwood mosque.


Bush thanked them on Wednesday, saying "their specialist skills have been credited with saving lives and we were fortunate to have them on the ground with us".
Posted by seemorerocks at 18:46