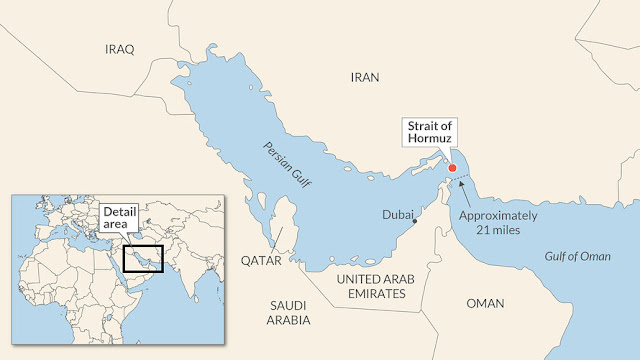 23 April, 2019
Geography could matter for investors if Tehran moves to close or at least hinder the world’s busiest waterway for global oil shipments in retaliation for the U.S. decision Monday to demand that all Iran oil buyers halt purchases by May 1.
Read: The end of Iranian oil waivers and what it means for the OPEC-led output cut pact
Most analysts see little scope for Iran to close the Strait of Hormuz, often described as the most crucial “choke point” in the global energy supply chain. But Tehran’s threat to disrupt the flow of crude — and the prospect of military action in the region — have the potential to stoke anxiety, experts said, contributing to a geopolitical premium for crude prices.
“I think that Iran is looking at this as its one card — its trump card so to speak — where it could really disrupt oil prices in the short term,” said Rockford Weitz, professor of practice and director of the Fletcher maritime studies program at Tufts University, in a phone interview.
Oil jumped Monday to a six-month high, largely on supply concerns, following the U.S. decision.
Crude extended gains Tuesday, with the U.S. benchmark, West Texas Intermediate CLM9, -0.48% rising more than 1%, while the global benchmark, Brent crude LCOM9, -0.46% added another 0.5% to close shy of $75 a barrel.
Here’s what investors need to know:

Where is the Strait of Hormuz?

The Strait of Hormuz is a narrow waterway that links the Persian Gulf with the Gulf of Oman and the Arabian Sea.
At its narrowest point, the waterway is only 21 miles wide, and the width of the shipping lane in either direction is just 2 miles, separated by a two-mile buffer zone.

Why is it important?

Oil tankers carrying crude from ports on the Persian Gulf must pass through the strait. Around 18.5 million barrels a day of crude and refined products moved through it in 2016, nearly a third of all seaborne-traded oil and almost 20% of all oil produced globally, according to the U.S. Energy Information Administration. That makes the Strait of Hormuz the world’s most sensitive oil transportation choke point.

A commander in Iran’s hard-line Islamic Revolutionary Guard Corps on Monday pledged to interrupt the flow of oil through the strait, The Wall Street Journal (paywall) reported Monday. According to the report, IRGC Naval Forces Commander Alireza Tangsiri told Iranian state TV network Al Alam that if Iran is barred from using the strait, “we will close it. We will defend our honor and wherever it comes to defend Iran’s rights, we will retaliate.”
On Tuesday, a U.S. State Department official called on Iran to keep the strait and the Bab al-Mandab waterways open, Reuters reported, saying, “We call on Iran, and all countries, to respect the free flow of energy and commerce, and freedom of navigation.”

Could Iran close the strait?

Iran’s ability to close the waterway to traffic is in doubt, thanks in part to the presence of the U.S. Fifth Fleet, which is based in Bahrain.
The U.S. naval presence would make it extremely difficult for Iran to choke off traffic, “but they could once again engage in provocative military maneuvers—such as having their speedboats harass U.S. vessels,” wrote Helima Croft, global head of commodity strategy at RBC Capital Markets, in a research note.
She said a change in the leadership of the Revolutionary Guards, following the U.S. decision to formally declare the IRGC a terrorist organization, “could signal that the Iranian Supreme Leader Ayatollah Khamenei wants to pursue a more muscular response to his adversaries.”
Among potential measures, Iran could mine the waterway or otherwise threaten traffic through the strait, Weitz said, though such actions would bring a swift response from the U.S. and would likely serve to unite oil importers, including China, against Tehran. Still, mines would likely take some time to clear, causing turmoil in energy markets that could ripple across other assets.
Weitz sees such a scenario as unlikely but says the risk isn’t negligible.
Most likely, Tehran engages in a lot of bluster and rhetoric, perhaps accompanied by military exercises, but refrains from crossing the line into laying mines or threatening to fire missiles at tankers, he said.