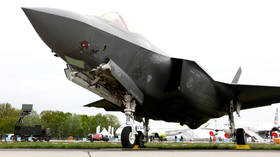 RT,
23 April, 2019
If Turkey can't get F-35 fighter jets from the US, it will be looking for a substitute elsewhere, the Turkish Foreign Minister said. The US threatened to boot Ankara from the program over its S-400 deal with Russia.
Speaking to media after a reception at the Turkish Grand National Assembly on Tuesday, Turkish Foreign Minister Mevlüt Çavuşoğlu said that his country might consider other options if Washington follows through with its threats and leave it without F-35 stealth fighter jets.
"We are already partners in the F-35 manufacturing program, we participate in this project, we have paid the necessary amount," Çavuşoğlu said.
"There are currently no problems with this. But in the worst case scenario, we will have to satisfy our need in another place, where the best technologies will be offered," he added. 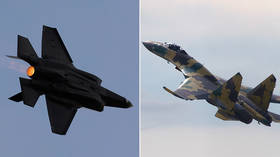 The same day, Turkish Defense Minister Hulusi Akar hinted that Ankara will put a "plan B" in action in case the deal with the US falls apart.
"We have short-term, medium-term and long-term plans," the defense minister said.
The US has threatened to freeze the delivery and terminate Turkey's participation in the F-35 program altogether if it does not scrap the deal for the purchase of Russia's S-400 air defense complexes while voicing concerns that it can harm NATO's interoperability and compromise the security of the F-35s. US Senators floated the idea of imposing sanctions on Turkey under the Countering America's Adversaries Through Sanctions Act (CAATSA), if it does not abandon the Russia-made complexes.
READ MORE: ‘Nothing to do with NATO or F-35’: US pressure over S-400 is about Turkey’s sovereignty – Erdogan
Turkey insists that the surface-to-air missile defense system poses no risk to either the fighter jet program or the NATO systems. To alleviate Washington's concerns, Turkey proposed creating a technical committee that would review possible security threats from S-400. However, the US so far has shown no interest in the proposal.
Ankara has dismissed the US' ultimatum as an attempt to browbeat it into compliance. Turkish President Recep Erdogan argued last month that the US opposition to the S-400 deal has "nothing to do with ether NATO and the F-35 nor the security of the US," but stems from Turkey's pursuit of an independent policy in the region, particularly in Syria.
Earlier this month, Çavuşoğlu indicated that Ankara might buy even more military equipment from Russia, including an alternative to the F-35 jets if the US deliveries are stalled.
"There are F-35, but there are also aircraft manufactured in Russia. If we are not able to purchase F-35, Turkey will buy similar aircraft from other countries," Çavuşoğlu said.
So far, four out of some 100 F-35 jets have been delivered to Turkey and four Turkish pilots are receiving training in the US.