The agenda trumps over any form of truth


A “marriage of convenience between ISIS and the Sri Lankan government”: NZ Deep State operative Paul Buchanan rails against the Sri Lankan Minister of Defence – and the TRUTH

And then came the bombings in Sri Lanka where the death toll has reached 349 dead.

The Sri Lankan government seems from a distance at least, to be doing what the NZ government never did - and investigating the whole affair and waiting before coming up with a theory as to whodunnit.

Compared to those who are running this country I was quite impressed with Sri Lanka's Junior Minister of Defence.


In his press conference he stated that the Easter Sunday attacks in Colombo were an act of revenge for the Christchurch attack on 15 March.

Go back to 20 March and the reporting that ISIS and "every major jihadist group" were threatening retaliation after Christchurch.

Back then the NZ media didn't seem to have too many problems with this possible narrative. 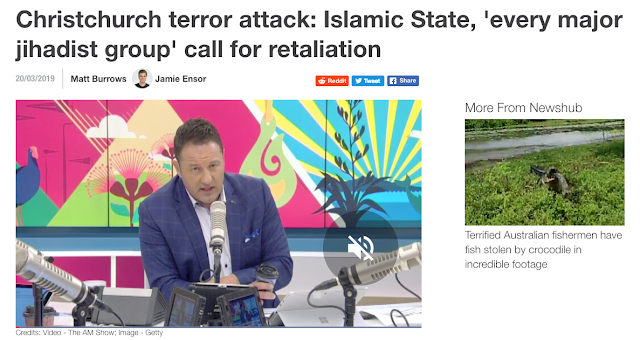 Listen to this piece with another interview with yet another "talking head" from back then:
On the surface of it it would appear that there was little possibility that ISIS could have had time to mount an attack in Sri Lanka in response to the Christchurch attack.


But who is to say that preparations were not already in train for an attack and the Christchurch attack provided the terrorists with the motivation to attack Christian targets on Easter Sunday?


That is what the Sri Lankan minister seems to be saying and New Zealanders would know this if their media provided the whole press conference instead of just reporting what the government WANTS you to know.

Here is what the government wants to hoodwink you into believing 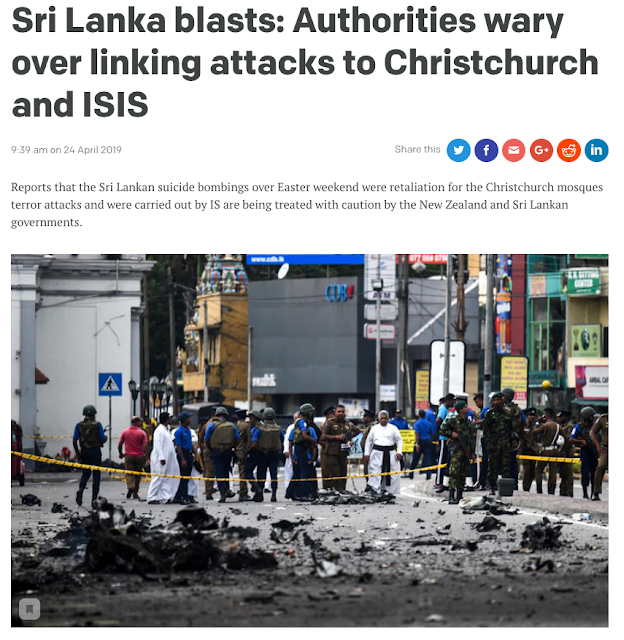 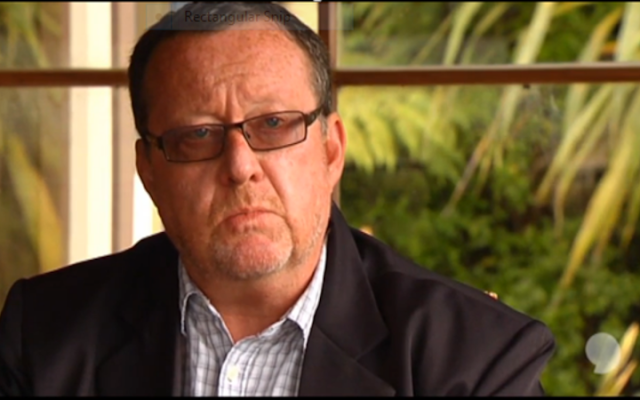 And then in wades American Paul B.Buchanan, shill for the Five Eyes and American Deep State with the disgusting piece below.

How do I know this and what proof do I have?  Only what comes out of his mouth in conjunction with the following:

Dr Paul G. Buchanan is a former policy analyst and intelligence consultant to US government security agencies who specializes in matters of security, comparative and international politics. He is a US citizen permanent resident in New Zealand ...These responsibilities required him to have a Top Secret security clearance issued by the US government. After emigrating to New Zealand in 1997 he worked with the New Zealand Defense Forces as an educational consultant on issues of unconventional warfare, and has more recently lectured at the Australian Defense College on Southeast Asian geopolitics. He has an established profile as a media commentator on matters of international import. 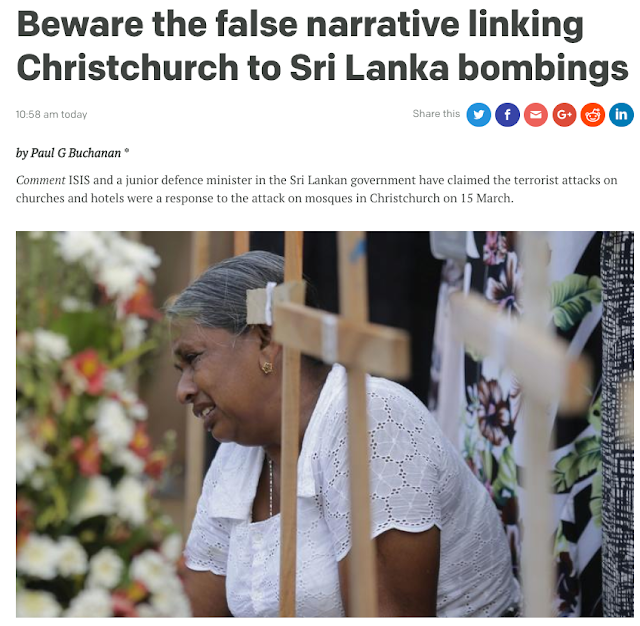 
You can get a sense of the toxic message by listening to the interview below:

Buchanan says this is a "marriage of convenience between ISIS and the Sri Lankan government"to deflect the responsibility elsewhere.

The attacks are designed to hurt Sri Lanka's tourist business upon which it depends.

"Local grievances in play cloaked in the narrative of the clash of civilisations....

See what he is saying here:

"They occurred against a backdrop of rising violence against both Muslims and Christians in Sri Lanka by Buddhist militants, the real motive for the Easter attacks. These were not random or foreign in origin, but represent a violent response by one oppressed minority using terrorism against another minority and tourists in order to make a sharp point to the constitutionally empowered majority that it sees as increasingly oppressive in nature (70 percent of Sri Lankans practise Buddhism, which is the official religion of the country and which has constitutionally protected privileges.)

"Christians were the targets because they were left unprotected by an indifferent or incompetent government, while tourists were attacked because the country depends on them for hard currency revenues. Neither targeted group were the real subject of the attacks, nor was the objective of the attacks strictly about them."

He doesn't just 'seem' to be saying but IS saying that this is "a marriage of convenience between ISIS and the Sri Lankan government" to deflect the responsibility elsewhere and that "Local grievances in play cloaked in the narrative of the clash of civilisations...."

I would have to go through, line-by-line, paragraph-by-paragraph but this representative of the American Deep State in New Zealand is more about narrative than truth and any lie will do.

The Sri Lankan government has scarcely started its investigation (having only just buried its victims) and Paul Buchanan (just like he knew about the 'lone wolf' 'white supremacist' as the bullets were still flying) knows exactly what went down.

Or he knows what the Deep State wants you to think

***
There is much that is unclear. The "islamophobic" line of the Indian media who revealed the mastermind of the attack long before the rest of the media seems to have been borne out in the last 24 hours.

There is the whole question of the scandal around intelligence given to Sri Lankan officials but not handed on - something that if was to guess had more to do with infighting between the president, Maithripala Sirisena and the prime minister, Ranil Wickremesinghe than anything else.


Sri Lanka has had almost a decade of peace after defeating the Tamil Tigers (LTEE) and I suspect that they have been caught off-guard, underestimating, like so many other governments the threat.

This article, written by a Sri Lankan, appeared in the NZ Herald. 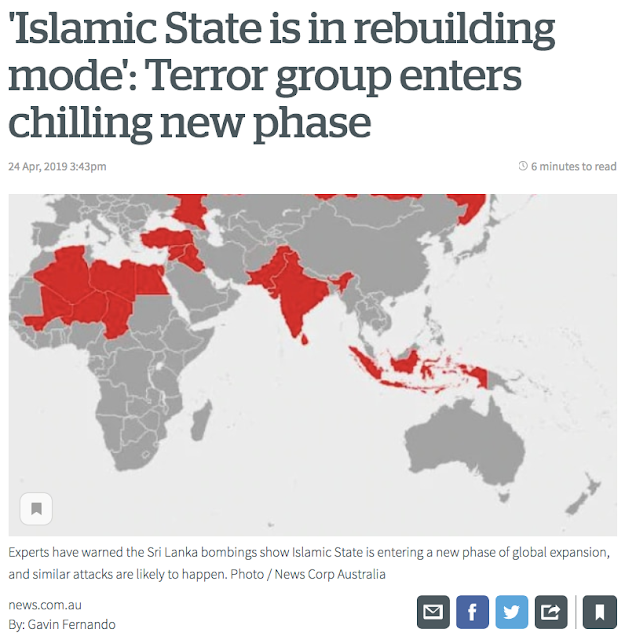 A previously unknown group, National Thowfeek Jamaath is seemingly behind this and, I agree, they could not have brought about such a co-ordinated attack on their own and had to have logistical and financial assistance, first and foremost ISIS who seem to be making a bit of comeback in Syria with a little help from their friends.

Now who would be powerful enough to have stood behind ISIS and local Islamist organisations?

I can't say for certain but after reading Paul Buchanan I have my own suspicion- the same people who have allowed ISIS to make a comeback when they seemed to have been on on their last legs.

Sri Lanka and New Zealand are both small countries but Sri Lanka is not a member of the club.


New Zealand IS, as can be seen from this 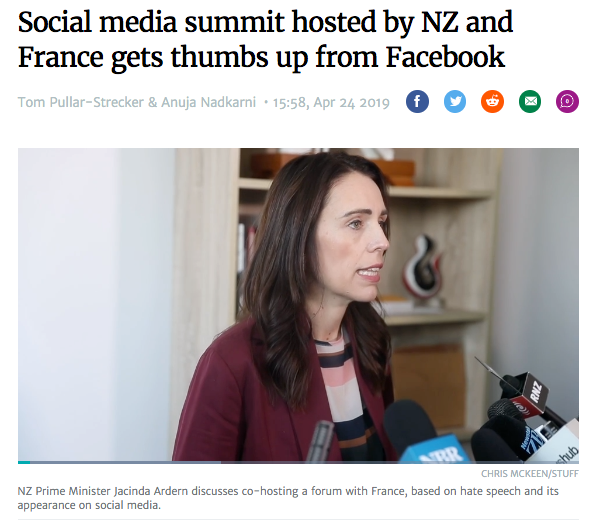 There is little evidence of a false flag in Sri Lanka. Interpreting military drills prior to the attacks as 'evidence of such' is confirmation bias and drawing a long bow.

There does seem to be a habit of high-placed US officials turning up at key times (such as John Podesta in the lead-up to the Christchurch massacre) and Sr Lanka seems to be no exception,


At the beginning of March to praise Sri Lanka's telecoms privatisation tsar, Mangala Samaraweera and to threaten Sri Lanka to get them to fall into line on the "struggle against hate speech" 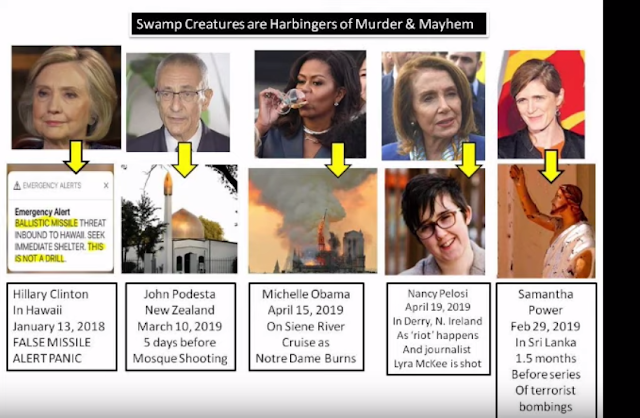 The interpretation in this video is suspect but the facts are indesputable.

Samantha Power and Mangala Samaraweera on the Same Wagon Train 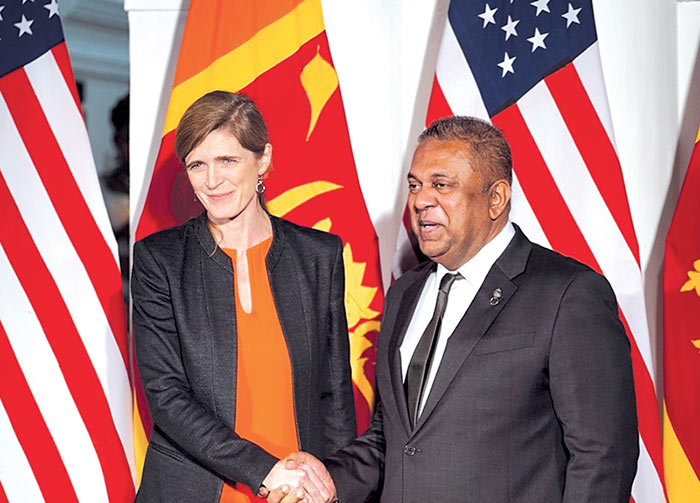 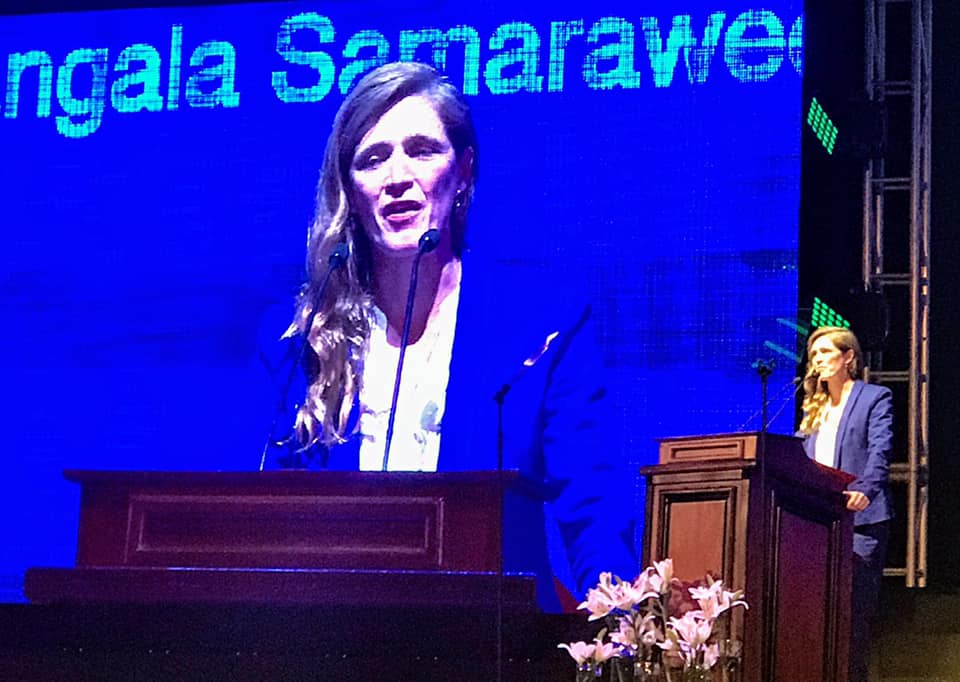 What We Can Learn From Mangala’s 30 Years In Politics: Ambassador Samantha Power’s Speech – Full Text 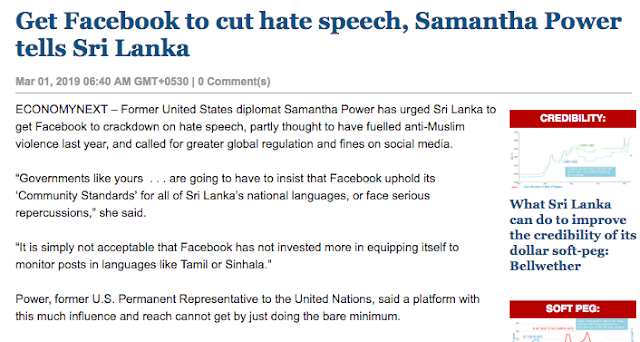 “Governments like yours . . . are going to have to insist that Facebook uphold its ‘Community Standards’ for all of Sri Lanka’s national languages, or face serious repercussions,” she said.
“It is simply not acceptable that Facebook has not invested more in equipping itself to monitor posts in languages like Tamil or Sinhala.”
Power, former U.S. Permanent Representative to the United Nations, said a platform with this much influence and reach cannot get by just doing the bare minimum.
“Facebook needs to be far more transparent, so that experts and civil society can guide the company in how to do better in the context of the unique challenges Sri Lanka faces,” she said, referring to anti-Muslim violence last year, after hate speech and conspiracy theories about Muslims disseminated on social media.

Her remarks were made at a forum to mark 30 years in politics of Finance Minister Mangala Samaraweera, a former Minister of Post and Telecommunications, who spearheaded the privatisation of Sri Lanka’s telecommunications industry.

Today, Sri Lanka has one of the highest numbers of phones per person in all of Asia, with the country of 21 million having 34 million cell phone subscriptions. Some six million people regularly use Facebook.
Power said Samaraweera was one of the first political leaders to take to Twitter during the crisis to condemn the hate speech, sending a clear message of zero tolerance for politicians and others who incited racial violence.

“In societies like ours – with mixed ethnicities and religions, with free speech and extreme voices – we ignore this reality at our peril,” she said.

Power said rapid advances in fields from social media to AI to automation are posing profound risks to democracies.

“These tools are going to be decisive in global development going forward, but governments must confront their dark uses as well as their boundless possibilities,” she said.
“I believe we need to dramatically increase our scrutiny of the effects of new technologies. . . . these platforms also have potentially deadly impact when it comes to the rights and well-being of marginalized groups,” Power said.
“When it comes to companies like Facebook, Twitter, and Google, which failed for too long to grapple with the dangerous uses and effects of their products, it does now finally seem that they are seized with the abuses that their platforms have enabled.

“But these companies need to prioritize contributing to the health of democracy as a goal, right alongside making yet more money.

Power said she was encouraged to hear that Facebook has committed to serving up to 20,000 Sri Lankan children in a digital literacy program to be run this year, and that they are participating in the government’s MART Social Circles initiative, to prepare people to better discern fake news.
“In my country, I would like lawmakers and policy leaders to think about a number of approaches:, (such as) instituting regulations and heavy fines for failing to remove hate speech.”

Power also said governments should greatly restrict the ability of advertisers (or nation states disguised as such) to micro-target users with messages designed to mislead and enrage.

She also advocated re-thinking the type of anonymity afforded to users so as to cut down on the spreading of lies with impunity.
“And probing seriously whether some of these tech monopolies have become so dangerously big – and so dangerous to open society – that they need to be broken up.”
(COLOMBO, March 01, 2019-SB)
https://economynext.com/Get_Facebook_to_cut_hate_speech,_Samantha_Power_tells_Sri_Lanka-3-13588-10.html

He ought to learn how to string sentences together - it takes a verb
Posted by seemorerocks at 16:09