I would love to resume reporting on other things - it may be a forlorn hope.

Footage from just before one of the Sri Lanka bomb blasts shows the eerie moment one of the suspected bombers makes his way into a church.
On Sunday, 290 people were killed in a series of explosions across Sri Lanka, including in the St Sebastian's Church in Negombo, north of Colombo.
CCTV vision from just prior to the explosion shows a man wearing backpack making his way through crowds outside of the church.
Indian channel TV9 reports the man is one of the suicide bombers, who are suspected to be a part of the extremist Muslim group National Thowheed Jamath.
Links to other groups, like Islamic State and Al-Qaeda, have not been ruled out by local authorities.
The series of explosions happened across the country, with several hotels - the Shangri-La, the Kingsbury, the Cinnamon Grand and the Tropical Inn - targeted.
The manager of the Cinnamon Grand hotel in Colombo told AFP that one of the alleged suicide bombers checked into the hotel the night before the attack and detonated the blast as he was served breakfast.
Emergency powers have been invoked, allowing police and military to detain and interrogate suspects without court orders.
Among those killed in the blasts were three children of ASOS billionaire Anders Holch Povlsen.
Newshub. 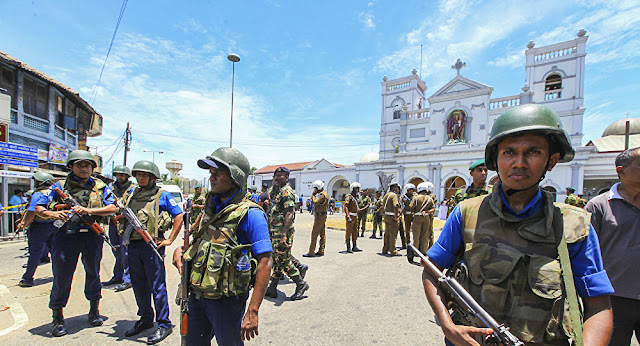 According to the Sri Lankan news outlet Ada Derana, a suspicious package has been discovered at Kollupitiya Railway Station in Colombo.
A bomb disposal unit has been deployed to the site of incident, according to local media reports.
The suspicious package was discovered in one of the ladies' compartments of a Puttalam-Mount Lavinia train, according to reports.
Police have confirmed that nothing suspicious was found in the parcel at Kollupitiya Railway Station.
On Sunday, the country was shaken by a series of coordinated attacks, which killed at least 310 people and left another 500 injured. These are the worst attacks in the country's modern history since the end of the 25-year-old civil war.
Colombo has launched a massive security operation in the wake of the tragedy. As of Monday, at least 24 people were detained in connection with the attacks.