The dubious claims of the French mainstream media on immigration

Jean-Yves Le Gallou: The Reality of the Great Replacement The following is a translation of the summary of Jean-Yves Le Gallou’s speech at the third Fête du Pays Réel (Festival of the Real Country), held on March 30. This is a useful summary both of some of the dubious claims of the French mainstream media on immigration and of the known facts.
* * *
If disinformation is extremely widespread, immigration is surely the area in which it is strongest, notably on the question of the great replacement. On this point, the mainstream media make mutually contradictory claims, because they assert both that the great replacement does not exist . . . and that it is not intentional!
I. “The great replacement doesn’t exist”
To discredit those who assert the existence of the great replacement, the media again use contradictory arguments because they claim on the one hand that France has always been a land of immigration but, on the other hand, that the structure of the population has not fundamentally changed.
1.a “France has always been a land of immigration”

Translator’s note: Immigration to France since 1851. From the end of the Barbarian Invasions in the sixth century to the nineteenth century, there was little immigration to France, and what there was largely of Europe origin.
As shown by a monumental study[1] edited by Dupâquier,[2] this is a falsehood. In fact, for 5000 years, the French population, stemming from an Indo-European settlement, has changed very little: a few percentages over several centuries. The bulk of these migratory movements took place within the European continent, including what has been called “the great invasions.”[3]
It is true that at the end of the nineteenth and at the beginning of the twentieth centuries, France experienced migratory phenomena, but this largely concerned Catholic populations coming from Poland, Italy, Spain, or Portugal. This remained the case up to the 1960s.
1.b “The immigrant population is stable” 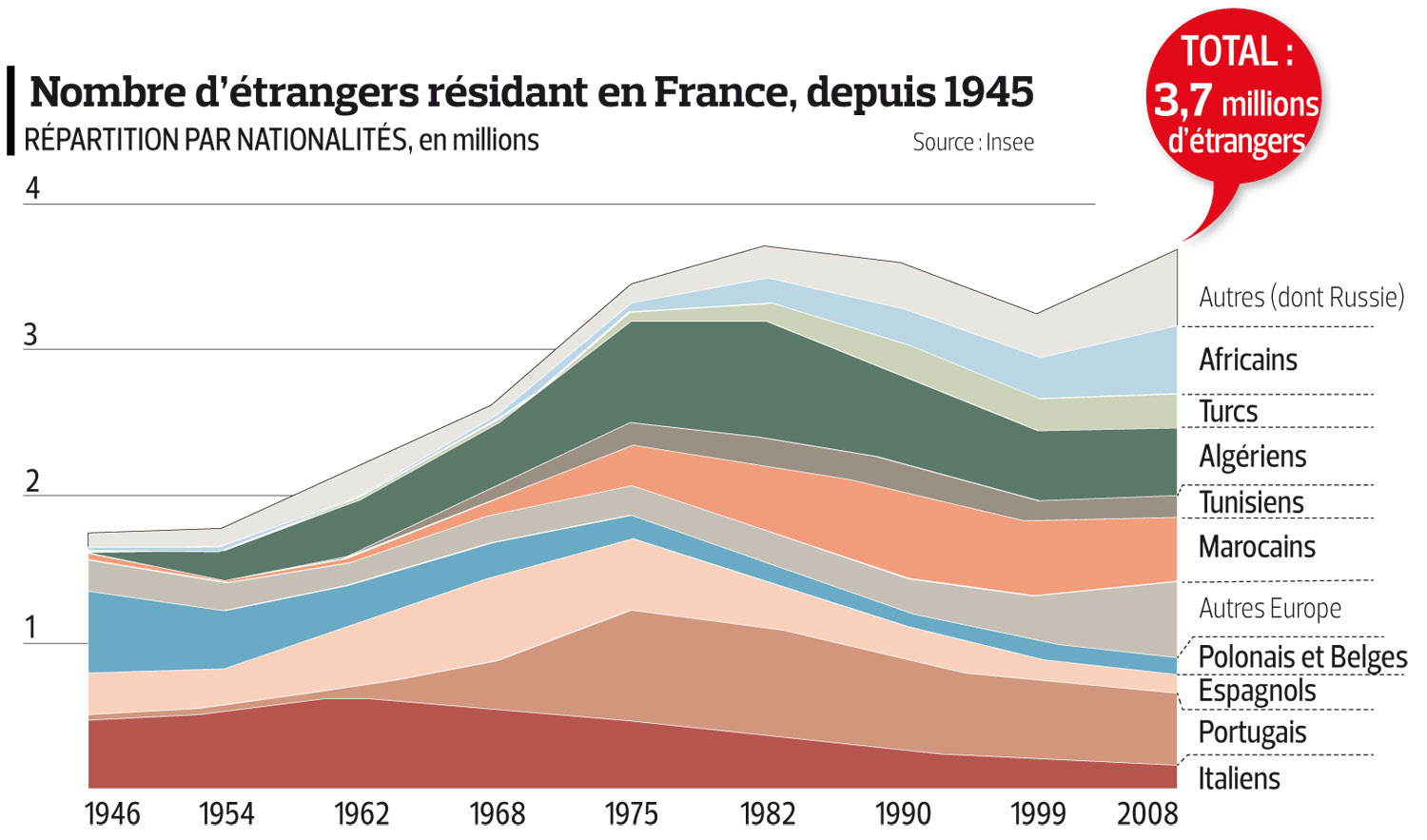 Translator’s note: Mainstream politco-media institutions like to use charts to show that the legally foreign population in France has been “stable” since the 1960s and therefore, they sophistically add, no population change is occurring.
Even according to official statistics, this is false. In 1911, the foreign population represented 3% of the total, as against 5 or 6% today. This development could seem insignificant but, in reality, this number – the stability of which over the past decades immigrationists like to emphasize – hides a quite different reality. Every time that 100,000 or 150,000 foreigners arrive on French soil, just as many are naturalized.
As such, although the administrative reality does not change (the proportion of foreigners), there is another reality which changes considerably: cultural, political, sentimental, and civilizational reality. Today the term “French” has lost much of its content, because one can have French nationality without having the slightest attachment to France, and in any case without participating in its civilization.
One can estimate the share of the population not originally from France or Europe at 20%, a number confirmed by several sources. Thus the CSA[4] has criticized the media for having TV shows with only 18.5% “diversity,” proof that they consider that its demographic weight is much higher!
What’s more, the INED[5] and the INSEE[6] estimate the proportion of foreigners and descendants of foreigners at 19.5%. Admittedly, these figures include the perfectly assimilated descendants of Europeans and therefore this number should, to a certain extent, be revised downwards.
In fact, for the most part, this figure should be revised upwards! Firstly because the study in question concerns the 2008-11 period and the situation has worsened since. Secondly because the population of non-European origin is not well studied. A parliamentary report admits that we do not know the population of Seine-Saint-Denis[7] by a margin of error of 30%! Finally because this study only takes three generations into account: immigrants, their children, and their grandchildren, supposing that afterward assimilation is achieved. This is certainly true in the context of European immigration, it is much less true concerning non-European immigration.
It is also claimed that immigrant entries are stable, even though in 2008 there were 210,000 recorded entries and in 2018 there were 410,000.[8] It almost doubled!
The 20% figure that I mentioned earlier is also corroborated by Jérôme Fourquet in his latest book, which incidentally has a very revealing title: The French Archipelago: The Birth of a Multifarious and Diversified Nation.[9]

Translator’s note: The rising percentage of Muslim first names for newborns in France.
The director of the Department for Public Opinion and Business Strategy of the IFOP polling organization observes that 18.5% of newborn boys have a Muslim first name. This figure, one must emphasize, does not take into account ambiguous first names and only gives a sense of Muslim immigration and not of non-European immigration as a whole, as the latter is not exclusively Muslim.

Translator’s note: The rising percentage of newborns tested for sickle-cell disease in France’s regions, a rough indicator for non-European ancestry.
Another indicator: the tests for sickle-cell disease are of interest because they are performed at birth and they concern a disease which largely affects non-Europeans. This figure is to be taken with caution because our Caribbean compatriots and some European newborns may take the test, while conversely the Chinese for example do not. The take-away is that this test, which was performed on 20% of newborns in 2001, concerned 38% in 2017.
The demographic figures, while being very revealing, by no means describe the whole reality of the great replacement. It is not only a part of the population which is changing, it’s our civilization: the growing role of Ramadan in our society, the sharia which is becoming the law in certain neighborhoods, the increasing popularity of the headscarf, the generalization of halal (50% of market animals are slaughtered according to this rite). 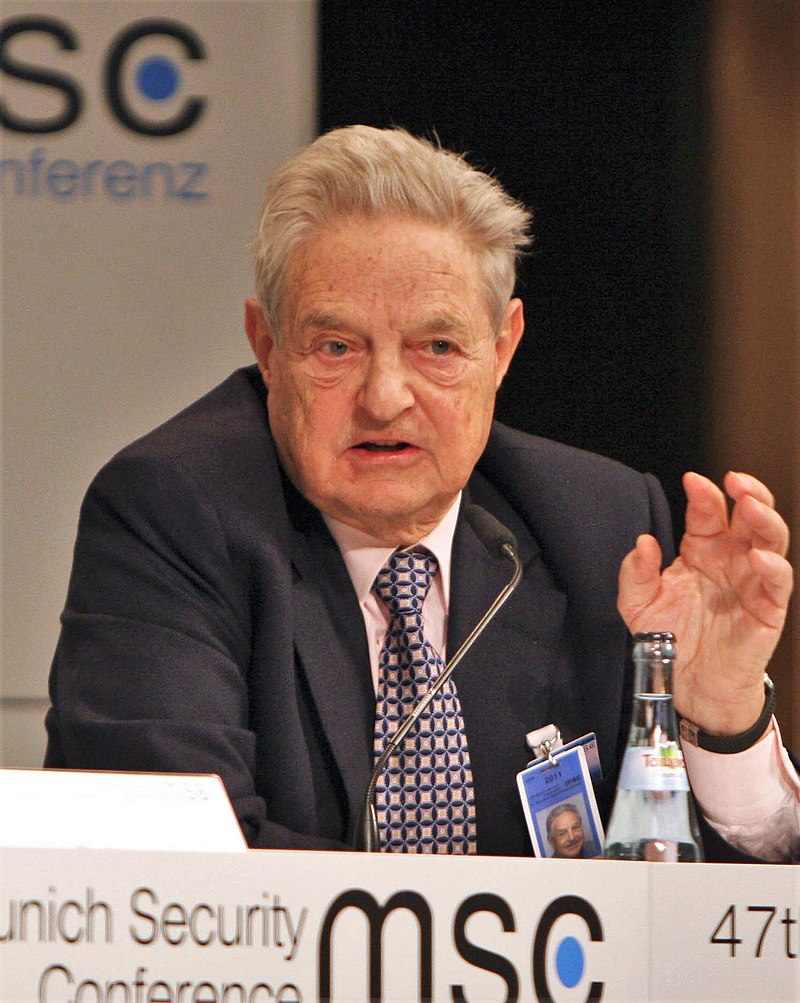 Translator’s note: The financial speculator George Soros has opposed European patriots like Viktor Orbán and used his billions to pressure Europe to open up to Third-World immigration. He said in October 2015, at the height of the migrant crisis: “Our plan treats the protection of refugees as the objective and national borders as the obstacle.”
The media, while denying the existence of the great replacement, also assert that mass immigration is not the consequence of a political will, which is treated as a “conspiratorial” viewpoint.
This question certainly deserved to be debates, even if there is evidence which is difficult to deny. In the first instance, everyone can observe that, against public opinion (as revealed by all opinion polls), the pays légal[10] is infinitely more favorable towards the advocates of immigration than its opponents. The latter do not have much access to the mainstream media or the big publishers. On the contrary, they are often welcomed before the authorities of the High Court of Paris’ famous Seventeenth Chamber![11]
The news is teaming with revealing examples. Thus, recently, identitarians were held in custody for 48 hours for having peacefully demonstrated. On the other hand, for an activist favoring illegal immigration to the country, the Constitutional Council blocked the penal code in the name of the constitutional value of the ‘principle of fraternity’![12] 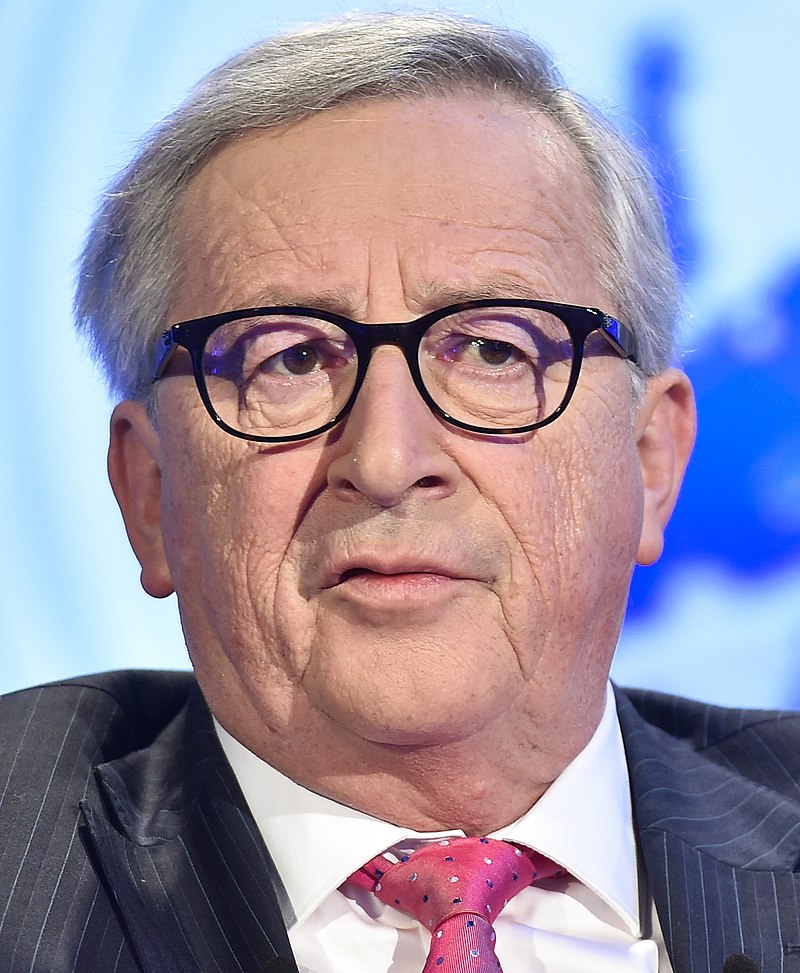 Translator’s note: In August 2016, amidst the migrant crisis, European Commission President Jean-Claude Juncker declared “Borders are the worst invention ever made by politicians.”
The comparison of the means possessed by the various actors is also very revealing. The European agency Frontex, in charge of protecting Europe’s borders, has a budget of 500 million euros, a sum inferior to that of immigrationist organizations subsidized by billionaires like Soros but also by public institutions, such as the European Union, governments, and the regions.
So who wants this great replacement? It is true that more and more elected officials are publicly saying that they want to limit immigration. But, as it happens, the law is largely of a jurisprudential nature. It therefore pertains to the European Court of Human Rights, the Constitutional Council, the Council of State,[13] the Court of Cassation, or the National Court for Asylum Law.
This superiority of the courts over government power was particularly well illustrated by the case of family unification: instated by the Chirac government in 1976, the following government tried in vain to abrogate it. In vain, because the new decree was invalidated by the Council of State. Thus, for forty years since, family reunification has continued to be applied.
The same has occurred for the right of asylum, originally meant to protect small minorities persecuted in their home countries. It has become a convenient way to move to France because the courts are building, decision after decision, a legal system extremely favorable to foreigners. Thus, unlike in cases of ordinary law, they do not have to prove their claims whether concerning their identity or establishing the reality of the persecutions which they claim to have suffered in their home country.
Does this mean that the political authorities are impotent? In reality, on the question of immigration energetic measures are indispensable: the rights of peoples to their historic continuity and to their civilization needs to take precedence over the individual rights of man. The State must stop subsidizing immigrationist organizations and abrogate the Pleven laws[14] and others which prevent free debate on a question that is so vital for the future of our people.
By refusing to take such measures, government and parliament are allowing, whether they intend to or not, the Great Replacement to take place.
Notes
[1] Jacques Dupâquier (ed.), Histoire de la population française (Paris: PUF, 1988), 4 volumes.
[2] Jacques Dupâquier (1922-2010) was a French historian and a member of the Institut de France (Academy of Moral and Political Sciences), specializing in the history of populations and demographic history.
[3] Translator’s note: referring to the barbarian invasions at the end of the Roman Empire.
[4] Translator’s note: The Conseil National de l’Audiovisuel, the High Council for Audiovisual Media, the television and radio regulator.
[5] Translator’s note: Institut national d’études démographies, National Institute of Demographic Studies.
[6] Translator’s note: Institut national de la statistique et des études économiques, National Institute for Statistics and Economic Studies.
[7] Translator’s note: a département, or county, northeast of Paris which is now overwhelmingly inhabited by Africans and Muslims, and has become a byword for crime, urban decay, and ethno-cultural replacement. The département is home to the Basilica of Saint-Denis, in which all but three kings of France are buried. Just last month, the basilica was vandalized by intruders: stained-glass windows were broken and the organ damaged.
[8] There were 240,000 visas granted, 120,000 asylum requests, and 50,000 “isolated minors.”
[9] Jérôme Fourquet, L’Archipel français: Naissance d’une nation multiple et diversifiée (Paris: Éditions du Seuil, February 2019).
[10] Translator’s note: the “legal country,” embodied in political, judicial, and administrative elites, and their norms and values, in contrast with le pays réel, the real country, the actual people and its values. These terms were coined and popularized by Charles Maurras.
[11] Translator’s note: the Tribunal de grande instance to Paris’ seventeenth chamber is specialized in matters dealing with the press and, therefore, innumerable cases dealing with censorship, whether of ‘hate speech’ or libel.
[12] Translator’s note: the Conseil Constitutionnel, France’s highest court, found the far-left Cédric Herrou not-guilty despite having been arrested multiple times for helping some 250 migrants cross into France from Italy. He has become an icon of the left.
[13] Translator’s note: the Conseil d’État advises the presidency on judicial matters and is the supreme court for administrative justice.
[14] Translator’s note: the Pleven laws (dating from 1972) form the foundation of France’s censorious ‘hate speech’ legislation.
Posted by seemorerocks at 18:50