This guy must have had more than nine lives.

We were told that ISIS is on its last legs. No it is not, largely due to the Americans flying them around where they want them.

Now they are raising their heads again.


The world’s most wanted man - Abu Bakr al-Baghdadi – has seemingly appeared in a new video for the first time in five years.

The Islamic State terror group's propaganda arm released footage of its elusive leader making a speech. He talked about the battle for the final ISIS stronghold in eastern Syria and the bomb attacks in Sri Lanka. 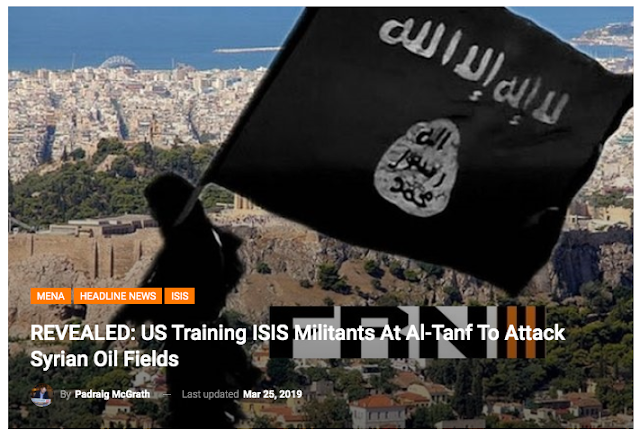 DAMASCUS – According to sources in the Syrian government army, several thousand militants of the Islamic State (outlawed in Russia), who previously surrendered outside the settlement of al-Baguz on the eastern bank of the Euphrates, were transported to the At-Tanf zone through the territories of Iraq and Jordan under the American escort. Those were mostly people from local tribes dwelling in the Syrian and Iraqi territories. Their families and relatives were sent as hostages to Al-Hol camp in Al-Hasakah province.

Most militants were sent to training camps that account for at as many as ten in the American-occupied territory. There are representatives of the group known as “Majmuat Abu Husam” actively working with them. This is sort of “Bedouin special forces” created by Arab employees of American private military companies in Iraq who later joined ISIS.

In exchange for the possibility of amnesty and the well-being of their relatives, the militants are demanded to take part in an operation aimed to establish control over the territory of the so-called White Desert. What is primarily meant here is the attack against the infrastructure of crude oil extracting and processing in the Homs province, namely the districts of Jisal, Ash-Shair, Mahrur and Tvenan north of Palmyra, as well as the Khneifis phosphate mines. These territories have fallen under control of government troops with the support of Russian aviation in 2017 and remain an extremely attractive target to ISIS terrorists and their patrons.

Apart from that, the Americans are interested in the elimination of government posts along the strategic Deir ez-Zor – Damascus route. Currently, militant groups of the Islamic State that came here through the At-Tanf zone are already demonstrating their aggressive behavior in the White Desert. Over the past ten days, at least twenty Syrian soldiers have been killed in such attacks.

Government forces backed by the Russian airpower continue to locate and destroy the remnants of armed terrorist gangs in the area. According to the Syrian command, about 150 militants, 20 cars with machine guns and 15 motorcyclists have been eliminated in the White Desert in March alone. However the terrorist activity in these areas is not being reduced. Taking advantage of the difficult terrain, a lot of caves and other shelters, the gangs are constantly welcoming reinforcements from At-Tanf, equipping munitions depots and accumulating forces for massive attacks.

The second American focus area, according to the Syrian authorities, is the seizure of territories in central Syria by Kurdish formations of the Syrian Democratic Forces (SDF), established with backing from the Pentagon. Upon completing the armed hostilities in the area of al-Baguz, the SDF command and American instructors refused to send the Kurdish and Arab fighters away, under the pretext of needing them for another landmark operation “against ISIS”. On the outskirts of Raqqa, CIA officers secretly gathered influential sheikhs and invited them to take part in the fight against terrorists west of the Euphrates in exchange for future revenues from the mineral deposits located there. Tribal leaders were promised significant positions in the “confederated democratic state”, which is planned to be created on both sides of the Euphrates under cover of regional US allies.

In the White Desert the Pentagon is obviously working on a plan previously tested in Eastern Syria: to oust the government forces with the hands of terrorists, and then to establish control over the territory of strategic importance and rich in natural resources with the help of Kurdish forces. And that explains why the United States has so stubbornly refused to permit the evacuation of refugees and eliminate the Rukban camp located next to Al-Tanf: under this guise they are training militants to continue their struggle with the Assad government.


Baghdadi Is Back And Turkey Might Be His Next Target

Abu Bakr al-Baghdadi, self declared caliph of ISIS, appeared in new video published today. These are the first pictures of him since some three plus years ago. He mentions the defeat in Baghouz. A speaker in the video, not Baghdadi, mentions the recent attacks in Sri Lanka which killed over 250 people and the recent ouster of Omar al-Bashir in Sudan. A short excerpt of the 18 minutes long video can be seen here.
There are three disguised people Baghdadi is talking to. The video is heavily edited and it appears that it was filmed in many takes. The visible walls are of drapery but do not seem to be the inside of a tent. The ground is flat. The light is artificial. The sound is solid but has no echos. This was probably filmed in a room of a larger house.
The gun to his right is a Kalashnikov AKS-74U with a large (45 rounds) magazine:

US journalist C. J. Chivers reported that the gun was nicknamed "the Osama" in jihadist circles, after Osama bin Laden was photographed next to an AKS-74U.

Pictures of the (now dead) leader of Al-Qaeda in Iraq Abu Musab al-Zarqawi showed the same type of gun. It is not a very practical weapon but demonstrates Baghdadi's heritage.
Baghdadi accepts the oath of loyalty from groups in Mali, Burkina Faso, Afghanistan and Sri Lanka. Written text in the video says that the attack in Sri Lanka was in retaliation for Baghouz in Syria where ISIS made its last stand. It claims that the ISIS jihadists did not hand over any area and died fighting to the end in Sirte, Mosul, Raqqa and Baghouz. At least the claim about Raqqa is wrong. When the U.S. destroyed Raqqa some 2-3,000 ISIS fighters negotiated their exit with the U.S. proxies on the ground and moved south-east to attack the Syrian army.
Baghdadi says that ISIS will eventually win in a war of attrition against the "Crusaders". This points to a continuous, geographically dispersed terror campaign after it no longer holds any ground. At one point one of the three other people gives him a folder with some plans. The folder is marked Wilayat Turkey. (Wilayat means province of the Islamic State).

Baghdadi looks well fed. The reports of him ailing and thin are obviously wrong. His face and hands and those of his guests show no signs of harsh weather or even sun exposure.
One wonders whose guest he is.